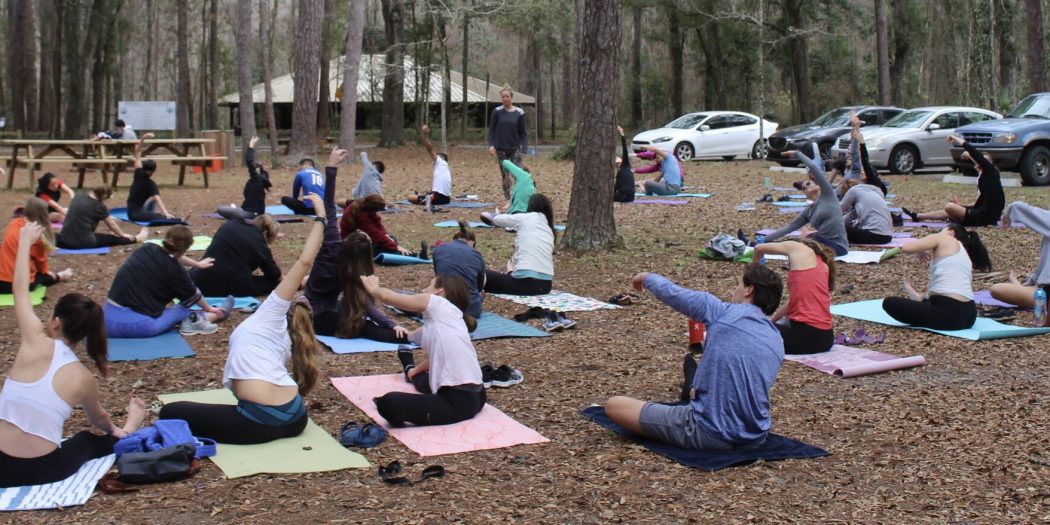 Maggie Rucker, 25, leads the class in deep breathing and beginners stretching to start off her free yoga class in the park. It takes place the first Saturday morning of every month. (Anastasia Sims/WUFT News)

Devil’s Millhopper Geological State Park, and its most popular attraction, is still recovering from the damages caused by Hurricane Irma. But that’s not stopping the Gainesville public from enjoying the park.

The 232-step staircase that descends into the ancient sinkhole remains closed to the public, although construction of a brand-new boardwalk began January 22.

The original renovations were scheduled to begin sooner but were postponed until the new year after Hurricane Michael wreaked havoc through the Florida Panhandle in early October. The project is expected to be completed sometime in the summer.

Jesse Natwick, a park ranger at Devil’s Millhopper, said park management thought the boardwalk would only need partial renovations. However, after engineers assessed the damage, they concluded that the entire boardwalk would need to be rebuilt.

The park has seen fewer visitors over the past two fiscal years, said Weesam Khoury, the spokesperson for the Florida Department of Environmental Protection. But the Florida DEP does not directly attribute the decrease in visitation to the impacts of the storm.

Numerous factors play into park attendance such as holidays and school schedules, Khoury said. There are typical patterns of visitation that reoccur yearly.

The park still offers a view of the sinkhole with a limited access nature trail and has the same operating hours from 9 a.m. to 5 p.m. Wednesday through Sunday.

“We are all bummed out about it too,” Natwick said. “We miss the sinkhole just as much as we miss the people.”

Before the storm, locals would commonly use the boardwalk for exercise, Natwick said. Visitation may be down, but the Gainesville community still uses the park regularly.

Despite the closed boardwalk, people from across Gainesville come to walk their dogs, enjoy the outdoors or participate in the events offered by Devil’s Millhopper, such as tai chi and Saturday morning yoga classes.

The outdoor activities are part of Florida Park Fit, the Florida State Parks’ initiative to offer alternatives to traditional gyms and help Floridians reconnect with the outdoors.

These two classes became a part of the park’s regular routine about two years ago, Natwick said. The main goal behind them is to attract people who normally wouldn’t visit the state park.

When the park began offering yoga, Natwick said, most of the people who came to the first few classes had never stepped foot in Devil’s Millhopper Geological State Park before.

Maggie Rucker, the voluntary yoga instructor, said she still remembers when she put up the first Facebook event for yoga in the park.

“It blew up,” she said. “I remember thinking that it’s crazy that there was such a big desire for something like this.”

About 100 people turned out for the first ever yoga in the park, Rucker said. Now, the events usually attract about 50 people.

Rucker connected with the state park through one of her students at Flow Space, the yoga studio she manages. She met Natwick, discussed what the classes would look like and has been instructing them ever since.

The 25-year-old Gainesville native has always loved the outdoors and has visited the park since she was young. That’s why she wanted to join the park in creating a low-risk, “come as you are mentality” class.

“These classes are made for the local community to come, enjoy and have a unique experience with nature,” Rucker said.

Sebastian Ellios, 25, only recently started attending yoga in the park. He’s a member at Flow Space and heard about the event through their classes.

Devil’s Millhopper Geological State Park is the perfect setting for the class, Ellios said. There’s nothing like practicing yoga outside.

“It really allows you to connect with nature and find our inner stillness,” Ellios said.

Rebecca Nyros, 50, a Gainesville local, has attended yoga in the park since the first class was offered.

Even though the park’s main feature is closed, Nyros still shows up the first Saturday of every month for yoga.

Practicing yoga outside can sometimes be difficult Nyros said. Noises like bird’s chirping or people talking make it hard to be in tune with the class. However, she’s learned to love the fresh air and being outdoors, just like Natwick had hoped.

Nyros said the class is easy and the perfect thing to invite friends to, even her Buchholz High School sophomore daughter enjoys it. She loves seeing others bring new people.

“It’s just really nice to be outside,” Nyros said.

Anastasia Sims is a reporter for WUFT News. Follow her on Twitter at @anastasiacsims. You can reach her at 352-281-1141 or 352-292-NEWS.
@anastasiacsims
Previous Waldo Motocross Park Serves as Winter Home for Aspiring Riders
Next Gilchrist County Elementary Students Are Using 3D Printing To Make Valentine’s Day Crafts And Much More