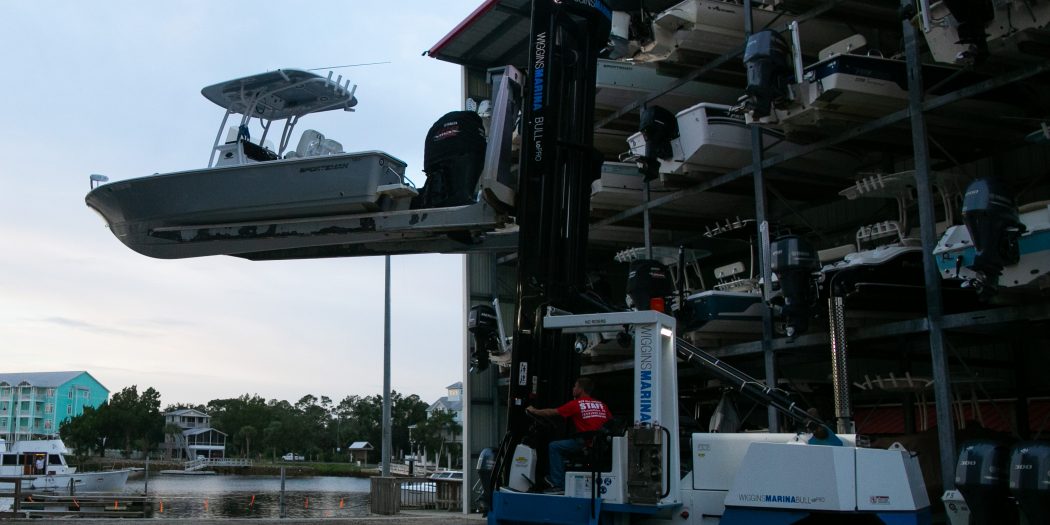 Workers at the Sea Hag Marina in Steinhatchee hastily prepare for Hurricane Matthew on Oct. 9, 2018. Hurricane Hermine in 2016 left several boats floating down the street after the marina flooded. (Cat Gloria/WUFT News)

Steinhatchee Marinas Prepare For The Worst With Hurricane Michael

Owners of Good Times Motel and Marina recently finished rebuilding their business after it flooded during Hurricane Hermine two years ago. Now, an even stronger hurricane – Michael – is on track to undo the repairs.

As of Tuesday afternoon, Category 3 Hurricane Michael packed winds up to 120 mph and was headed for Florida’s Big Bend. The state called for a mandatory evacuation of many coastal towns along the curve, Steinhatchee being one of them.

“Everything in here is pretty much brand-spanking-new,” said Kitty McCaulley, manager of Good Times Motel and Marina. “For my job and the people here, I want to make sure I have something to come back to after the hurricane.”

McCaulley said Hurricane Hermine caused storm surge of about 4 feet in the motel. She came back to find food floating around the storeroom and furniture soaked. Hermine was only a Category 1.

After finally completing repairs in April, McCaulley said the hotel managers are taking no chances with Michael. They’ve rented several U-Hauls to transfer furniture and merchandise to higher ground.

“This is our livelihood, this is our job, everything here is important to us,” she said.

The Sea Hag Marina sits right across the lake from Good Times. It also suffered flooding from Hermine, reaching about 6 feet of storm surge, said owner Charlie Norwood. The storm cost Sea Hag Marina about $500,000 in damages and washed boats onto the street, he said.

Norwood said he didn’t prepare for the amount of water that came with Hurricane Hermine.

“We’re not going to let that happen again,” he said.

In preparation for Hurricane Michael, Norwood and his employees began moving merchandise and boats Sunday, three days before the expected impact. He said he plans to weather the storm at home.

“As long as the track doesn’t change and bring us the wind, if it brings us the wind there’s no telling,” Norwood said.

Steinhatchee residents flooded the aisles of the local supermarket, but many, like Norwood, aren’t worried enough to evacuate.

Farmer Terry Smith said he owes it to his animals to stay home during the storm.

“If the water gets high like that, someone’s got to turn the hogs loose to be humane, so they can fend for themselves,” Smith said.

Smith said his house didn’t flood during Hermine and only one tree fell.

“The one tree I didn’t take down before Hermine fell on top of the house,” he said. “My wife and I didn’t even hear it until it knocked the clock off of the wall.”

Smith is more concerned for what might happen after Michael passes.

“The biggest fear I have is someone coming in and cleaning me out when I’m gone,” he said.

Residents in need can evacuate to the local shelter at Taylor County Elementary, which opened at 2 p.m. Tuesday. Officials expect Hurricane Michael to bring a storm surge of 8 to 12 feet in some locations.

Cat is a reporter for WUFT News and Fresh Take Florida who can be reached by calling 954-657-3385 or emailing cgloria@ufl.edu.
Previous Oct. 9, 2018: Evening News In 90
Next Cedar Keyers Prepare For Michael With Hermine In Mind