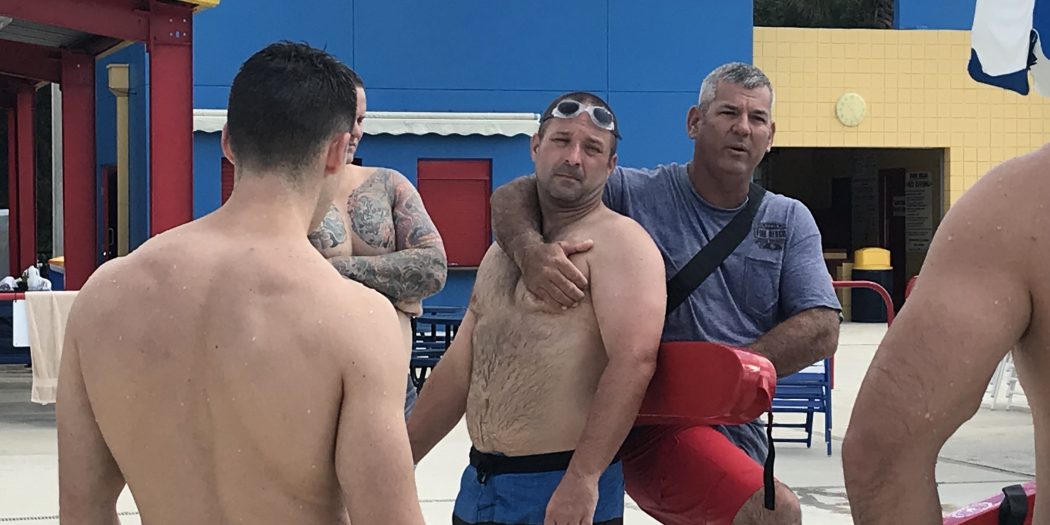 Training instructor Robert Osteen, right, demonstrates how to rescue someone from a pool. (Valerie Lyons/WUFT News)

Ocala Fire Rescue took over a community pool for three days this past week cooling off under the hot Florida sun and getting in hours of aquatic rescue training.

Firefighters from all six of Ocala’s fire stations came out to Jervey Gantt Aquatic Fun Center located at 2390 SE 36th Ave Tuesday, Wednesday and Thursday to learn how to rescue civilians, and themselves, from an aquatic environment.

“Depending on what part of the nation you’re in, it might be more relevant,” said Ocala Fire Rescue spokeswoman Ashley Lopez. “But ponds, pools, even a basement, you never know what will happen, or even a case of flooding, which could affect anyone in the U.S. – they would be prepared.”

In each rotation, members of Ocala Fire Rescue took turns as patient and rescuer in different mock situations, providing the participants with the necessary knowledge needed when responding to victims in varying states of mobility and behavior.

In victim assessment, firefighters were shown how to properly rescue civilians from different bodies of water, such as pools, retention ponds or flooded storm drains. The station also instructed responders on how to react if members of fire rescue fall into water and become immobilized, Lopez said.

Fire Rescue relies on the backboarding technique if and when civilians have spinal injuries and appear to be unresponsive. The firefighters were taught how to safely secure patients on to the backboard, which is similar to a stretcher or gurney, and move them out of the water.

Robert Osteen, training captain with Ocala Fire Rescue, said because responders don’t have to enter the water, throwing rope bags is perhaps the safest method for firefighters when rescuing civilians.

“We teach them how to throw bags, and they actually have to make multiple throws, so if they miss the first one they are able to pull it up and make the second throw really quick,” Osteen said.

The final station trained the firefighters in how to utilize their gear and air packs, which they would typically wear when entering flame-filled buildings and vehicles, in situations where water submersion becomes unavoidable.

If Fire Rescue is working a vehicle accident around a retention pond and one of the firefighters falls in, each member of the team needs to know what to do, Osteen said.

“They know the gear floats for roughly a minute, for the most part, so it does give them some time to make their way back to shore,” he said. “Worse case scenario they have to get out of the gear, which is what we simulate here.”

The Wednesday session of aquatics training was the first for Macky McCadden, a 15-year Ocala Fire Rescue veteran and driver at Station 4, having done the swift water tech class last year. He said learning how to work with his gear and equipment in the water was his most beneficial takeaway from the exercises.

“Sometimes when we’re doing 360s roundhouse, maybe dark, smoky conditions and you can’t see a pool and you may fall in, it’s something real that we may encounter, and it’s good to know that we can trust our gear and not drown,” Mcadden said.

McCadden, like many others who have been in the department for years, have never needed to put their aquatics training to use, but Osteen believes that responders knowing what do in water-related situations is a benefit not only to fire rescue teams, but to every member of the community.

Ocala Fire Rescue began the aquatic rescue training in 2016, and plans to continue it every two years. By allotting three days for the exercises to take place, the department sees that the majority of its members are given enough time to attend a session.

“I think the public should feel very safe and very happy about us being proactive in these training measures,” Lopez said. “Although we don’t encounter them on a regular basis, just knowing that we have the knowledge needed to get either the patient or the firefighter themselves outside of that situation should be comforting.”