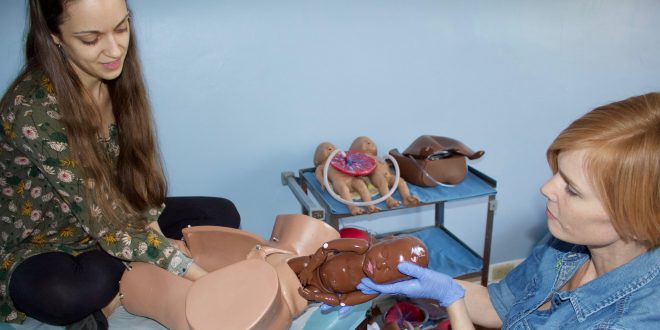 Ana Jakupko is due to have a baby girl in early January, and she wants her daughter delivered in her Alachua County home by midwives from the Midwives Cooperative.

The 39-year-old said this would be her third pregnancy using a midwife. For her son, who is now 8 years old, she received prenatal care from midwives at the Birth Center of Gainesville. But he came early, so the actual birth was performed at a hospital.

After recovering from her miscarriage with the help of the cooperative’s midwives, Jakupko said she is looking forward to the flexibility of giving birth in her own home.

“People handle pain differently,” Jakupko said. “When I’m in pain, I like to pace around the room, and at home, I can do that. With a midwife, you have more choice with how things will go. They are a little more hands-off.”

Although the Florida Department of Health’s 2016 Florida Vital Statistics Report does not show a significant increase in out-of-hospital deliveries in Alachua County, local experts in midwifery say the practice is becoming more popular among expecting mothers and those wanting to become midwives themselves.

Meanwhile, nationwide, the percentage of out-of-hospital births has risen to 1.5 percent in 2014 and 2015 from 2007’s 0.9 percent, according to the Centers for Disease Control and Prevention’s 2015 National Vital Statistics Report. The report also shows the number of births occurring at home in 2015 (38,542) was the highest reported since 1989, the year reporting began.

“Part of it is that people are pursuing less [intervention-based], more patient-led care,” said Abby Reichardt, who is in the final stages of getting her midwifery license from the Florida School of Traditional Midwifery in Gainesville.

Applicants to the school have been growing noticeably, said its academic director, Erica Bales.

“Interest in midwifery has definitely gone up,” Bales said. “We get about 30 to 40 applicants per year, and that’s been in the past five years or so. Before that, we would probably get about 15 to 20 per year.”

In 2009, the school started accepting financial aid, and applications have increased every year since then, she said.

“That’s when we really saw a bigger up-kick in people,” Bales said.

Reichardt suspects that midwifery is gaining recent traction also because Floridians who choose to give birth at home using a licensed midwife are now eligible for reimbursement by private insurers and by Florida Medicaid.

“Midwifery care saves the state and insurance companies a lot of money,” she said.

Kerri Audette, clinical director at the Florida School of Traditional Midwifery, said the average cost for uncomplicated, in-hospital birth is $14,000, while a home birth with a midwife is about $6,000.

The U.S. has two types of midwife certifications: Certified Nurse-Midwives, or CNMs, and direct-entry midwives, according to the Midwives Alliance of North America, a professional association that promotes professional development and continuing education for midwives.

CNMs are trained in both nursing and midwifery. Their training is hospital-based, and most go on to practice in clinics and hospitals, according to the Midwives Alliance.

Direct-entry midwives, however, are not required to have nursing certification. They’re trained to provide the Midwives Model of Care to healthy women and newborns primarily in out-of-hospital settings, according to the alliance.

The Midwives Model of Care includes:

Florida has licensed midwives since 1931, according to Citizens for Midwifery, a national nonprofit that promotes the Midwives Model of Care. To become licensed in the state, an applicant must attend a three-year program of academic and clinical education and pass the national certification examination for state licensure.

Kathleen Green said she supports those who become midwives, but that they should be helping give birth only in hospitals, not also in homes.

Home births greatly increase health risks during delivery, and LMs do not have enough adequate resources to respond to complications, said Green, an assistant professor of obstetrics and gynecology at the University of Florida.

“We are not set up in the U.S. to perform safe home births,” she said, “and research has shown that time and time again.”

When a birth is performed at a hospital, the necessary resources are available to help both the mom and the baby, Green said.

“Sometimes [OB-GYNs] get a bad rap, and people feel that we force things on them,” Green said. “I will support anything a mom wants, as long as it’s safe for both mom and baby.”

But for Jakupko, the mom who’s soon to deliver again, going to the hospital can be scary. She said it’s important for her that birth is treated as a natural process of life.

“I live a very holistic, conscious, natural way of life,” she said. “I try and cure any sicknesses in my home with natural medicine. I’d rather be in the comfort of my own home than going to the hospital.”

Lizzie is a reporter for WUFT News and can be contacted by calling 239-206-7425 or emailing evasquez23@ufl.edu.
@lizziemvasquez
Previous After New Principal Steps In, Failing Streak Stops At East Gainesville School
Next No Easy Street