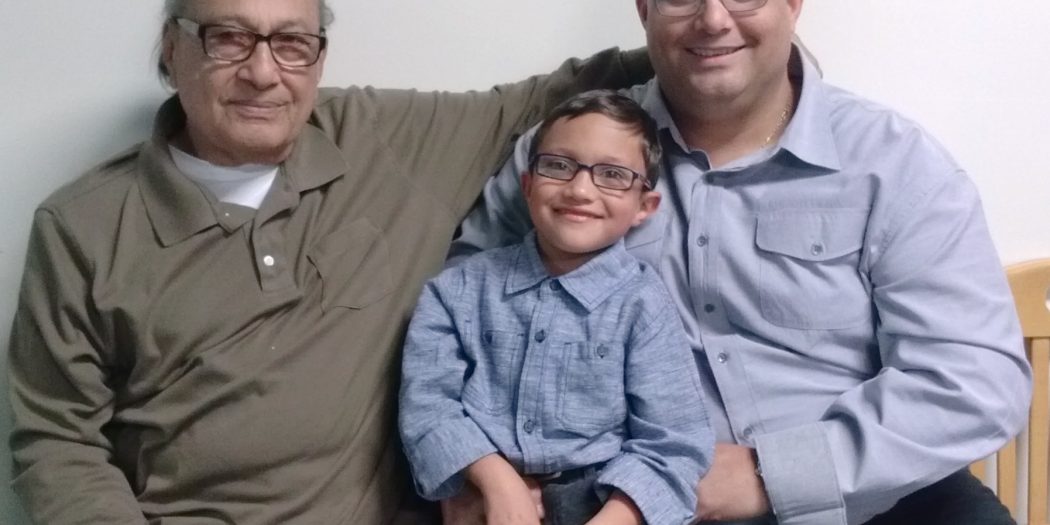 José Rios (left), Rhaer Nieves (middle) and Ernesto Nieves (right) celebrate Rhaer's birthday. Both Rios and Nieves served in the military. Nieves stayed a the Gainesville Fisher House after his father was flown from Puerto Rico to the Malcom Randall VA Medical Center in Gainesville for a heart procedure. (Jessica Giles/WUFT News)

José Rios has suffered from health problems for years, but it wasn’t until Hurricane Maria passed over Puerto Rico that his symptoms grew dire.

As the storm ravaged the island with damaging wind and torrential rains, the 81-year-old Korean War army veteran started to experience severe chest pain. He was taken by ambulance October 1 to the VA Caribbean Healthcare in San Juan, where he stayed for four days before being airlifted to Malcom Randall VA Medical Center in Gainesville, Fla.

When Ernesto Nieves learned his father was flown to Florida, he packed his things, rented a car and began the 18-hour drive from his home in Watertown, New York to meet his father and brother at the hospital in Gainesville.

While scrambling to find a hotel for his stay, Nieves found the Fisher House — a home for the family members of veterans who are staying at the Randall VA Medical Center. He was relieved to find they had a room for him.

“The first madness right there was finding a place to stay,” he said, “because most of the hotels close to here, there was no chance.”

Nieves said finding the Fisher House was a blessing.

“It’s not a hotel, it is a home,” he said. “There are other people here going through the same things.”

Since it opened for guests on July 7, 2014, the Gainesville Fisher House has provided a free place to stay for families of veterans. Located on the northwest side of the hospital, the 20-bedroom, two-story house is typically full, operating between 95 to 97 percent capacity, said Michelle Howard, house manager.

In order to qualify for lodging at the house, guests must live at least 50 miles away and have a family member hospitalized at Malcom Randall VA Medical Center, Howard said. Although they do not typically have to turn people away, there have been times. Last April, they had an extensive waiting list, she said.

After traveling more than 1,200 miles to be with his father, Nieves was thankful for the help. He said he was unsure where he would have stayed if the Fisher House was not available.

Having his son nearby helped to calm Rios’ nerves. Coming from Puerto Rico, he was anxious about his condition and undergoing a procedure in an unfamiliar place.

“All that worrying and all that concern eased up because at least he had his family there,” Nieves said, while translating his father’s words from Spanish to English.

Rios received a transcatheter aortic valve replacement during his stay. The Gainesville VA specializes in cardiology among other treatments and procedures.

This heightened demand for veteran services in the region is mirrored by the addition of Fisher Houses. There are currently 72 Fisher Houses around the country with eight more in the works, said David Coker, president of the Fisher House Foundation. Two of these new houses will be erected in Florida — one in Orlando at the Orlando VA Medical Center and another in Tampa at the James A. Haley Veterans Hospital.

This year, the Fisher House Foundation is on track to help about 30,000 families, Coker said. While the average length of stay is nine days, the longest was just shy of three years. The ability for families to stay at the Fisher House for no cost is made possible through a unique public-private partnership, he said. Coker believes in providing free, convenient housing for the families of veterans that are faced with a health crisis.

“We think that the people we serve have paid it up front,” he said.

Most of the money that funds the operations of Fisher Houses comes from the public that it serves, Coker said.

“This is still a grateful nation and there are a lot of people who want to help and bless the military.”

Nieves stayed in the Gainesville Fisher House for a week, but it did not take that long for it to feel like home, he said. The house offered more than just a roof over his head, it became a support system for him to lean on when he needed it.

During his stay, Nieves met a woman whose mother was having the same surgery as his father.

“I think that is the key, having all these families here at the same time,” he said. “You’ve got a home.”

Nieves said that talking with other people in the house and sharing personal experiences helps to get through the difficult moments.

It is a sentiment echoed by the staff. Howard believes the familial bonds that are created among guests are long-lasting and an important aspect of the Fisher House.

“They are so appreciative of the comfortable bed, but more so the family that they made here,” she said.

Nieves checked out of the Fisher House when his father was discharged from the hospital October 17.

His feelings of gratitude, however, won’t fade anytime soon, he said.

Jessica Giles is a WUFT reporter and can be reached at jgiles1597@gmail.com or 386-717-2378
@@jessica_giles_
Previous Gainesville City Commissioner Asks Officials To Evaluate Expenses Caused By Spencer Event
Next Nov. 6, 2017: Morning News in 90