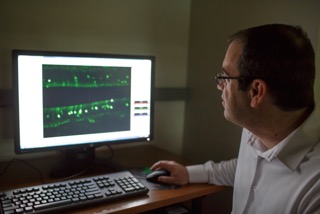 For Sawyer Lang, the phrase “stop and smell the roses” has never held much meaning.

But the 19-year-old and others with smell disorders could soon get some help through the new smells disorder program, created by University of Florida Health and UF’s Center for Smell and Taste.

“When I was four years old, I was walking around our garden and my mom told me to smell the flowers but when I sniffed the flowers, I didn’t have any sensation,” said Lang. “Because I didn’t know any better, I wasn’t alarmed.”

While the program’s research is already underway, the brick-and-mortar clinic, located at 200 SW 62nd Blvd., is set to open in January.

The program, which will be one of only three programs nationwide, aims to provide clinical and educational support for people with loss or impairment of sense of smell.

Loss of smell can cause safety issues — like the inability to smell a gas leak, fire or rotting food — and social and emotional ones, too.

The new program was conceived after a need for more information was expressed by the public during Smell Taste 2017, an event co-hosted last February by United Kingdom-based charity Fifth Sense and UF’s Center for Smell and Taste.

The event provided the opportunity for those affected by these disorders to learn more about their condition.

“That engagement between patients, scientists and clinicians enabled us to create a new resource that would not have been possible if the patients hadn’t been involved,” said Munger.

The center has also ordered an olfactometer— a $25,000 instrument that presents odors to patients in systematic way which allows doctors to understand extent of smell function.

Other methods, like scratch-and-sniff tests, aren’t as robust and quantitative, Munger said.

“Think about your family dinner, holidays, going out with friends; so much we do is about food,” Munger said. “There’s also social isolation that comes from not having that mode of communication.”

Odors affect lives in many different ways, from a mother and father smelling their newborn baby, to smelling our partners, to enjoying the emergence of flowers in the beginning of spring, Munger said.

Sophie Martyn, 48, has noticed these effects in her everyday life since she lost her sense of smell two and a half years ago after suffering a common cold. Loss of smell also affects the ability to taste.

“It completely changed the taste of my food and took away my connection to memories that are accessed by a smell trigger,” said Martyn, who sought medication to cope with the resulting depression.

Medical personnel were dismissive, Martyn said, advising her to accept her situation.

She hopes that new facilities, like those that will be available at UF, will be affordable.

Joel Robinson, 40, has also found many doctors he has seen in the past to be unhelpful.

He is now on anti-depressants and has sought counseling to cope with his smell disorder, which appeared after sustaining a fall and hitting his head.

“It’s as debilitating as losing sight or hearing in my opinion,” Robinson said.

He suffers from parosmia— the inability to properly identify an odor and instead, perceiving an unpleasant smell, often described as being comparable to rotting.

Long term cures, like gene therapy for congenital smell loss or stem cells for post-trauma or post-viral smell loss are being researched, but are still a long way off, according to Dr. Jeb Justice, an assistant professor of otolaryngology in the College of Medicine.

Justice calls his work simultaneously an honor and a challenge.

“I’m honored to be part of a great team but I know that we will face a challenge if we are unable to improve patients’ sense of smell,” he said.

In the meantime, UF doctors aim to provide good care, support and information to help improve patients’ quality of life while actively searching for cure.