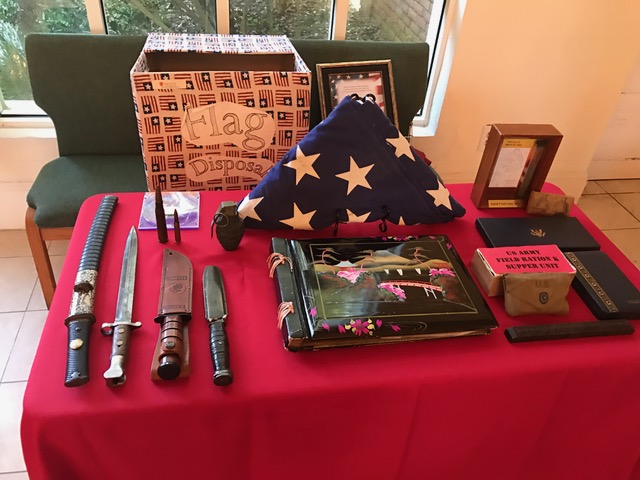 For the first time in Gainesville, World War II veterans are now being cremated along with an American flag. Like the veterans, the flags each have a unique, long history and is ready to be retired.

The new program started today to honor the 72 anniversary of the ending of World War II and its veterans.

Ten years ago, WWII Veteran, Bob Gasche, decided that too many flags were being thrown away against the federal flag code, and he wanted to honor them.

“So I thought well maybe if we got some boxes and put some patriotic paper around them and distribute them with permission from the owners of the buildings, we would be able to get flags and dispose of them properly,” he said.

Since then, 92-year-old Gasche has collected thousands of flags in Alachua County with the help of other veterans.

Jon Thomas, vice president of Forest Meadows Funeral Home where the program began, decided to partner with Gasche to ensure that every WWII veteran who is cremated at Forest Meadows is buried with an American flag. The ceremony will also be important for the families of the veterans.

“Prior to the cremation we are going to remove a star from the flag, and the family will receive that back on a plaque,” Thomas said.

Thomas also said that the community is reaching a point where honoring World War II veterans is extremely important.

“There are a lot of veterans in this community, and specifically veterans from World War II,” he said, “and you know we see a lot of those folks coming to the end of their life as we come towards the end of that generation,” he mentioned.

Retired Director of Alachua County Veterans Services Jim Lynch wanted to take the time to honor the millions of men and women who were killed in WWII.

Lynch, a Vietnam veteran, has a personal connection to WWII as well. Lynch’s uncle, on his father’s side of the family, was killed serving the country in World War II.

“They gave up all of their tomorrows so that we could enjoy our today’s freedom,” he said, “and that’s one of the purposes of having the ceremony here today.”

Vickie Van Buren, a Vietnam veteran, is the commander of the 4th district of the American Legion. She explained how burning the flag in previous ceremonies was a very special moment.

“The flag is then set on fire and it’s a very solemn moment as that flag is burning and being retired,” she said.

Van Buren said she hopes that honoring both the veteran and the flag becomes common place throughout the entire country.

Gasche is excited for the new program and is expecting very positive feedback.

“It’s a tremendous program,” he said, “and it’s going to be well received because I’ve already told several veterans about it.”

Morgan is a reporter who can be contacted by calling 352-392-6397 or emailing news@wuft.org.
Previous UF Opens Door To White Nationalist Speech
Next State Officials Prepare For ‘Dangerous’ Irma