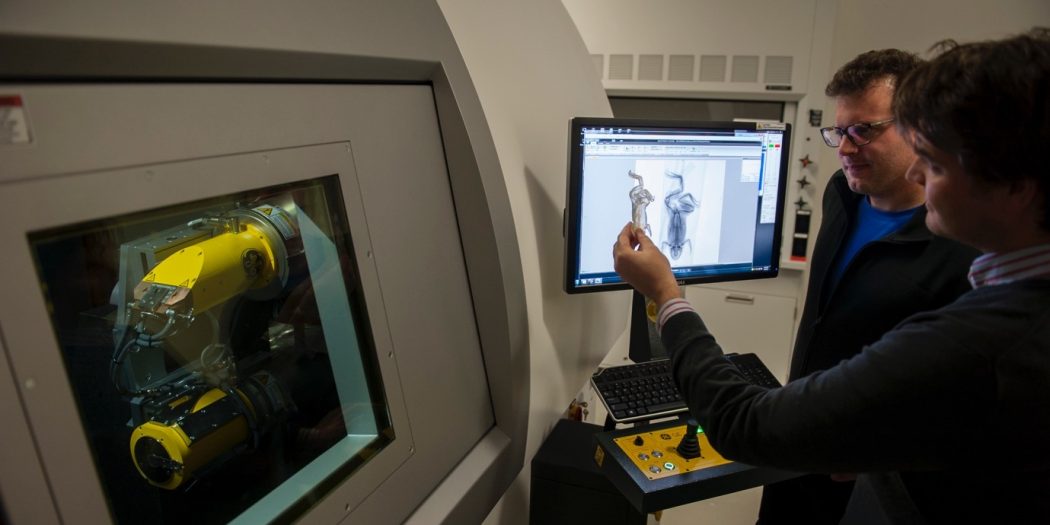 David Blackburn and Edward Stanley compare an actual frog specimen to the 2-D CT scan. This will allow them to compile thousands of photos to recreate the 2-D scan into a 3-D image. (Photo courtesy of Edward Stanley)

Many museums, including the Florida Museum of Natural History, are in the process of digitally storing specimen X-rays as 3-D models.

Thanks to project oVert (short for openVertebrate), now researchers can gather thousands of X-ray photos from various species and display them as interactive 3-D models online after processing with CT scanning technology.

These models provide comprehensive information for each individual species, ranging from bone structures to the anatomy of the cardiovascular system.

It will encompass the vertebrae collections from 18 different institutions.

Stanley said many museums have been utilizing this technology for years.

“With digital information, we can actually put that information up online and democratize it,” Stanley said. “So the leading expert in the field has access to this data, but then so does a high school student doing a science project.”

The project starts Sept. 1. At the end of the grant, 20,000 vertebrate species will be added to the MorphoSource database, which is free and accessible to the public.

Although a large portion of the website’s traffic is due to other scientists and researchers, the site has been popular among the general public as well.

“Probably more than half of the [thousands of] downloads that we get are from people that are not scientists,” Blackburn said.

There are several ways to take advantage of this research’s benefits, such as science teachers implementing 3-D images for interactive classroom lessons.

Lars Grant-West, an adjunct professor at the Rhode Island School of Design, downloaded various models of 3-D frogs for his creature lab class.

He stumbled upon Blackburn’s images while searching for resources to show his students.

“This gives me a tool that I can bring into class,” Grant-West said. “I can show students skulls or models of things that are too small or too delicate or things I don’t have access to.”

He used a 3-D printer to create an upscale version of a frog skull to better illustrate the amphibian’s small and intricate features. It helped his students visualize and create more realistic models and illustrations.

While the Florida Museum of Natural History is taking a more biological approach to 3-D imaging, several museums have taken it beyond the realm of life.

The Smithsonian, for example, has utilized similar technology to create replicas of iconic artifacts, including this 3-D model of Apollo 11.

“I think it’s [3-D imaging] really going to open up an awful lot of interesting research at all kinds of levels,” Stanley said.