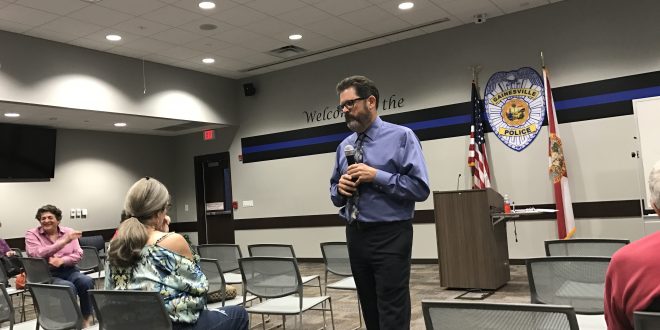 Gainesville Regional Utilities General Manager Ed Bielarski talks with about 20 Gainesville residents Monday night at the Gainesville Police Department about the city possibly purchasing the Gainesville Renewable Energy Center, known as the biomass plant. Another issue GRU is facing is the possible switch to its governance under bills moving through the state Legislature — a switch that Bielarski, who favors the current Utility Advisory Board, says he's opposed to. (Carly Breit/WUFT News)

A familiar bill that could bring a new item to Gainesville residents’ ballots in 2018 is making its way through the Florida Legislature this session.

Proposed three times before between 2014 and 2016, state Rep. Chuck Clemons is the latest to introduce a bill (House Bill 759) that would put a referendum on Gainesville ballots for citizens of the city to determine the future of the governance of Gainesville Regional Utilities, the biggest energy supplier in the county.

If the referendum is passed by a majority of city residents in the March 2018 elections, the governance of GRU would be shifted from the City Commission to a five-member independent board.

The five members would be appointed by the City Commission. All five would be GRU customers, and at least one would be from outside the city limits because about a fourth of GRU’s customers are in unincorporated Alachua County.

The board would have the power to, among other things, change utility rates, issue revenue bonds to finance or refinance utility projects, appoint a GRU general manager and determine the amount of money GRU gives annually to the city, according to the bill.

“All this is doing is putting forth an opportunity for the residents of the city of Gainesville to give a thumbs-up if they think that the [current] governance is appropriate and valid, [or] a thumbs-down if they think the governance should be done by another method,” Clemons said in an interview.

But opponents say that if the governance switch moves forward, the board could reduce the amount of revenue that GRU gives to the city annually — money that goes to firefighters, police and other city services — and could issue bonds held by the city without city commissioners’ control.

“I’m opposed to the bill because it is really House Republicans coming down here trying to force something on Gainesville residents,” city Commissioner Adrian Hayes-Santos said. “The Republicans are trying to create a bureaucratic, unaccountable board.”

When then-state Rep. Keith Perry, now a state senator, introduced a nearly identical bill in 2016, he did so on the reasoning that many GRU customers do not live within the city limits and thus are unable to vote for city commissioners, who oversee GRU.

Messages left for Perry at his office were not returned.

But people using Perry’s reasoning to support the bill should look to the current seven-member Utility Advisory Board, which has three members living outside of the city limits as well as one owner of a major business, city Commissioner Helen Warren said.

“We have more people on the board and more representation from the county and commercial enterprises — all the makeups of the types of professions that are being suggested by Clemons’ bill,” she said in an interview. “The only distinction is whether it is dependent or independent.”

The current board serves in only an advisory capacity and doesn’t have any direct authority over GRU.

Perry introduced the legislation three times previously — in 2014, 2015 and 2016 — but the 2016 state legislative session was the first time the bill made it to House and Senate votes.

It passed easily through both chambers: 106-8 in the House and 34-0 in the Senate. Yet despite the substantial bipartisan support it received, Gov. Rick Scott vetoed the bill, citing the clause that would pay members of the new board $18,000 a year for their service.

This year’s version of the bill — which has a necessary Senate companion bill (Senate Bill 1568) from now-Sen. Perry — does not include compensation for board members. But it’s still among committees and thus hasn’t yet been voted on in the two chambers.

Clemons said he has taken up the effort in the House because of the friction the issue has caused between city and county residents. He hopes that the 2018 referendum would put the issue to bed.

“It’s obvious that there is a division in the community over the governance of GRU,” Clemons said. A citywide vote “is the best way to solve and resolve that division on the community.”

City Commissioner Todd Chase said he is in favor of the bill because it simply puts a referendum on the ballot and lets citizens decide.

“This bill doesn’t have anything to do with actually changing governance,” said Chase, who will leave office in May because of term limits, but will still be there throughout the bill’s legislative process this year. “It is a bill to provide a referendum to allow the citizens of Gainesville to vote on changing governance.”

Opponents, he said, misdirect attention when they point to state legislators.

“What you’ll hear from the opponents of this is … that Tallahassee needs to stay out of this, and Tallahassee shouldn’t be changing the governance of utility,” Chase said. “And it’s an absolute falsehood.”

But Hayes-Santos said that’s how he views the bill: the state involving itself in a local matter. In addition, he thinks GRU authority should remain with city commissioners, who are elected, instead of commission-appointed board members, who aren’t.

“This is taking away the rights of citizens and putting them into an unelected board,” he said.

If residents have problems with how GRU is governed, they could vote out commissioners, Hayes-Santos said.

“Right now, if one of the commissioners does a bad job, they don’t get elected,” he said, “and that’s not the case with this board that is trying to be created.”

The bill would, though, allow commissioners to remove board members even after appointment.

GRU General Manager Edward Bielarski said he has concerns about what the bill would do and, in a series of emails to city commissioners, seemed opposed to it.

“Because I do have strong concerns regarding its overall impact on GRU as a business and to our customers, I think there needs to be a broad discussion on how the legislation may affect our bottom line, credit rating and ability to continue maintaining [fund transfers] to the city,” he wrote in one email.

Warren said that Gainesville residents can put forward referendums on their own at any time and that a state bill is unnecessary.

“The citizens always have that option,” she said. “If that was the will of the people, 10 percent of the voting population could’ve done a referendum petition to bring that to the community from the community.”

Though residents might be hesitant toward the commission having authority over GRU because of the decisions of past commissioners, the current commission is taking proactive steps toward improving the utility, leading to lower rates, Warren said.

Since Bielarski was named GRU general manager in June 2015, rates have dropped from being the highest in the state to the third-highest.

“At a time when we have taken great strides to decreasing electric rates and continue to manage the GREC [biomass] contract, I believe GRU, the city and its citizens and customers need to see that strong utility management is the answer, not a separate, awkward, organizational, unmanageable governance model,” Bielarski wrote in an email to city commissioners and the current Utility Advisory Board.

The Utility Advisory Board

On Nov. 19, 2015, the City Commission created the Utility Advisory Board “to assist with governance of the City’s electric, gas, telecommunications, water and wastewater utilities.”

Hayes-Santos has said the board does its job well in advising the commission.

“I think that’s really what the UAB should focus on: really taking a deeper dive into the budget, looking into policy issues and helping to guide the City Commission when it comes to lowering rates [and] providing better energy efficiency for residents,” Hayes-Santos said.

Bielarski said he also favors keeping the Utility Advisory Board the way it is.

“GRU is operating under a strong advisory group, which has added value to the organization,” he wrote in the email to the City Commission and board.

But Chase has a different view of the current board — something he said he voted in favor of in 2015 because it was the only option he had.

“It was done for one reason only, which was to try to appease Representative Perry at the time to pull his bill,” Chase said. “We gave some lip service and said, ‘Hey, we’ll put this citizens Utility Advisory Board together, and that should do it for you.’”

Chase said he’s critical of the board now because he sees it as “nothing more than a little reviewing body that sets no policy and makes no decisions.”

Bill Peebles, a lobbyist for the city of Gainesville, said that he has been directed to oppose the bill as he had in previous sessions. To do this, he talks with members of committees.

Hayes-Santos and Warren have also appeared at the state Legislature to voice their concerns.

If it does end up making it to Scott’s desk, it’s unclear of whether he’ll sign it.

“Governor Scott will review any legislation that makes it to his desk,” Scott spokeswoman Kerri Wyland wrote in an email.

But because the language that Scott opposed in 2016 has been removed, Clemons said he is confident that the bill will make it through this session and that the referendum will be on the March 2018 ballot in Gainesville.

“I would fully expect Governor Scott to sign this bill into law and allow a referendum inside the city of Gainesville for the GRU governance,” he said.

If the referendum does make it to the polls, Hayes-Santos and Warren said they would inform their constituents about their concerns.

“If this bill does pass,” Hayes-Santos said, “I think it’s incredibly important for the citizens of Gainesville to have information [about the] unintended consequences this bill could have and the detrimental costs for the city.”

Clemons, meanwhile, said he would stay out of the local vote and is simply awaiting it to be placed on the ballot.

“I look forward to having this solved and resolved at the earliest election,” he said, “so that we can move onto other types of issues that would benefit the residents of the city of Gainesville.”

The bill now sits in the Government Accountability Committee in the Florida House and is set to come up for a vote there today. If approved, it would then go before the House for a vote.

Turner F. Street is a reporter for WUFT and can be reached at turners@ufl.edu or 904-382-9272.
@@TurnerStreet
Previous At Alachua County Ranch, Exotic Animals Give Couple Purpose
Next April 6, 2017: Morning News In 90