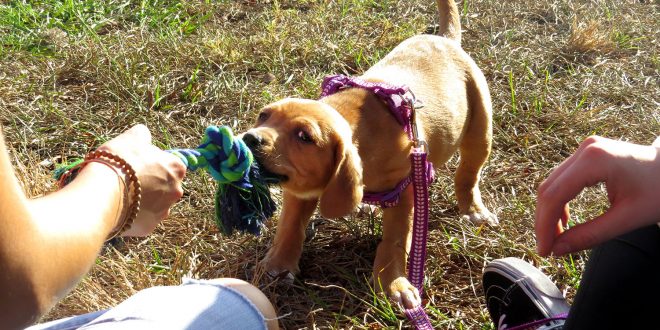 Bella, a 2-month-old therapy dog in training, in December. The Florida Senate on Thursday gave the thumbs-up to allow such dogs in court for children testifying in abuse, abandonment and neglect cases, sending the bill to Gov. Rick Scott's desk. (File/WUFT News)

TALLAHASSEE — Children testifying in court in abuse, abandonment and neglect cases would be allowed the help of therapy animals under a bill passed by the Florida House.

The bill passed unanimously Thursday and expands a law that already allows therapy animals for victims testifying in sexual-offense cases.

A legislative analysis of the bill says that research has shown animals reduce stress in children, and three Florida district courts that have allowed them have reported positive results.

A similar bill in the Senate is ready for a full chamber vote.

The Associated Press is a wire service to which WUFT News subscribes.
Previous Gainesville Towing Company Wants To Drop ‘Spotters’ But Can’t
Next ‘Go For It’: Vera Bradley Co-Founder Encourages Entrepreneurial Women At UF