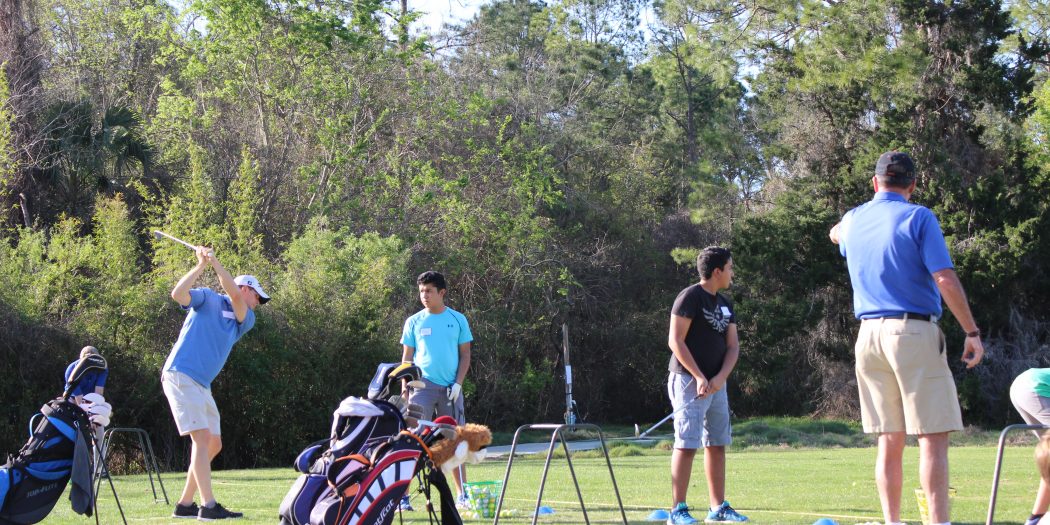 Danny, 15, and Gabe, 13, work with volunteer coaches from The Gator Junior Golf Association to advance their skills. (Katherine Campione/WUFT News)

Gator Junior Golf Association Gets Young Golfers Up To Par

Ten-year-old Kara Rowley steps up to the imaginary plate and is met with the excited screams of her peers.  She sets her feet, steadies her hands and swings. The ball soars.

Kara is playing golf baseball, an activity designed by the Gator Junior Golf Association, to work on her distance and direction.

“[The coaches] take their job seriously to make sure, by the end of the day, we’ve at least learned something about golf,” Kara said.

Throughout practices, the coaches develop a variety of activities to keep kids engaged while they are learning the fundamentals of golf basics.

The Gator Junior Golf Association, started by University of Florida graduate student Sean Warner, began as a satellite extension of The First Tee of Greater Ocala.

Warner, 21, said his goal is to create a stand-alone chapter of The First Tee in Gainesville. Now that he is on their radar, he must prove that Gainesville can support a large nonprofit junior golf program.

“Our mission is to introduce golf to youngsters through our fun-driven golf class format,” he said.

The Gator Junior Golf Association has more than 70 students, from ages 5 to 15, enrolled in its current program. They offer classes at Ironwood Golf Course and West End Golf Club.

So far, the transition has positively impacted the organization, Warner said.

“We transitioned so smoothly that we actually saw substantial increased growth in terms of enrollment, volunteers, and word-of-mouth,” he said.

As the organization continues to try to prove its self-sustaining model is successful, Warner said he has plans to expand the classes offered.

Currently one class, called the instruction level, is offered and takes place at practice facilities at Ironwood and West End.

Reger, who has been a PGA member for 35 years, said he is always interested in growing the game of golf, especially among young people.

“The sport is about values, honesty and respect,” he said. “It’s not just hitting a ball in a hole in the fewest amount of strokes.”

Warner said he will lead the team level of instruction that will organize practices and matches for participants. The program will pair participants with high school and college golfers in an effort to establish mentorship.

Despite these additional classes, Warner said he hopes prices for practices will not increase.

Currently the cost is $100 for the season and a $25 annual fee. The Gator Junior Golf Association offers scholarships to those who are unable to afford these fees. As of March, 28 out the 78 student participants receive scholarships, according to Warner.

The organization partners with the city of Gainesville and local nonprofits, such as Girls’ Place, to make golf accessible to students who wouldn’t otherwise have the opportunity.

Jeff Cardozo, the golf course manager at Ironwood, said it is encouraging to have a local organization dedicated to teaching golf to children of all demographics.

“Hopefully we’ll turn some kids into golfers,” he said.

The organization, while currently unaffiliated with The First Tee, retained the coaches and clients it garnered as The First Tee Gainesville, Warner said.

Sian Hoctor, a third-year biology student at UF and a coach for Gator Junior Golf Association, said she has been involved with The First Tee for close to 7 years and was excited to be involved with the Gainesville extension.

Shortly after she began coaching for them, the transition was made to the Gator Junior Golf Association, she said.

“It’s kind of nice to be starting something new,” the 20-year-old said.

Katherine Campione is a reporter for WUFT News. She can be contacted by emailing krcampione@ufl.edu or 352-392-6397.
@katie_campione
Previous Woman Charged With DUI Manslaughter Of UF Student Denied Bond
Next March 23, 2017: Morning News In 90