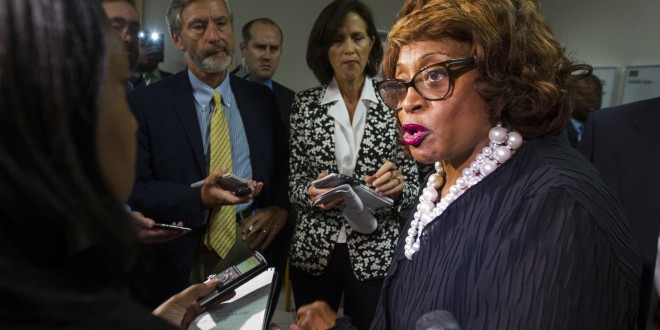 Former Rep. Corrine Brown, D-Fla., talks with media members in 2015. A former chief of staff for Brown, Elias “Ronnie” Simmons, pleaded guilty today to one count of conspiracy to commit mail and wire fraud and one count of theft of government property in relation to a fake scholarship charity. (AP file photo)

A former chief of staff for former Rep. Corrine Brown pleaded guilty to his role in the conspiracy and fraud scheme involving a fake scholarship charity.

Elias “Ronnie” Simmons pleaded guilty today to one count of conspiracy to commit mail and wire fraud and one count of theft of government property, according to a U.S Department of Justice news release.

Simmons admitted that he and Brown, a co-defendant, participated in a fraudulent scheme involving the One Door for Education – Amy Anderson Scholarship Fund.

Contrary to previous statements, Simmons admitted that he, Brown, One Door President Carla Wiley and others used the majority of One Door donations for personal and professional benefit, including tens of thousands of dollars in cash deposits that Simmons made to Brown’s personal bank accounts, the release said.

Simmons admitted to depositing cash into one of Brown’s accounts the same day that Brown wrote a check for a similar amount to pay her taxes.

An outside consulting company of one of Brown’s employees was used to funnel One Door and other funds to Brown and others, Simmons admitted, $200,000 of which was used to pay for lavish events and box tickets to a Beyoncé concert and an NFL game.

According the release, $800,000 in donations were raised for One Door under the pretense that the money would be used for college scholarships, but the charity provided only two scholarships, totaling $1,200.

Simmons also admitted to misusing his position as Brown’s chief of staff to employ a close relative, who received more than $735,000 as a government salary between 2001 and early 2016 without performing any known work, the release said. Simmons took $80,000 of that salary for his own benefit.

Simmons and Brown were first indicted in July 2016. Brown’s trial is set for April 24. No sentencing hearing has been set for Simmons.