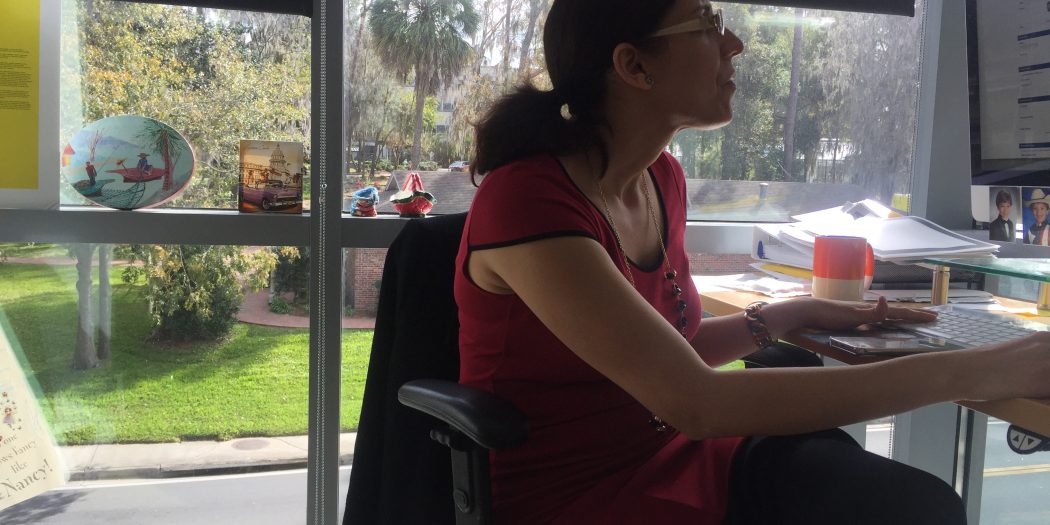 Yenisel Cruz-Almeida speaks of her overseas journey from Cuba to the United States. Cuban memorabilia decorate her office in the background to honor her heritage. (Gabriella Nuñez/WUFT News)

That’s what 14-year-old Yenisel Cruz-Almeida wanted to do when her father Alberto Cruz decided to leave Cuba in search of freedom and opportunity.

However, building a makeshift boat seemed safer and much more feasible. And for three days, her family traveled the 90-mile stretch of ocean between Florida and Cuba.

“Imagine being on a roller coaster and knowing that you’re not trapped in,” Cruz-Almeida said about her first night at sea.

It wasn’t until she saw empty Coke and Sprite bottles in the water that she knew land was near. A boat named “Opportunity” found her and her family, and it became a symbol for her life in the United States.

“Now they won’t have a choice … now I don’t think it will leave a lot of options for Cubans,” the clinical neuroscientist said.

This is in reference to Obama’s repeal of the “wet foot, dry foot” policy on Jan. 12. The policy, created in 1995 by former President Bill Clinton, allowed Cubans who reached U.S. land a quick road to residency.

“I have very mixed emotions about it,” Cruz-Almeida said. “I don’t feel like there’s a lot of change justified in Cuba … for them all of a sudden to take this away.”

The repeal has shaken up other Cubans and Cuban-Americans in Gainesville.

Jocelyn Aviles, Gainesville resident of five years, was born in the U.S., but her father was born in Cuba and made his way to the U.S. by plane, with a visa in 1988, in his early twenties.

“Now your problem is my problem,” 22-year-old Nicaraguan-Cuban American said about her Cuban father’s confusing immigration status. “I thought that I may have to uproot my life in Gainesville to help my father with what he created and worked for in Miami.”

Aviles’ father owns three self-started businesses in Miami. She said she wasn’t sure how this repeal would affect him and how further changes in policy would affect their lives.

“I understand why they did it, Cubans would come to Miami in the thousands,” Aviles said. “This just means that Cubans can’t run away anymore, they have to come up with a solution for their country.”

Though Aviles recognizes Obama’s repeal could do some good, she still believes that Cuba may not progress rapidly with so much change.

The suddenness of the policy has also affected different realms of the immigration process between the U.S. and Cuba.

“My grandparents actually just arrived this past Friday, the day right after the immigration policy changed,” 19-year-old recent Gainesville resident, Adrian Cruz said. Though he was born in Colombia, Cruz lived in Cuba until the age of 3 (when he gained U.S. residency through “wet foot, dry foot”) and has Cuban family, who now live in Miami.

Cruz and his family were terrified at how the change would affect his grandparents’ arrival. Though they had visas, Cruz’ family wasn’t sure if his grandparents would make it to the U.S.

“They spent 12 hours for a 45 minute trip between both airports just because of the whole tension that happened with immigration,” he said.

Cruz believes the tension won’t be over soon and that the repeal has caused more harm than good for his grandparents.

“They don’t know what’s going to happen with the five-year [visa] policy next,” he said. “They’re considering staying here because of the resources and they’re getting there in age. They don’t have their sons or daughter because they’re all here.”

To Cruz, the “wet foot, dry foot” policy meant opportunity for Cubans. The repeal takes some of that away.

“I feel that it limits everyone’s opportunities and that we’re not going to move forward from this,” he said. “Cuba is going to have the potential to go back to what it was — the lack of resources, the lack of communication with the United States.”

“The stories before are appreciated, glorified,” he said. Cruz added that the Cuban immigration story will now be oversimplified and “looked down upon.”

The repeal leaves Cubans with one less way to receive expedited residency.

Cubans will arrive by plane, most likely with visas while other Hispanics cross dangerous borders illegally, he said. The Cuban immigrant story will have more safety but lose merit.

“I feel that now we don’t have that. We’re all going to be equal,” he said alluding to the benefit of the Cuban Adjustment Act.

The CAA is a 1966 federal law and precursor to “wet foot, dry foot.” It grants residency to Cuban citizens that live in the U.S. for one year — a privilege that is not granted to other Hispanic immigrants.

To him, the repeal may be a scary sign to the future immigration laws and to the future of Cuba. Yet, Cruz still believes in the fervor and strength of the Cuban people.

“Even then Cuba still stands a chance,” he said. “It motivates you to make a big change ‘y seguir pa’lante’ (and to keep moving forward).”

Gabriella is a reporter at WUFT news and can be reached at 21gabnun@gmail.com or 305-299-1075.
Previous Alachua County Schools OKs $3.25M Software Purchase
Next North Central Florida YMCA Pushes To Raise $1.5 Million In Order To Avoid Closure