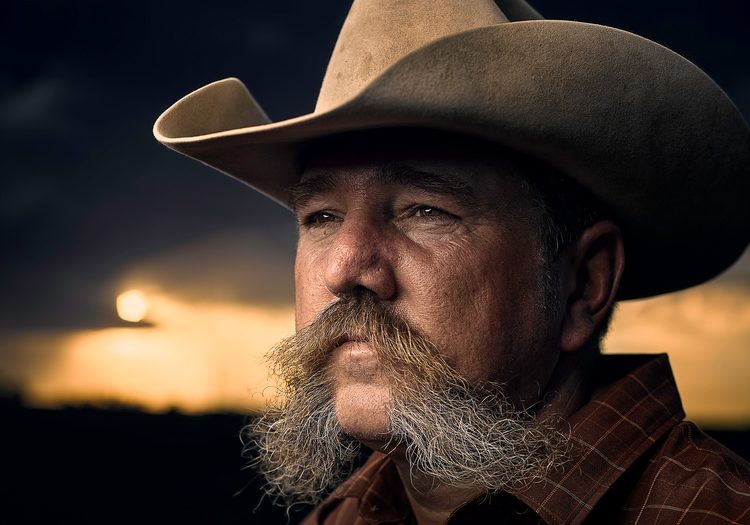 Rancher in Western Kansas. Photographed by Scott Stebner for his Kansas Farmer documentary.

He was interviewed by Tiffany Rogers, a University of Florida PhD student in agricultural communication who also co-owns the Gainesville video production company Paradigm Productions.

TR: What is your connection to the agricultural industry?

SS: “I grew up a surf bum in Southern California. That’s not the way most would expect me to begin this answer, but it’s true. I was born in Long Beach but grew up in northern San Diego. We had four acres, so of course we bought some sheep and became active 4-H members. My county fair was…large. We averaged over two million people in attendance every year. With that many people walking through the lamb, cattle, and pig barns, you learn from a very young age that you have to be proactive in educating the public and always be ready to answer their questions…no matter how crazy they may seem. I went to school to become a veterinarian…until physics and chemistry happened. I soon changed my major to agricultural education and spent seven years as a secondary agriculture teacher/FFA [Future Farmers of America] advisor. Most of this time was spent in predominantly urban areas teaching kids who had zero connection to agriculture. I loved it.”

TR: How did your passion for photography develop?

SS: My uncle, Carl Mydans,— was one of the first FSA [Farm Security Administration] photographers hired under Roy Stryker (the famous head of the Farm Security Administration’s Information Division during the Great Depression). So, he photographed a ton of agriculture. From there he went on to be one of the first five photographers for what was then called Time Project X. We know it as LIFE Magazine. I grew up listening to his stories so I guess it was just a natural fit. However, I originally wanted to be a writer. I spent tons of time wanting to be a fashion photographer, wedding photographer, and any other type of photographer under the sun. But, I got burned out. I didn’t like my work. When I moved to Kansas I wanted to get back to my roots so I looked at what I was truly passionate about: Agriculture. So, I spent two years photographing the farmers and ranchers around me. I found my passion again. I love communicating about the heart and soul behind agriculture through an image.

TR: You’ve described your academic experience in agricultural communications as having a “profound impact” on your images. Can you explain?

SS: My images are not just pretty pictures. They are theory in practice. I draw upon theoretical concepts, the body of literature, and practical experience to create emotionally activating and cognitively stimulating photographs that effectively communicate agricultural principles and issues.

I actually draw upon a ton of transparency research. Some of the early research by Dr. [Joy] Rumble at the University of Florida on perceptions of images in agriculture, color theory, ELM [Elaboration Likelihood Model], and quite a few other theories come to mind.

TR: What ultimately drives you to do what you do?

SS: It makes me happy. I know that’s a shallow answer, but really that’s the best one I can give. It makes me happy that I can take an image that empowers a community and tries to bridge that green divide.

TR: What do you hope your viewer sees when they encounter one of your creations?