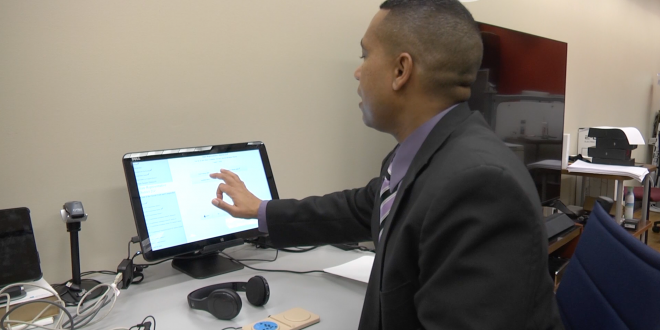 Juan Gilbert, chair of the University of Florida's Computer and Information Science and Engineering Department, demonstrates how to use the Prime III voting machine, which he developed. Prime III assists the disabled with voting and was used for the first time in New Hampshire for this month's election. (Alexa Lorenzo/WUFT News)

A voting machine developed at the University of Florida helped voters with different disabilities to cast their ballots in this month’s elections.

Prime III, or the Premier Third Generation Voting System, was used statewide in New Hampshire — the first state to certify use of the machine — on Election Day. Other states have a separate voting machines made specifically for people with disabilities, but with Prime III, all of New Hampshire’s are able to accommodate any voter.

With Prime III, a blind person, for example, votes by putting on headphones, and following audio prompts for the various races, they vocalize their choices. Someone without arms or someone who otherwise can’t write does the same.

Juan Gilbert, chair of UF’s Computer and Information Science and Engineering Department, came up with the idea for the voting technology after Congress passed the Help America Vote Act in 2002. The act required every voting precinct to have one voting machine for people with disabilities. But Gilbert saw the new legislation and didn’t think of it as the best solution. “We saw that, and we thought that could be a problem because you’re creating a separate-but-equal connotation in voting. And we were right.”

He said he then got to work on Prime III and has been developing the technology for almost a decade. Along with its audio capabilities, it’s touch-screen enabled and includes written instructions prior to voting for a deaf person, for example, who can’t receive them verbally from a poll worker.

“Our purpose was to create one machine, universally designed that everyone can vote on independent of your ability or disability,” Gilbert said.

His next step is to get Prime III certified in California, and after that, he plans to target nationwide implementation.

Brianna Posadas, a first-year Ph.D. student at UF in human-centered computing who has worked on Prime III, said the project has been improved by its researchers talking with the Alachua County Council of the Blind. This allowed the team to understand the different situations a person with disabilities faces when she or he votes.

“It’s not working for them,” Posadas said of many of the nation’s current voting methods. “It’s not a working solution, and I think Prime III is and it can be a solution that works for everyone.”

David Linn, a rehabilitation specialist at the Florida Division of Blind Services in Tallahassee, has been blind since he was 10. He said he no longer goes to the polls to vote using the separate machine for the disabled because he instead fills out an absentee ballot with the help of a family member.

“For me, it’s just easier to do it in the comfort of my home,” he said.

Nonetheless, Linn said, Prime III represents a step forward for people with disabilities.
“It’s always a good feeling,” he said, “to sort of be able to do what everyone else is doing without any real special attention being drawn to myself or to another person with a disability.”
Alachua County Election Florida University of Florida voting 2016-11-16
Alexa Lorenzo
Share

Alexa is a reporter for WUFT News and can be contacted by calling 352-392-6397 or emailing news@wuft.org.
Previous Train Collision In Marion County Results in Spilled Fuel And Minor Injuries
Next At UF Law School, LGBT Community Celebrated, Pulse Remembered