Concealed weapons licenses have spiked since Barack Obama was elected president, and the growth has been fairly consistent across the state.

Florida license holders have increased at 25 times the rate of population growth since 2008. An analysis of growth in each county shows no particular pattern with income, education, racial diversity or population.

The one factor that had some influence on the growth was voting preference. Counties where Republican Mitt Romney had substantially more votes in 2012 than Obama did had a stronger growth in concealed weapons licenses.

The county data were obtained through an public record request to the Florida Department of Agriculture and Consumer Services, the state agency that manages concealed weapons licenses. The department supplied the data from 2001 through 2015. 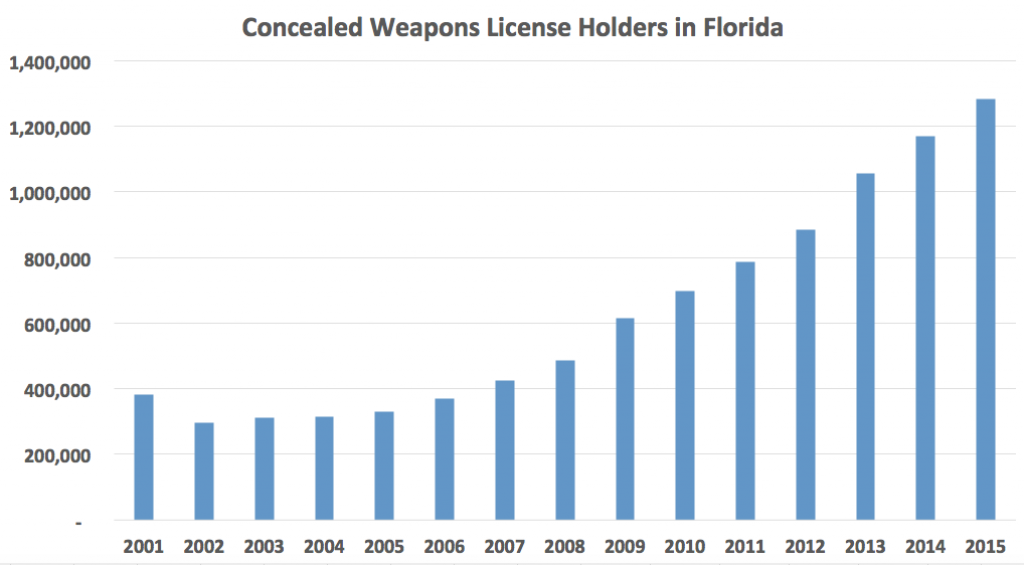 Figures for license holders for each county were compared to census data. The analysis examined county data for median income, the portion with at least a high school diploma, the percentage below the poverty line, and the portion of each county that was white.

In all cases, statistical tests found no patterns between growth in concealed weapons licenses and differences in the demographic makeup of the county.

In other words, distinctions in race, education and income were not associated with differences in how fast licenses rose in each county.

Florida ranked 11th in the country for number of concealed weapons permits per capita, according to a 2012 analysis by the Government Accountability Office.

A 2014 study by the Crime Prevention Research Center concluded that concealed weapons licenses had grown by 130 percent nationally between 2007 and 2013. About 5 percent of U.S. adults had a concealed weapons permit in 2013.

“Definitely it has increased in the long term, but there’s also a short-term increase when there’s stuff on the news like the Brussels attacks and Paris attacks,” he said.

Yet, he said, people mainly come in to train to use a gun for personal protection. “It’s always been wide across-the-board demographic-wise,” he said.

Tom Smith, senior fellow NORC at the University of Chicago, an independent social research organization, attributed a national increase in concealed weapons licenses to states making it easier for people to apply.

In Florida, the Legislature this spring passed a bill signed into law by Gov. Rick Scott that lowers the fees for concealed weapons permits.

Jessica is a reporter who can be contacted by calling 352-392-6397 or emailing news@wuft.org.
Previous Gainesville To Get New Assisted-Living Center
Next Which Politicians Benefit Most When Floridians Give Outside the State?