Holiday Season Increases Chance For Pets To Be Adopted 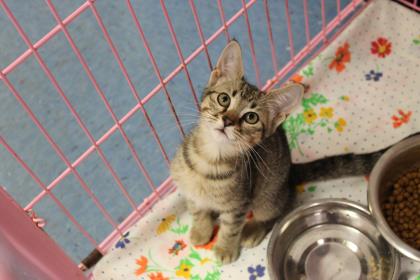 The holiday is full of gift-giving opportunities. Adults and children alike often wish to find a furry friend with a bow on its collar under the tree.

Chrissy Sedgley, the Director of Shelter Operations at the Alachua County Humane Society, said that shelters frequently see an increase in adoptions throughout the month of December.

Many shelters take advantage of the holiday season by holding special holiday promotions, having holiday-themed fundraisers and even naming their pets after favorite holiday characters.

“We like to see the whole family and how they interact with the animal,” she said.

Sedgley said she’s heard a lot of misinformation around the idea that giving animals as holidays gifts is a bad idea.

“We’ve actually seen them be very successful,” she said. “We haven’t found that to be true.”

According to a 2013 study conducted by the The American Society for the Prevention of Cruelty to Animals, about 60 percent of people surveyed who were okay with a pet they received as a surprise gift, felt that it increased their love for the animal.

Sedgley said that it’s important for parents to teach children how to interact with new animals and pay attention to the animal’s body language.

“We usually know how the animals are going to interact based on their behavior in foster homes,” she said.

Sedgley had a personal experience with receiving an animal as a gift, too.

“When I was three years old, I got a cat under the tree,” she said “I had him for 15 years. His name was Binkster.”

She said many other shelter employees had similar experiences with giving and receiving pets for the holidays.

Dr. Brian DiGangi, a professor of shelter medicine at the University of Florida, said there are many benefits to giving pets as holiday gifts.

“The holiday season is often an excellent time to adopt a new pet,” he said. “Many people are off from work and have time to spend getting to know their new pet and helping him or her acclimate to their new home.”

The best outcome is that the animal, particularly shelter pets, finds a good and lifelong home, DiGangi said.

“The main drawback to gifting a pet is the potential that the new owner may not actually be prepared or willing to take on the responsibility of providing appropriate care,” DiGangi said.

Many shelters anecdotally report an increase in animals returned after the holiday season is over. This is likely caused by the increased number of adoptions throughout the holiday season, rather than as a direct result of gifting animals, he said.

DiGangi said that there is some national data that shows the owners who receive a pet as a gift have a stronger bond with those animals than animals adopted for other reasons.

According to the ASPCA study, about 77 percent of people surveyed, who were okay with a pet they received as a surprise gift, kept that pet in their home.

DiGangi said the most important advice is to be sure that the person receiving the pet as a gift is willing and able to provide all the items needed to take care of a pet for its lifetime.

“Food, toys, training classes, veterinary visits can all add up and overwhelm someone who is not prepared,” he said.

Caitlin is a reporter for WUFT News and can be contacted by calling 352-392-6397 or emailing news@wuft.org.
@@FranzCaitlin
Previous SunPass Requires Switch to Newer Transponders by New Year’s
Next UAA Raises Football Ticket Prices, Discusses Changes