The Banana Derby is an event that takes place at the fair every year where monkeys ride on top of dogs and race around a track.

Some residents, however, complained to Alachua County Commissioners about the derby. They questioned whether it was humane to the monkeys.

Kari Bagnall, founder and director of Jungle Friends Primate Sanctuary in Gainesville, Florida, said she was in tears when she first saw the Banana Derby.

“All anyone needs to do is to look into the monkeys’ eyes – it is easy to see the fear in most,” said Bagnall, whose organization provides a place for monkeys to climb trees, swing from ropes, forage in the grass and enjoy the sunshine. “Maybe what hurt my heart the most was seeing the monkeys who had simply given up, lost hope.”

Mark Sexton,  Communication and Legislative Affairs Director for Alachua County,  said the Florida Wildlife Federation looked into the event after the complaints came in and found no reason to take any action against the derby. Yet in spite of the federation’s stance, as well as a lack of evidence as to whether the monkeys are being harmed, Bagnall said she believes the Banana Derby causes psychological damage to the primates and could even impact children who watch the race.

Although there is no evidence to prove so, Bagnall said she feels the Banana Derby causes psychological damage to the monkeys and could even impact the children who watch the race.

“What are our children learning from circus acts in which animals are reduced to this kind of humiliation?” Bagnall said.

Phil Hendricks, one of the Banana Derby workers, said his monkeys aren’t being abused, but are rather doing something the monkeys came up with on their own.

Hendricks said BoBo, one of the monkeys, loved his dog George and would ride on his back. A friend of Hendricks told him to make a show out of it, and the rest is history.

“Monkeys are attracted to dogs just like humans are,” Hendricks said. “I love my monkeys like people love their dogs.”

Hendricks said the Banana Derby is licensed by the Florida Fish and Wildlife Conservation Commission, and he comes back to the Alachua County Fair every year to present his monkeys.

“Do you think the fair would let me come back and families would come watch if this was something barbaric?” Hendricks said.

Currently there are two petitions circulating. The first was to close down the Banana Derby, resulting in a counter-petition to close Jungle Friends.

Kat is a reporter who can be contacted by calling 352-392-6397 or emailing news@wuft.org.
Previous UF Holds International Education Week To Highlight Global Students
Next New Bill Aims To Encourage Boating Safety 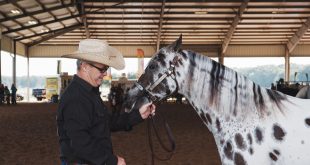