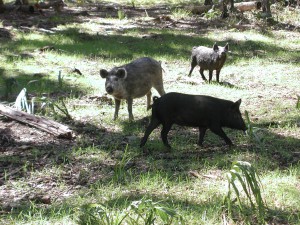 A group of feral pigs walk around in Waccasassa Bay Preserve State Park. The pigs, which inhabit the majority of Florida, are a growing problem nationwide. Photo by Dan Pearson.

Local wildlife services aren’t sure they are getting the money they need to help a nationwide effort to control the feral swine population.

For the first time, the U.S. Department of Agriculture is fighting the invasive species, with $20 million in program funding being disseminated throughout the states.

Duffiney said the Wildlife Services program is planning how to use that money to mitigate the damage caused by feral swine. But with a population as large as Florida’s, that funding comes to less than a dollar per pig.

There is no accurate count of how many feral swine populate Florida, with estimates ranging from 500,000 to one million, Duffiney said. Feral pigs aren’t native to Florida and don’t have many predators, so their populations have boomed.

“Without having a good population estimate, it’s hard to develop goals,” he said. “We want to try and go into areas where we can show dramatic improvement.”

Two state parks in need of such assistance are Paynes Prairie in Micanopy and San Felasco in Gainesville, whose feral swine populations have grown significantly in the past 20 years.

Dan Pearson, the district biologist who helps manage these parks for the Florida Department of Environmental Protection, said evaluating the extent of the damage caused by the pigs in these areas is difficult.

The pigs uproot trees and plants and burrow into the ground. Their wallowing can redirect water sources or create marshes. Pearson compared a herd’s destruction to dragging a rotary tiller across the ground.

Not only are feral swine destructive to the ecosystems they invade, but they also carry diseases harmful to humans and domestic animals.

Thomas Holt, the Florida state veterinarian and director in the Department of Agriculture and Consumer Services’ Division of Animal Industry, said about 20 percent of the feral swine population carries pseudorabies and brucellosis.

Holt said pseudorabies is fatal if a dog contracts it, and brucellosis causes miscarriages and kills young animals, causing undulating fever and flu-like symptoms in humans as well.

“We’re concerned from a disease standpoint,” he said. “They can be a reservoir: They can hold that disease and keep it going because we can’t control the feral swine.”

Tony Young, a Florida Wildlife Commission spokesman, said the FWC recognizes the destructive power of the pigs, and have relaxed restrictions on hunting them. As of two years ago, hunters no longer need a permit to hunt wild hogs, and weapon restrictions have been lifted as well.

“We’re not in the business of eradicating hogs off our property,” he said.

Duffiney said the Wildlife Services program isn’t a regulatory agency. Its 35 field employees around the state primarily go to work when land managers or state parks ask for help.

The program is looking to create a feral swine taskforce with other state agencies like the FWC that will try to develop a solution.

“We’re going to work on some of these areas where hunters don’t have access for one reason or another, and we’re just going to have to see what happens then.”

Sean is a reporter for WUFT News who may be contacted by calling 352-392-6397 or emailing news @wuft.org
Previous April 24, 2014: Morning News in 90
Next Clay County Improves Attendance, Discipline with Classroom Technology

Zero waste is defined for people as living in a way that produces little to no waste.