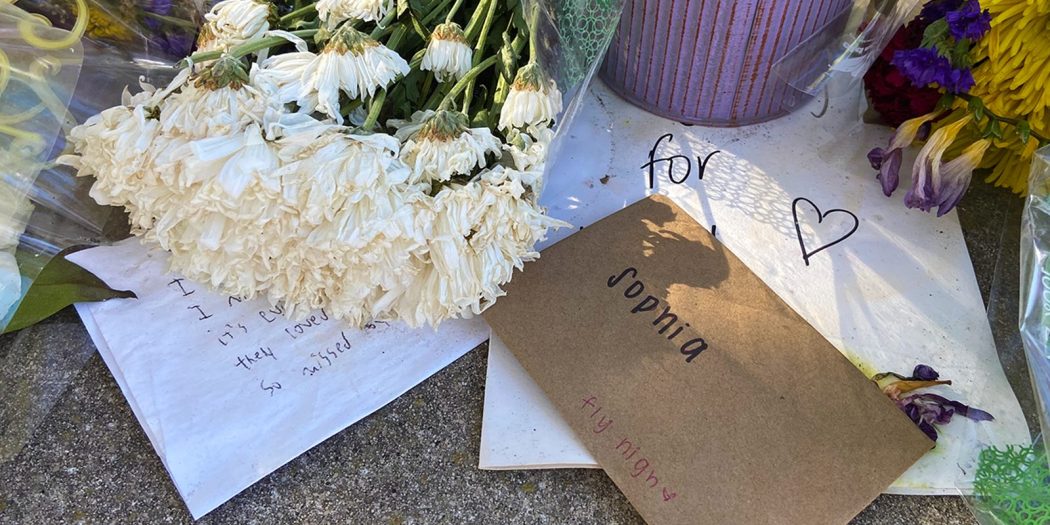 A handwritten note addressed to Sophia Lambert lies at the intersection where she was fatally injured by a skidding car. (Haleigh Donahue/WUFT News)

Gainesville residents are once again concerned about pedestrian safety, after three separate traffic incidents took the lives of three University of Florida students within one year.

On Jan. 27, 2020, Denise Griffiths was struck and killed by a vehicle while using a crosswalk on East University Avenue.

On Dec. 9, 2020, Maggie Paxton was killed in a hit and run while walking on West University Avenue.

On Jan. 16, 2021, Sophia Lambert was killed when a car rammed into her while she stood on the sidewalk at the corner of Northwest 17th Street and West University Avenue.

Many residents have been left to wonder what is being done to enact change on this issue. Transportation advocacy groups within Gainesville, such as Gainesville Citizens for Active Transportation, were some of the first to call for change.

GCAT was founded in 2013. At the time, Gainesville citizens were frustrated with the unwillingness of the Gainesville City Commission and the Alachua County Commission to include bike lanes on roads being repaved, said Chris Furlow, president of GCAT.

“Our vision is that active transportation becomes a safe, viable and attractive option for everybody in the community,” Furlow said.

As part of its response to the recent pedestrian incident involving Lambert, GCAT released a 21-page call to action document. Working closely alongside Gators Against Student Pedestrian Deaths, the two organizations created the #NotOneMore campaign.

The report opens with a simple statement: “The recent pedestrian and bicyclist deaths and injuries are not new and should surprise no one.”

The report highlights actions that can be taken immediately to address pedestrian safety issues. These include more enforcement speed limits, traffic violations, texting laws and DUI infractions by the Gainesville Police Department, the University of Florida Police Department and the Alachua County Sheriff’s Office. The report calls for the immediate installation of speed indicator signs along University Avenue and streets adjacent to UF.

GCAT’s report also details actions that should occur over the course of the next year in collaboration with the Florida Department of Transportation. Among many, these actions include reducing speed limits to 20 mph on specific roads and the addition of speed tables – long, raised bumps in the road to slow cars down – at major intersections along West University Avenue and Southwest 13th Street.

The report proposes a day of remembrance for the victims of the recent traffic incidents and the creation of a memorial.

When asked what he feels is ultimately necessary to improve pedestrian safety in Gainesville, Furlow said major roads surrounding UF, including University Avenue and Southwest 13th Street, need to be redesigned by the state as “complete streets.”

The report notes that currently roads around UF are not considered complete streets. Rather these streets were designed to “move motor vehicles through Gainesville as quickly and efficiently as possible.” A street is deemed a “complete street” only when it is designed for the safety of all road users, including pedestrians, bicyclists and drivers. This would involve the addition of bicycle lanes and the enhancement of sidewalks and crosswalks.

On Feb. 3, UF announced plans to enhance safety on surrounding streets both in the short-term and the long-term. These actions include the installation of lighted message boards indicating vehicle speed and an increase in permanent pedestrian safety signage at major intersections. Long-term, the university is planning two collaborative projects with FDOT beginning as early as May 2021.

To address the issue of “complete streets” highlighted by GCAT, UF proposed a “complete streets” study and safety audit for West University Avenue and Southwest 13th Street. Two shared-use paths for pedestrians and bicyclists will be constructed parallel to these streets as well.

Beyond the #NotOneMore campaign, a collaborative project between the UF Transportation Institute and the City of Gainesville is also in the works to address issues of pedestrian safety at high-risk intersections. The project, “Video Based Machine Learning for Smart Traffic Analysis and Management” is being led by Sanjay Ranka, a professor in the Department of Computer and Information Science and Engineering at UF.

In 2019, Ranka and his team were awarded a $2 million grant from the National Science Foundation’s Smart and Connected Communities Program to fund this project.

“We want to see if there are any preventative measures that we can take,” Ranka said. “We cannot obviously change human behavior.”

Though the technology is still in a testing stage, Ranka hopes that the technology will eventually be used in real-time to predict and alert both drivers and pedestrians about potential traffic accidents at intersections.

This project and its goals align with Gainesville’s Vision Zero Initiative, adopted by the city in 2018, which seeks to reduce traffic fatalities to zero.

Working alongside the UF Police Department, Gator STEP aims to increase high visibility traffic enforcement along major roadways that surround UF. Since its initiation, Gainesville Police Department has already begun to increase the number of officers on patrol, both on foot and in vehicles, on roads including West University Avenue, Southwest Archer Road, Southwest 34th Street and Southwest 13thStreet.

“Essentially this program is a way for GPD to be proactive and try to educate and remind both students and citizens of Gainesville about pedestrian and motor laws,” said Graham Glover, public information officer for the police department.

According to a Gainesville Police Department press release, the department will also focus efforts on conducting crash analyses on specific areas on University Avenue to identify the types of crashes that occur there. This analysis can be used to identify preventative measures to be taken in the future.

“There is no one solution or overnight fix,” Glover said. “This is a good first step, but we will continue to keep moving forward.”