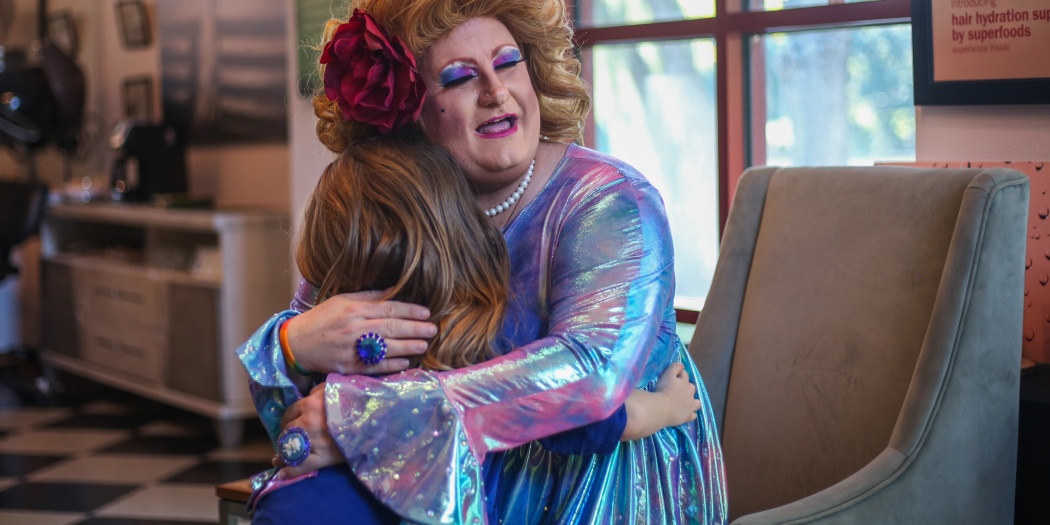 It smells like shampoo and soft perfume as the kids and their parents walk into the local beauty salon where Momma Ashley Rose works during the week. On the second Sunday of the month, Momma greets families by the door. Toddlers teeter toward her with their arms stretched up for a hug.

The families didn’t come for haircuts. They came for a story.

One recent afternoon, Momma read “My Princess Boy,” a book about a little boy who is teased for wearing dresses and a tiara. She sat next to her bubblegum pink sidekick, a nonbinary puppet named Bubble. For more than six months, the duo has read to audiences ranging from a dozen to 50.

Storytime for Momma is in Lakeland, part of largely rural Polk County, immediately east of Tampa, in the center of the Florida Peninsula. Although Momma’s adopted city here leans blue, she is surrounded by a sea of social conservative values and political red. President Donald Trump won the county over Hillary Clinton in 2016, and Republicans have earned a majority of Polk County voters in every federal or state race in the last two elections.

There are other drag queens across Florida and elsewhere in the United States who read stories for children, too. But they do so in major urban centers – such as Miami or Orlando – where LGBTQ populations are generally accepted and where there are resources for parents of children who are coming out, not usually in places like Polk County.

Momma is rare: a 100% family-friendly drag queen. Although her storytimes are always age-appropriate, the spectacle of a drag queen reading children’s books may be hard to swallow for those who believe exposing kids to people in the LGBTQ  community is harmful.

An hour west, in St. Petersburg, among Florida’s most LGBTQ-friendly cities, a cafe’s monthly drag queen story hour has attracted protesters for months.

In August 2019, a Christian “mommy” blogger in Ohio, Elizabeth Johnston, urged her 700,000 supporters to bombard the cafe with phone calls condemning the story hour, according to news reports at the time. Protesters, who argued that drag queen storytimes are harmful to children, clutched Bibles outside while counter-protesters shielded families attending the event. Johnston did not immediately return email messages to her personal account or her website.

In Lakeland, there have been no protests so far. There is a plan in case, however. Teen volunteers are prepared to block troublemakers with giant angel wings worn at Pride events.

“I want my kids safe,” Momma said. “I want the parents to know that their kids are safe.”

‘Outside the big city’

There are few groups or programs for LGBTQ youth, especially in rural areas and smaller cities, said Jennifer Foster, founder and executive director of One Orlando Alliance, a coalition of Central Florida LGBTQ organizations.

“She’s taking it to places outside of the big city, outside of Orlando. Our youth are coming out younger and younger, and parents and young people are looking for resources,” Foster said.

Rose Dynasty also hosts youth meetings for LGBTQ teenagers to hang out together, first in Lakeland and now two hours north in Gainesville.

Momma was hosting family-friendly drag events and fostering relationships with local families, even before Florida approved her foundation’s business license in 2018. The fourth pageant required drag queen contestants to raise money for charities.

Children also attend the pageant, and its success surprised supporters. Even Momma.

“It’s so taboo for so many people up until recently — children and drag, it just didn’t seem like it went well together,” Momma said.

Patricia Uiterwyk, owner of Venue Salon, where Momma also works as a hairdresser, said she was happy to provide space for storytime. Even her 9-year-old son, Sid, would rather listen to Momma’s stories than fish or watch movies, Uiterwyk said.

Momma’s storytime helps Sid, who has LGBTQ family members, learn to stand up for bullied kids at school without feeling like a tattletale, Uiterwyk said. Sid respectfully declined an interview as he flicked open a hand fan and walked away.

Callie Cameron, 45, recently moved her family from northeast Texas to Kissimmee to raise her transgender daughter and multiracial family. She said the town where they lived was “the worst place in the world you could be if you’re different.”

Once in Florida, Cameron set out to look for local resources for her child. She met Momma at Polk Pride, Lakeland’s annual festival celebrating LGBTQ history, and asked if she knew of a local drag story hour event. The two exchanged numbers to make storytime happen.

Cameron brings her grandchildren to drag storytime to learn about diversity and inclusion.

“Polk County is still not where it should be,” she said. “I think that Momma is a trailblazer as far as LGBT youth. I don’t think people realize how important events like this are for children.”

Children especially gravitate toward Bubble, the Sesame Street-like, gender-neutral monster created by Rose Dynasty board member Dave Ryan of Kissimmee. Bubble doesn’t feel like a boy or a girl, said Ryan, 35, who also performs in drag. Bubble is just Bubble, he said.

Ryan enjoys teaching children how to respect people who are nonbinary.

“Prejudice is taught, so I can teach them the other way, too,” he said.

Before there was Momma, a boy named Jason DeShazo was born into a religious family in Plant City in Hillsborough County. He spent most of his childhood in Okeechobee, a dairy and fishing town of 5,700 just north of the lake.

DeShazo, now 41 and known to the children as Momma, jokes that he got his start in drag by performing as a mime and clown with his Protestant church’s youth group. He moved often — mostly living with his father in cities across the state — but church always stayed with him. Even to this day.

His parents learned he was gay in his early teens. He declined to say how.

Around age 16, he said he chose on his own to seek conversion therapy.

That’s the practice of aiming to change a person’s sexual orientation or gender identity. A 2018 study by the Williams Institute at the UCLA School of Law reported that 698,000 LGBTQ adults nationwide received conversion therapy. The treatment has been widely debunked, with the American Academy of Pediatrics claiming it is not effective and may cause depression and distress.

DeShazo agrees, but stressed that his parents were not abusive. As an adult, DeShazo said he’s still learning how to share that part of his story.

“That’s all we knew,” he said. “We knew that our religion taught that I wasn’t OK being gay, and I needed to be fixed.”

His time in conversion therapy ended in 1999, when he moved to Tampa to help his grandmother after his grandfather died. This is when his coming out journey truly began, he said.

Momma’s first time in drag was anticlimactic; she unintentionally looked like Winona Ryder in “Edward Scissorhands.” For years after, she’d dabble in drag while living in different cities in and out of Florida.

When Momma and her spouse moved back to Central Florida after living in Georgia and California, Momma — by then a pastor at LGBTQ churches — used drag to fundraise. A variety show for children affected by HIV raised more than $600. A gospel dinner show netted the same amount for another charity.

She struggled to combine drag with her Christian faith and wholesome message — her motto was spreading God’s love in wigs and heels. “The second you start talking religion to people, it just doesn’t work,” she said.

Over time, she balked increasingly at traditional drag queen performances, lip syncing Top 20 songs. She told a fellow queen, Summer Holiday: “I don’t fit in. I just don’t know what I’m supposed to do.”

“Momma, you have something that no one else does,” Summer said.

Momma eventually leaned into what makes her unique: a passion for fundraising, a love of children and her background as a pastor. In January 2017, she held the first Miss Rose Dynasty Pageant in an empty West Palm Beach warehouse. Momma and her husband built the stage and curtains the night before.

“I knew where I wanted to go with it, but we were embarking on something that ended up being amazing,” Momma said.

Before moving from Lake County to two hours north to Gainesville, Kaycee Hannen, 45, recalled looking for local support groups for her 19-year-old transgender son, Keaton, and meet families similar to theirs. A mutual friend connected her to Momma and her teen social group in Lakeland. Keaton Hannen said the group helped him to gain confidence as he transitions. He now considers himself an extrovert.

In November, Kaycee Hannen hosted the first Rose Dynasty teen group in Gainesville, open to ages 13 to 20, in her home. Six families came with about eight teens.

“The golden rule in this group is to be kind,” Keaton Hannen said.

Momma has plans to grow Rose Dynasty further, opening a center out of which to run the nonprofit and provide resources for families. Until then, Lakeland’s LGBTQ teenagers will continue meeting in a salon. Children from across Central Florida will huddle on a carpet to listen to Disney stories while their parents sit on salon chairs. Teenagers will gather at the Hannen household to learn acceptance and confidence.

For Ben Edwards, a 28-year-old bartender, going to Momma’s February storytime with his family was worth missing work. Ben and his wife Kristen, 28, drove from Tampa to Lakeland with their 5-year-old, Ember, and 4-month-old, Ozzy, for storytime.

Ember likes to change the pronouns they use, Kristen Edwards said. Sometimes, Ember goes by a completely different name, Clover.

Ember may one day identify as LGBTQ, but for now, Kristen Edwards said she wants her child to feel accepted no matter who they are and be around other families and children who feel the same way.

As Ben Edwards rocked Ozzy in his arms, Ember grabbed an orange and took their seat right in front of Momma. The book of the day was “Morris Micklewhite and the Tangerine Dress,” about a boy named Morris who loves wearing a tangerine dress.

On Monday, a girl tried to rip Morris’ dress off, Momma read. On Tuesday, a group of boys wouldn’t let Morris play in their pretend spaceship unless he took off the dress. Momma read: “They said, ‘Astronauts don’t wear dresses.’”

“But, astronauts can wear anything!” Ember said, exasperated.

“Right? We know that,” Momma replied. “Astronauts totally can wear anything.”

This story was produced by Fresh Take Florida, a news service of the University of Florida College of Journalism and Communications. The reporter can be reached at arosa@freshtakeflorida.com