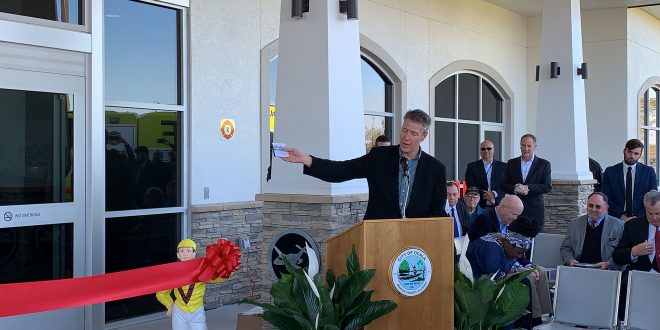 President and CEO of the Ocala/Marion County Chamber and Economic Partnership Kevin Sheilley speaks before the ribbon cutting on Friday. (Dylan O'Shea/WUFT News)

After 13 months of construction, stakeholders in the town’s lone landing strip celebrated on Friday the opening of its new general aviation terminal. They say it will help enhance the private flight experience for private pilots and guests.

Plans for the airport’s latest and greatest attraction were started in 2015 between airport management and Sheltair, a private company that provides fixed-base operators, hangers, aviation-related construction and more. The two parties agreed to a 30-year lease as a part of the deal.

Kyle VanAtta, Sheltair’s fixed-base operator manager at the airport, said the purpose of the $7.5 million project with Sheltair and the Florida Department of Transportation is to serve the local community. He said he’s not worried about other airports.

“In regards to affecting the Gainesville area and any other surrounding areas, we’re not really competing,” he said. “This is just something to impact the Ocala area.”

The new structure’s presence is an impact in itself for Marion County natives. VanAtta said the building will bring the airport and Sheltair under one roof, which is rare for a general aviation terminal.

Rental car companies Enterprise Rent-a-Car, Hertz and National, along with a pending food provider, will also be held in its 17,500 square feet of space.

Kevin Sheilley, president and chief executive of the Ocala/Marion County Chamber and Economic Partnership, said the fresh look and amenities will be a draw to visitors.

“We’re celebrating this great new terminal facility to give us a great front door to our community,” he said.

He said another appealing aspect of the enhancement is residents won’t have to travel as far to go to a general aviation terminal anymore.

Robert Allman lives in Marion County and said he’s happy he won’t have to travel to Gainesville or Orlando as much to hit the skies.

“My brother-in-law has a plane here, and we fly out with him frequently,” the 83-year-old Summerfield resident said. “He has a jet here, so that’s one of the reasons that I’ve been here on multiple occasions.”

Allman said he would prefer not to fly out of other airports in Florida if he didn’t have to. Gainesville Regional Airport is about 50 minutes away from Ocala. Orlando International is even more of a hike at around one hour and 30 minutes.

Allman said commercial flights out of Ocala would be the real game-changer, however.

“Well, unfortunately, you don’t have the commercial flights from here,” he said. “I’d rather fly out of here. If I’m not going private, then I have to go to Orlando.”

Sheilley said adding commercial services out of the airport likely isn’t too far off into the future. He said Ocala’s continuously growing population will create a larger demand for it.

“I think at some point, the tipping point will occur,” he said. “We will see commercial service of some sort arrive here.”

Until that tipping point comes, the airport will continue to just serve private aviators in its partnership with Sheltair.

Sheilley said the airport stays plenty busy with its current arrangement, handling about 80,000 arrivals and departures on its runways, and continuing Ocala’s history of over 80 years of private flight.

Dylan is a reporter for WUFT News who can be reached by calling 352-392-6397 or emailing news@wuft.org.
Previous Breaking Ground
Next Gainesville Votes 2020: City Commission District 2 Guide