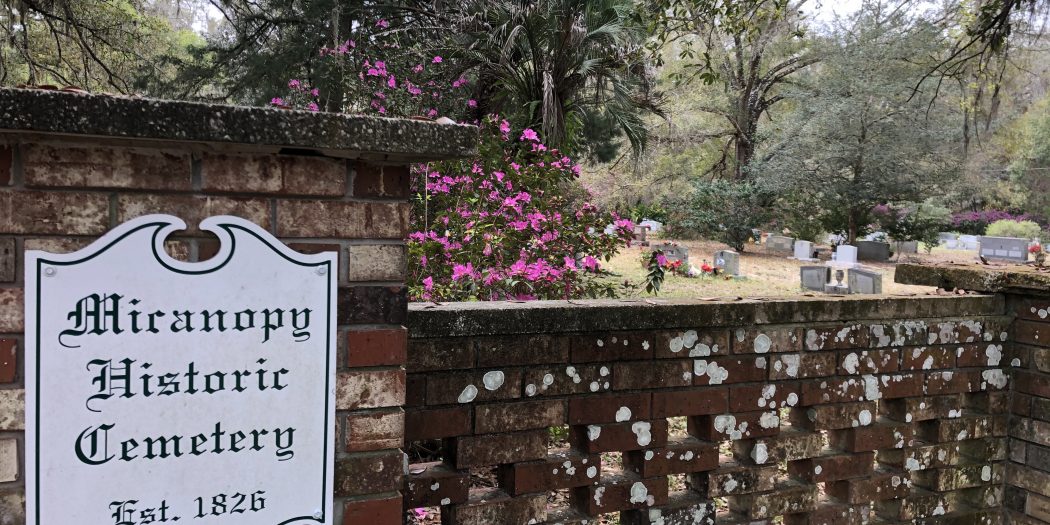 The Micanopy Historic Cemetery contains over 2,000 burial sites from nearly 200 years of the town's history. It is now running out of room for new graves.

As Micanopy’s Cemetery Runs Out Of Space, Seminole Battleground May Prevent Expansion

Dori Emerson Lloyd cannot imagine not being buried next to her parents.

Her family has been buried in the Micanopy Historic Cemetery for centuries, but it’s running out of space.

The Micanopy Historic Cemetery Association proposed plans to expand the 200-year-old cemetery into the adjacent lot, which is comprised of three plots of land owned by the Town of Micanopy. However, the plan is facing pushback from some community leaders because the 4.5-acre expansion would mean tampering with historic land where the Battle of Welika Pond took place in 1836.

Talks about expanding the historic cemetery began about three years ago when the number of usable lots was less than 30 spaces, said Claudia Larsen, president of the Micanopy Historical Cemetery Association.

As the only graveyard in town, the cemetery contains over 2,000 burial sites from nearly 200 years of Micanopy history. Over 100 veterans — some dating back to the Civil War — are buried within this cemetery. Every Veteran’s Day and Memorial Day, townspeople visit the gravesites leaving behind flags on veteran markers.

“Expanding on the adjacent town property would service future burials for the next 100 years at least,” Larsen said.

The cemetery will run out of space for new burials in the next few years and the cemetery association is planning ahead to expand to adjacent land, said Chris Monaco, president of the Micanopy Trust for Historic Forts & Battlefields.

Others have concerns about moving into the adjacent property because it’s where the Battle of Welika Pond took place on July 19, 1836. It was a part of the Second Seminole War and was fought between the Seminoles and the U.S. Army.

“Due to the historic nature of the adjoining property… they will need a different solution,” Mayor Joseph Aufmuth said.

Aufmuth has a history of preserving important archaeological sites. He led the effort to form Micanopy’s Native American Heritage Preserve, a 16-acre site that contains part of the land where the Battle of Micanopy took place in 1836.

“The people of Micanopy also recognize the importance of saving our shared Micanopy history,” Aufmuth said.

Proponents of the expansion believe that moving into a different territory would prevent tampering with current burial sites.

“There are burials in the cemetery that are not marked, and no one wants to dig into one of those graves by accident when digging new graves,” said John E. Thrasher III, Micanopy Historical Society Museum and Archives curator.

For the proposal to pass, the Micanopy Town Commission will have to vote to transfer or sell the three town-owned plots to the Micanopy Historic Cemetery Association.

As of now, no property deeds or rights to the parcels in question have been transferred to any organization. No official action pertaining to any town parcel has occurred.

Some areas within the cemetery are fenced off, while others have tombstones made up of a tree trunk. Stray cats roam the area and fresh flowers are arranged all around.

Lloyd, who has family members in the cemetery dating back to the mid-1800s, said she wants her lineage to be laid to rest in the same burial ground.

“I do not as of yet have a plot for my own family,” Lloyd said.” The expansion may be the only place for our final resting places.”

Jung is a reporter for WUFT News who can be reached by calling 352-392-6397 or emailing news@wuft.org.
Previous Feb. 26, 2020: Morning News In 90
Next Gainesville Driverless Shuttle Suspended After Woman Hurt On One in Ohio