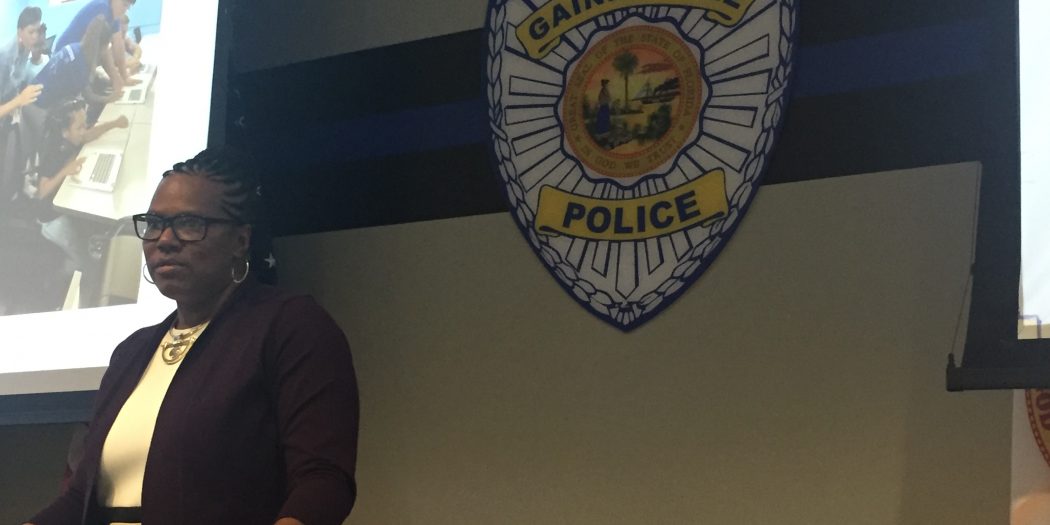 Commissioner Gigi Simmons held her second State of the District address on Wednesday. The address was hosted by the Black on Black Crime Task Force at the Gainesville Police Department. (Alcino Donadel/WUFT News)

Rosa Williams shook hands with the assembled Gainesville city and police leaders minutes before residents gathered to focus on progress in District 1 on Wednesday.

For the second year in a row, City Commissioner Gigi Simmons offered a state of the district address in front of the Gainesville’s Black on Black Crime Task Force, of which Williams is the founder. The meeting took place at Gainesville Police Department headquarters.

“I was honored to be invited,” Simmons said. “It’s extremely important to have this conversation here.”

Simmons said the venue provides a more inclusive and welcoming environment for attendees to be informed.

“It gives you a different audience, view and purpose,” the commissioner said. “Everybody can tune in to what is going on in their communities.”

District 1 is comprised of historically black neighborhoods like Porters and Pleasant Street, along with much of East Gainesville — an area of the city long fraught with economic, racial and social divides. Simmons won a runoff election in 2018 to represent the district.

Simmons invited various city department leaders to discuss the social, environmental and economic progress in the past year. Community Redevelopment Agency Director Sarah Vidal-Finn spoke about the completed infrastructure for the agency’s Heartwood housing project, which hopes to attract investments into East Gainesville.

“I wanted these departments to come out and highlight what progress we’ve made in District 1,” Simmons said.

“We continue to meet to make this community safe and enjoyable,” Jones said.

Jones then deviated from the agenda to offer a surprise to Executive Lt. Paris Owens with an announcement that led to a standing ovation from those present.

Owens, who grew up in Duval and is a task force member, will soon be promoted to captain, becoming the first black woman in the department to reach that position, Jones said.

Owens was taken aback by the announcement and the heavy applause.

“They advised me I was going to be in an acting capacity as captain,” she said, “but I definitely wasn’t expecting that.”

Alcino is a reporter for WUFT News who can be reached by calling 352-392-6397 or emailing news@wuft.org.
Previous Emotions Run High At City Meeting About Changing Gainesville’s Inequity
Next The Point, Sept. 19, 2019: A Decade After Its Enactment, Alachua County Is Enforcing The Airboat Curfew Ordinance