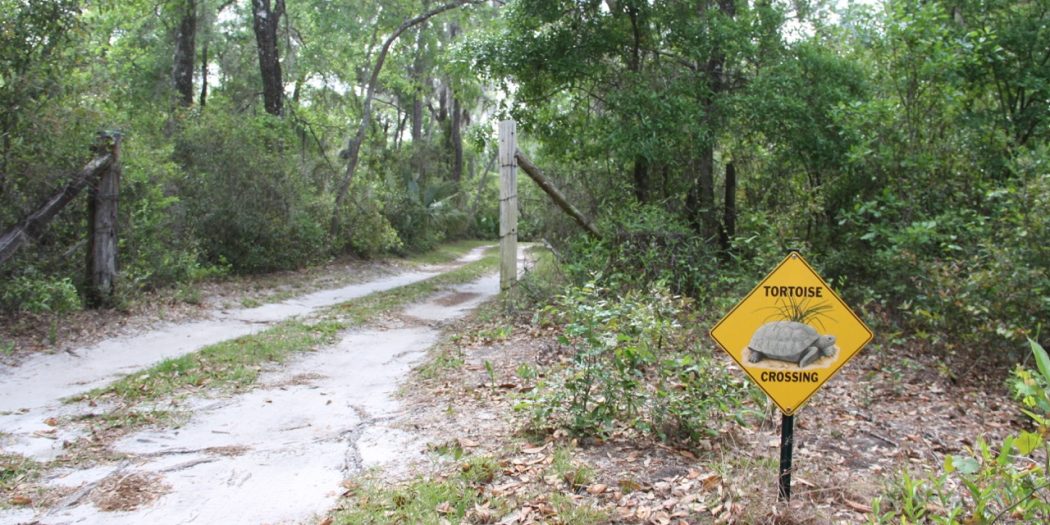 A sign on the property of Archie Carr’s family that indicates tortoises live on the property. Gopher tortoises are one of the four rare species associated with the Carr Farm project. (WUFT News/Meryl Kornfield)

How Will $100 Million A Year In New State Funding For Land Conservation Affect Alachua County?

With $100 million a year Florida has budgeted for land acquisition and conservation, Alachua County could have the funding to buy 13,351 acres of land for future parks.

The funding was unanimously passed by the Senate as part of Senate Bill 370 on Jan. 31 and added to the state budget. The $100 million will go to the Florida Forever Trust Fund, which has a list of private properties the Florida Department of Environmental Protection has decided should be public property. The list, organized by priority, includes six projects in Alachua County, nine in Marion County, three in Clay County and two in Bradford County.

Florida Forever is a statewide program but partners with county agencies to manage properties. The program was created in 2000 and “reinforced Florida’s commitment to conserve its natural and cultural heritage, provide urban open space, and better manage the land acquired by the state,” according to its 2017 five-year plan.

The latest project in Alachua County, the Lochloosa Forest, was added in October of 2017 and is to be managed by the University of Florida. The director of Alachua County Parks and Conservation Lands Charlie Houder said UF also manages the neighboring Austin Cary Forest.

Still, before that happens, Florida Forever, partnered with Alachua County Forever, needs to find about $5 million to pay for the 4,693 acres of privately owned land they hope to buy.

“Negotiations with the landowners are slow but we maintain communication,” he said.

While Houder and others actively work to negotiate with the landowners and purchase properties, Alachua County also advocates with the Acquisition and Restoration Council in Tallahassee who rank the project priority list twice a year in December and June.

“My hope and expectation is within the next two, three years, we are going to be able to move (Alachua County projects) up in the priority,” he said.

While state funding will go to higher priority projects, the additional money added will make it more likely for low-priority projects like the Lochloosa Forest to be taken on, Houder said.

“The more money that comes into the program, the more properties are able to be acquired,” he said. “That frees up funds for other projects.”

Houder said the county tries to match the state in contributions for each project. The county’s funding source is a fee from the Wild Spaces and Public Places program.

Senator Keith Perry co-sponsored Senate Bill 370 and saw the effects of investing in the environment at a groundbreaking of Holly Hills flood mitigation project on Friday.

Perry said there is “a good shot” Alachua County will see more land acquired from this additional funding.

“Anytime you have more money in the pot, the state of Florida benefits,” he said. “I think you are going to see a lot of money spent, and when I say spent, I mean invested.”

Houder said acquiring the land can aid in improving water quality and ecology, providing a corridor for wildlife and offering a recreational space. The acquired lands are outfitted with public trails.

“There’s a whole host of benefits,” he said.

In addition, the projects Florida Forever supports could have historical value.

Carr Farm, which is in Alachua and Marion counties, was placed on the priority list in 2001, and so far, the government has bought 962 acres for $1,975,000, according to the Office of Greenways and Trails. Florida Forever’s latest funding could provide the necessary money to pay for the last 305 acres of the property owned by the family of late Florida naturalist and pioneering conservationist Archie Carr.

Florida Forever classified the project as a priority because it could offer space for recreational activities including limited freshwater fishing and canoeing, primitive camping and hiking trails. Carr Farm also has four rare species, one including the Gopher Turtle.

But, the property comes with another unique landmark — the former cabin of Archie and his wife Marjorie Carr.

Peggy Carr, a professor of landscape architecture, is the daughter-in-law of Archie Carr and said her family is interested in selling their land to the state, not only because of its connection to Florida’s environmental history but its importance as an ecological corridor.

The Carr property sits between public lands, the Barr Hammock and Price’s Scrub, but is considered a low priority by Florida Forever.

“The land is very important for connecting larger tracts so plants and animals can move through them,” Carr said. “We will try to increase its ranking and work to see it protected.”

She said she expects there will be more acquisitions from the increased funding and that will benefit the state’s conservation efforts.

“For a while, there was such little land acquisition, so now we are starting to see some money become available. We are going to see a lot of projects completed for that money,” she said. “We think it’s a move in the right direction, not just because of our project, but the importance of conservation statewide.”

Florida Forever is also looking to buy 9,508 acres for $3,664,230 around Lake Santa Fe in Alachua and Bradford counties, according to the 2017 five-year report. It already acquired 878 acres for nearly $2 million but wants a tract of shoreline that offers the only refuge for the nests of wading birds left on the lake. The Florida Forest Service and the Fish and Wildlife Conservation Commission manage the project, according to the five-year plan.

Dee Ann Miller, a spokesperson for the Florida Department of Environmental Protection, wrote in an email that the Florida Forever program has saved the habitat of 320 different rare species since it was founded in July 2001, including 133 species listed by the federal or state governments as endangered and 61 listed as threatened.

Miller said projects that are ranked and categorized are managed by the DEP.

“DEP’s Division of State Lands and its acquisition partners negotiate with owners to buy land on behalf of the people of Florida,” she said. “Land acquisition by the Florida Forever program is almost exclusively voluntary.”

Meryl is a reporter for WUFT News who can be reached by calling 352-392-6397 or emailing news@wuft.org.
Previous Easter Sunday SWAT Scare Shakes Gainesville Neighborhood
Next Apr. 2, 2018: Morning News In 90