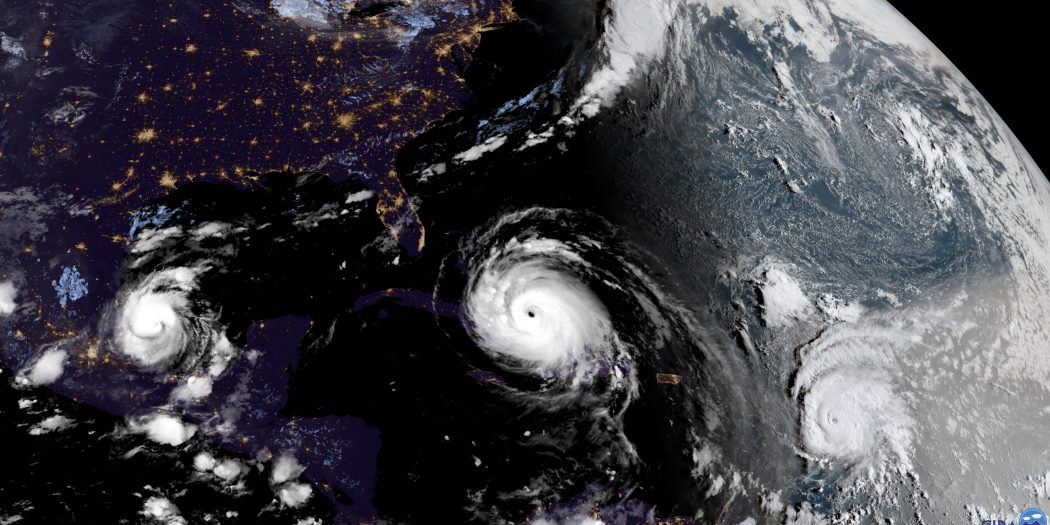 In this geocolor image GOES-16 satellite image taken Friday, Sep. 8, 2017, at 10:45 UTC, Hurricane Irma, center, approaches Cuba and Florida, with Hurricane Katia, left, in the Gulf of Mexico, and Hurricane Jose, right, in the Atlantic Ocean. Cuba evacuated tourists from beachside resorts and Floridians emptied stores of plywood and bottled water after Hurricane Irma left at least 20 people dead and thousands homeless on a devastated string of Caribbean islands and spun toward Florida for what could be a catastrophic blow this weekend. (NOAA via AP)

As massive Hurricane Irma battered Florida on a path up the Gulf Coast, Gov. Rick Scott on Sunday advised residents against rushing out once the storm appears to have passed.

Irma made landfall about 9 a.m. Sunday at Cudjoe Key — less than 30 miles northeast of Key West — with maximum sustained winds of 130 mph. Water was reported to be covering U.S. 1 in Monroe County.

By midday, the center of Irma had exited the Florida Keys and was approaching a second landfall in Southwest Florida and will continue to be over the state through Monday. But the impacts are already widespread.

Nearly 2 million homes and businesses were without power, mostly in Miami-Dade and Broward counties, according to Florida Power & Light, which was reporting crews working to restore power Sunday morning as far north as Manatee and Brevard counties.

“We are about to get punched in the face by this storm,” warned Tampa Mayor Bob Buckhorn on Twitter. “We need to be prepared.”

Amid talk of Irma inundating much of the Gulf Coast with up to 10 feet of water, state Sen. Dana Young, R-Tampa, tweeted a photo of Tampa Bay.

“Hours before Irma hits, the water is literally being sucked out of Tampa Bay,” Young noted.

Irma hit the Keys as Category 4 system, with maximum sustained winds of 130 mph. At 11 a.m., the system’s eye was about 80 miles south-southeast of Naples.

“While weakening is forecast, Irma is expected to remain a powerful hurricane while it moves near or along the west coast of Florida,” the National Hurricane Center reported.

Hurricane-force winds reach out 80 miles from the center, and tropical-storm force winds extend up to 220 miles.

Scott, who earlier declared a state-of-emergency for all of Florida, on Sunday requested “a major disaster declaration” from President Donald Trump to increase federal assistance.

At least three deaths have already been tied to the storm.

A trucker transporting a generator died after crashing in Monroe County.

In Hardee County, Deputy Julie Bridges, a 13-year veteran driving home after working at an evacuation shelter, and Sgt. Joseph Ossman, who had been with the Florida Department of Corrections for 21 years, both died in an early morning head-on crash.

Scott said recovery efforts will follow the rolling barrage of Irma as the storm moves north.

“We’ll try to get down to the Keys as quickly as we can because that is the first place where we’re going to have significant damage,” Scott said. “And we’re going to have to assess, did we lose bridges? Do we have recovery efforts? Can we even fly in with the airports down there? We’ll figure out what we need.”

The entire Florida National Guard has been activated.

Urban search-and-rescue teams have been set up at the Orange County Convention Center and Eglin Air Force base. Another has been positioned in Tupelo, Miss., for possible air deployment to Key West. Similar units from Tennessee and Louisiana are being staged in Tallahassee, according to Patronis’ office.

Most fuel delivery into the state is on hold until the reopening of the state’s ports.

All Florida seaports except the Port of Panama City and the Port of Pensacola have been closed by the U.S. Coast Guard. The two Panhandle ports are expected to face gale-force winds within 24 hours, and restrictions that prohibit inbound traffic and limit movement within the ports are in place.

More than 127,000 people have taken to the more than 460 shelters opened throughout the state. Another 70 shelters for people with special needs have received 12,000.

More than 6.5 million people have been ordered to evacuate their homes.

The Sunshine Skyway Bridge in the Tampa Bay area has been closed, as have 45 airports, including all international facilities from Daytona Beach south.

The state has closed 168 state parks and 30 state forests.

The News Service of Florida is a wire service to which WUFT News subscribes.
Previous Levy County Residents Under Mandatory Evacuations
Next South Floridians Use Social Media To Share Storm