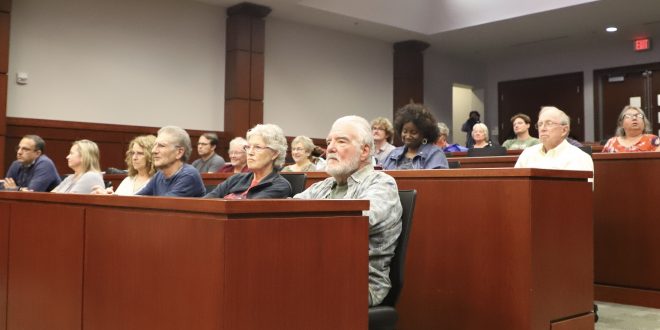 Audience members listen and react to the first responses of the debate from the candidates. (Serra Sowers/WUFT News)

Some attendees at the Gainesville mayoral debate Tuesday night said they came away with a clearer picture of who they will vote for by Nov. 8. Others said they needed to hear the debate again.

Candidates Ed Bielarski and Harvey Ward feuded at the University of Florida Levin College of Law in their only debate prior to election day.

About 50 voters attended in addition to guests of the two candidates and journalists from WUFT and the Gainesville Sun. There were 113 registrations, but the turnout was lighter than expected.

The room remained politely quiet throughout the event, though there was one concern raised by a man early in the debate, because he could not hear. Three attendees left out of frustration with microphone echoes in the room.

Voters like Nancy Detweiler, a retired social worker who has lived in Gainesville for 40 years, came to the debate because she was unsure of who to vote for. She said she was most interested in hearing about Gainesville Regional Utilities issues and solar energy plans.

“Bielarski has been maligned unfairly, but I’ve been persuaded to hear him out,” said Detweiler, who said she usually votes blue.

Others came in already decided. Judy Locascio, 63, is an insurance agent who has lived in Gainesville her entire life. She knew she wanted to vote for Bielarski since he announced his candidacy. Nothing at the debate changed her mind.

Kali Blount, a retired registered nurse who has lived in the Southeast Residential Historic District near GRU headquarters since 1987, said he was leaning toward Ward. He said both candidates showed hope, especially when it came to inclusionary housing.

“I have hope that there’ll be some reforming of city politics with either of them, but I’m not sure who would be able to carry it off the furthest the fastest,” Blount said.

Despite attacks on one another, the two candidates agreed on select issues such as support for the Wild Spaces Public Places referendum and undoing the elimination of single family zoning.

After the debate concluded, a handful of audience members rehashed the talking points with people around them. Others walked out wishing they were able to hear more of the conversation and said they look forward to listening to a replay.

Pam Carpenter is retired and has lived in the city since 1965. She attended because she wanted to do her “homework” and listen to both candidates but had a hard time hearing, she said.

“I’m looking forward to going home and actually listening to the replay,” Carpenter said, after wishing she had heard when they talked about budget items. “I’m hoping that will be clarified when I can hear it.”

Ward and Bielarski captured the highest number of votes in the primary election Aug. 24, where there were initially nine candidates. Gainesville residents who are registered voters are eligible to vote during early voting and on Nov. 8.

The winner of this election will replace current mayor Lauren Poe, who has served as Gainesville’s mayor since 2016. The new mayor’s term will begin in January 2023 and is four years.