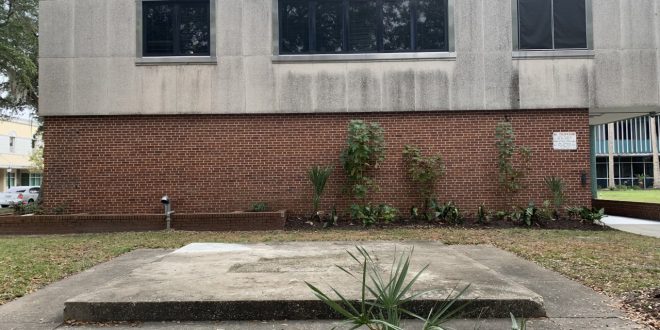 The slab outside the Alachua County Administration Building has been empty since 2017 when the Confederate soldier statute was removed. (Matthew Bell/WUFT News)

Editor’s note: The story was revised to include a more accurate definition of the “Sankofa” concept.

The Alachua County Board of Commissioners unanimously agreed that a new statue will honor the work of late Dr. Patricia Hilliard-Nunn.

The statue will be centered around truth and reconciliation. The statue is inspired by Sankofa, an African word from the Akan tribe in Ghana that’s often represented by a backward-facing bird reach for an egg.

“Sankofa,” which means to “go back to the past and bring forward that which is useful,” is emblematic of Dr. Hilliard-Nunn’s trailblazing work in Alachua County.

“Alachua County’s logo on the sign when you enter is, ‘Where nature and culture meet,'” Cornell said. “It kind of ties it all together. It’s really, a nice thought.”

The board also approved an increase in spending on the statue.

Two other prominent African American leaders from the Alachua County area were considered in addition to Dr. Hilliard-Nunn.

The Reverend T.A. Wright and Dr. Cullen Banks were also selected by the Alachua County Historic Commission for this work.

“They’re all deserving, but I’m sort of partial to Dr. Patricia Hilliard-Nunn because of her activism, her commitment and everything that was going on in the community, every celebration, every holiday,” Chestnut said. “She was there, giving her input.”

The board is now asking artists to send in proposals for the piece.

Matthew is a Digital Producer and Reporter for WUFT. His work focuses on sports and education, but he ventures out into other areas as well. In the spring of 2021, Matthew worked for ESPN Gainesville where he provided hourly sports updates and wrote for the website.
Previous The Point, Dec. 15, 2021: Florida has returned funding that was withheld to punish the Alachua County School District
Next Former slaves and others are buried at this Archer cemetery. A group is trying to preserve its history

On Jan. 22 of next year, the Wooly is hosting a themed Taylor Swift night at the Wooly in downtown Gainesville.