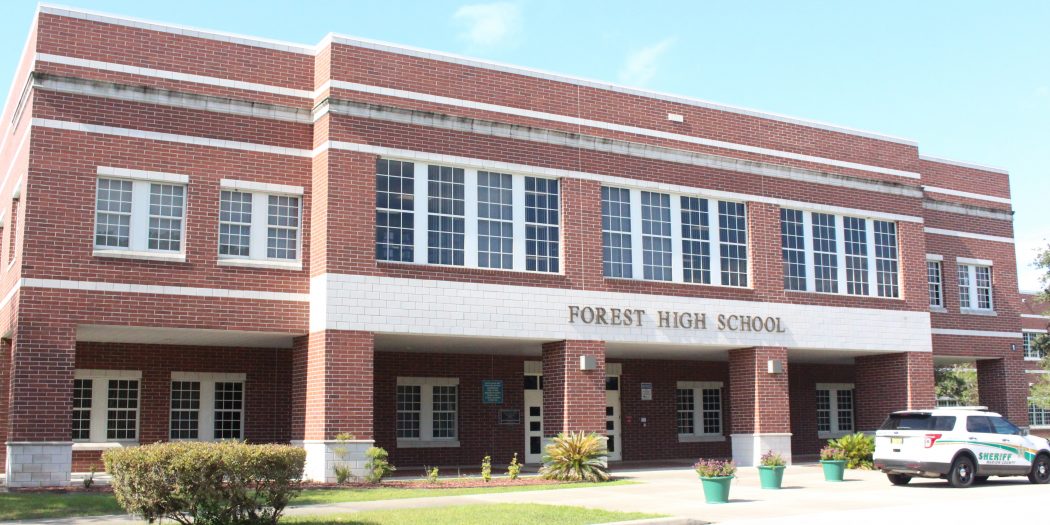 Forest High School has had issues with its restrooms being vandalized since the “Devious Licks” trend started. (Jake Reyes/WUFT News)

Nicholas Kelly was just another teenager at Forest High School in Ocala who scrolled through TikTok and laughed at “Devious Licks,” a popular challenge where students vandalize their schools.

The 17-year-old senior stopped finding these TikToks funny after the trend came to a restroom at his school when some students ripped soap dispensers off the walls and scattered torn items on the floor.

Forest is just one of the schools in Marion County that has been vandalized from this trend. In response, schools are limiting students’ time away from class, and law enforcement is arresting teenagers across the county.

“It’s out of pocket,” Kelly said. “I can see the trend, and it’s funny, but the way the schools are reacting is not fun.”

Kelly said Forest is now monitoring how long students are in the restrooms. He also said a staff member would sometimes stand outside of a restroom and yell “time to go” to students who they think are in it too long.

Deputies arrested eight students from 11 incidents that week, he said.

Because teenagers are juveniles, the sheriff’s office gives the first-time offenders an alternative punishment called Work in Lieu of Arrest to avoid charges and keep their records clean.

As long as the teenagers were arrested for misdemeanors, which includes stolen or damaged property under $1,000, their Work in Lieu of Arrest sentence requires them to work on a farm in the county where cattle, pigs and chickens are being raised, and crops are being tended to.

“For the next five Saturdays, they are out there working on the farm pulling weeds, working in the barns, dealing with dirty work on a farm,” Bloom said.

However, only four of the teenagers qualified. It’s unclear whether the other students are pending qualification approval or if they do not qualify after being arrested before.

If a teenager has been arrested before, they are turned over to the juvenile detention center and face charges in court, Bloom said.

However, he’s certain there’s more than what’s being reported to the sheriff’s office. He said school administrations sometimes handle the punishments themselves.

Marion County Public Schools spokesperson Kevin Christian said there have been at least 20 incidents in the county since the trend started. As of Sept. 24, nine students have been arrested because of it, he said.

It’s not just soap dispensers being torn off the walls. Christian said mirrors, hand dryers and even urinals have been damaged and are requiring replacements.

“All of our high schools are dealing with it…,” Christian said. “We’re concerned that it’s going to trend down into the middle schools… these kind of decisions are not smart decisions, and it’s really decisions that could impact their graduation, even their college careers if they want to go on for higher education.”

Christian said an anonymous high school is even thinking about canceling homecoming if this behavior continues.

The county lost thousands of dollars in damages to the “devious licks” trend already, and replacing these items comes out of taxpayer dollars because it’s a public school system, Christian said.

The pandemic isn’t making it any easier. Christian said worldwide shipping issues from the COVID-19 pandemic are making it hard to get the replacements.

“It’s not like we have dozens and dozens of hand dispensers or soap dispensers and hand sanitizers,” he said. “In our warehouse, we don’t. It’s hard enough to get them, let alone replace them.”

Janitors and plumbers have also been frustrated with the TikTok trend, Christian said. He said they clean up after the mess, and it may take them an entire day to restore the damaged property, taking away their time from working on other projects in the county.

As of Sept. 23, Kelly said Forest fixed the vandalisms in the restroom, but some students are still stealing computers from the school.

The “devious licks” have been an issue in schools across the country. In Bullhead City, Arizona, a 15-year-old student was arrested for stealing a school toilet paper dispenser, according to a Bullhead City Police Department Facebook post.

In Robertsdale, Alabama, a high school student was arrested after stealing a fire extinguisher in another TikTok video, WVTM13, a Birmingham TV station reports.

Alachua County Sheriff’s Office spokesperson Art Forgey said nearby Alachua County hasn’t had a “devious lick” case, but school resource deputies are on the lookout if any incident occurs.

According to USA Today, the series of events caused TikTok to ban videos with a “#deviouslick” in its caption. Kelly said he saw the video that showed a bathroom at Forest getting vandalized, but TikTok has removed it.

However, Christian said students know how to get around the ban by changing the words in the TikTok video’s hashtag and there are still incidents occurring.

MCSO, MCPS and Ocala Police Chief Mike Balken notified parents of all middle and high school students about the current situation. In a voice message, MCPS and Balken warned that students who are caught doing this challenge may face suspension or expulsion and could be arrested.

Jake is a reporter for WUFT News who can be reached by calling 352-392-6397 or emailing news@wuft.org.
Previous Alachua County property owners can expect a spike in taxes
Next Alachua County Sheriff announces arrests in recent bomb threats at Newberry schools