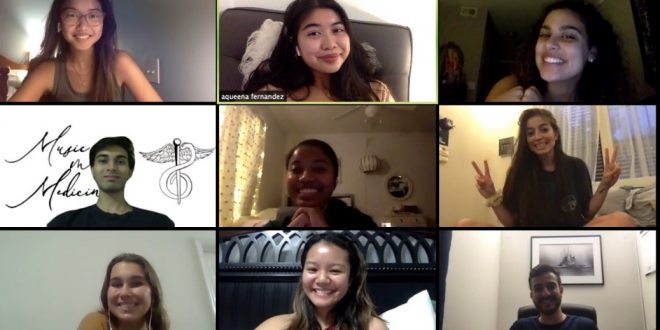 With music shown to be therapeutic in a clinical setting, Danielle DuPuis, 20, co-president and founder of Music Meets Medicine, decided that quarantine was not going to stop her from giving back to the community.

21-year-old Gustavo Antezana, the service director for Music Meets Medicine, said that his previous volunteering experiences involved playing music for patients with dementia. When COVID-19 hit, he missed the music therapy he has previously engaged with.

With their team having to structure the organization remotely, they began a YouTube channel and started a research journal club exploring topics of music and medicine, including palliative and pre-natal care.

The videos are distributed to and played at the Malcom Randall Veterans Affairs Center, Brooksdale Senior Living Facility and Al’z Place, a center for patients with Alzheimer’s disease.

“When I started this club, it was based off of service that was taking place at the Malcom Randall VA Medical Center, which was a program called Music for our Veterans that allowed students to come in to play music for the veterans,” DuPuis said.

Bravo said DuPuis reached out to her during the summer and got to work in creating their organization.

DuPuis said after a summer of getting through the “rules and regulations” for gaining approval to distribute their videos to the Malcom Randall VA Medical Center, they officially launched their club at the University of Florida in the fall.

“It’s wild to see how much of a change music can really make,” Bravo said.

Even as a new organization, DuPuis said the group is already working to expand its reach.

“Since we’ve been working with the VA, we are currently in the works of spreading our music videos to all the VA hospitals across the country through their ‘Get Well Network,’” she said.

She explained any VA Hospital with access to the `Get Well Network’ will have access to their videos, thus enabling widespread distribution of UF Music Meets Medicine.

Furthermore, she said that although being online has proven to be difficult, it has helped them improve accessibility and spread their `musical joy’ to other hospitals.

“A lot of the organizations that we send music videos to have expressed interest in having our members come in person when it’s safe,” DuPuis said.

“Al’z Place is beginning to send us submissions for birthday songs, which I think it’s really amazing because if you’re suffering from these neurodegenerative diseases, it’s so heartwarming to have some student send you a happy birthday song,” Bravo said.

Bravo said that the team spends hours preparing their videos and providing a personal touch in order to make the greatest impact.

“It’s been really cool to work with these organizations because since they’re not directly affiliated with UF, I feel like they might not get as much attention from the student body, DuPuis said. “So it’s been really nice to get involved with other health care facilities that are not directly UF connected.”

Antezana said nothing compares to the reaction patients have to the videos they create. He said they constantly receive emails praising the video content they create for patients.

Music Meets Medicine plans to continue posting videos to YouTube and adapting to a hybrid format while vaccines continue to roll out .

“As long as we have guidelines that are set, we should be good to begin transitioning back into person,” Antezana said.

He said the videos have been a great influence on the community, and the group plans to continue filming and distributing their videos online even when restrictions ease.

“Music is so powerful, and it can reach into your soul so well, and hopefully it can help these people with these disorders and maybe bring back some memories because they feel a link back to the music,” Bravo said.

Aeja is a reporter for WUFT News who can be reached by calling 352-392-6397 or emailing news@wuft.org.
Previous The Point, March 31, 2021: Will Vaccines Prevent Virus Spread? UF Study Aims To Find Out
Next UF To Provide COVID-19 Vaccines To Campus Community