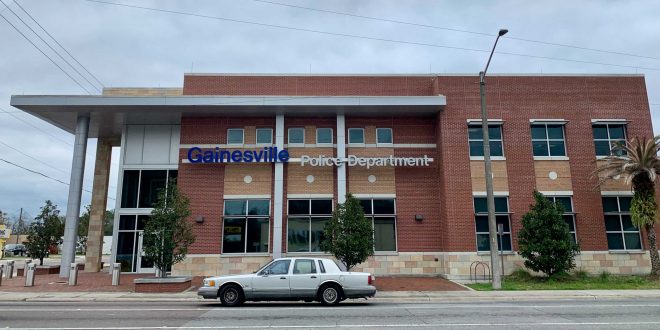 An arrest report says that after Cpl. Scott Bertzyk performed poorly on field sobriety tests, he was taken to Gainesville Police headquarters where he blew two breath alcohol samples of .153 and .156 — nearly twice the legal limit. (Alex DeLuca/WUFT News)

A Gainesville police corporal who was arrested by his own department on suspicion of drunken driving has been stripped of his police powers.

Cpl. Scott Bertzyk, 46, was arrested in the early morning hours of Jan. 1 after rear-ending a car on Newberry Road near the Oaks Mall, according to a Gainesville Police Department arrest report. He was charged with one count of driving under the influence with property damage – a first-degree misdemeanor which carries up to a year in jail and a $1,000 fine.

Court records show Bertzyk caused an estimated $8,000 in damages during the crash. No injuries were reported.

Bertzyk — a 15-year veteran of the force — was off duty at the time of his arrest, GPD spokesperson Graham Glover said. He was immediately suspended and placed on administrative duty pending a state attorney’s office investigation. On Jan. 7, he pleaded not guilty to the DUI charge.

Neither Bertzyk nor his attorney, Thomas Edwards, who made headlines in 2013 for his own DUI case in which he pleaded no contest, could be reached for comment.

According to the arrest report, an officer who arrived at the crash site around 1:30 a.m. found Bertzyk slurring his words and struggling to maintain balance. After he performed poorly on field sobriety tests, he was taken to Gainesville Police headquarters where he blew two breath alcohol samples of .153 and .156 — nearly twice the legal limit.

In addition to the DUI charge, Bertzyk was cited for reckless driving. But while court records show he was cited in the crash around 1:30 a.m., he wasn’t taken into police custody for the DUI until 5:15 a.m., according to the report. The reason is not clear in police records.

Glover declined to comment on the delay, citing the open criminal investigation.

The night of the crash, Tevin Gardner was stopped at a red light on his way home to Lake City when Bertzyk suddenly slammed into the back of his car, he said. His car spun and ended up on the other side of the road.

Gardner said that while waiting for police to arrive, Bertzyk told him he was just reaching down to get his lighter and didn’t remember what happened.

While Bertzyk’s arrest report doesn’t mention the detection of any odor or discovery of alcohol at the scene, Gardner said he smelled alcohol and saw beer cans littered around Bertzyk’s car. He noticed Bertzyk was drunk, he said, when he asked him for his auto insurance information and watched the officer struggle to pull it up on his phone.

“I’m trying to help him with his insurance on his phone, like trying to click it for him, but he’s on the homepage to the Progressive page,” Gardner said. “I’m like bro, you’re not even logged in.”

Two weeks after Bertzyk’s arrest, another local law enforcement officer was arrested by his own agency.

Edwaldo Santos, a former Alachua County detention officer, was arrested Jan.15 on two counts of aggravated assault after threatening to shoot two people over a parking dispute, according to an Alachua County Sheriff’s Office arrest report. ACSO spokesperson Art Forgey confirmed Santos was fired from the sheriff’s office on Wednesday.

According to the report, Santos, 57, had a conflict with two people in a Waldo parking lot on Dec. 20 where he pulled out a gun and pointed it in their faces. One of the victims told police Santos had his finger on the trigger and threatened he could “shoot anyone of you.”

While Santos started laughing and placed the gun back in his waistband, saying he was only kidding, the victims told police they feared for their lives and thought he was going to shoot them, the report reads.

Bertzyk has a pre-trial conference scheduled for Feb. 18.

Alex is a reporter for Fresh Take Florida, a news service of the University of Florida College of Journalism and Communications, and can be reached at adeluca@freshtakeflorida.com.
Previous Feb. 2, 2021: Morning News In 90
Next UF’s McCarty Woods Conservation Area At Risk For New Development