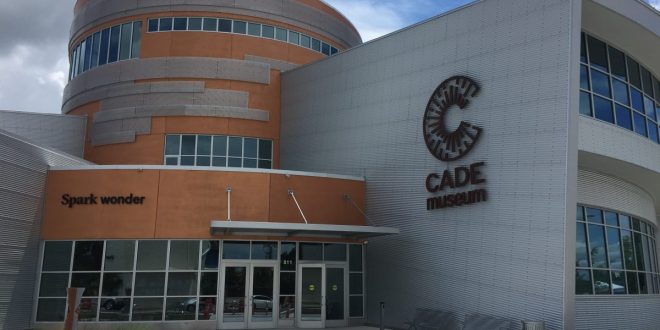 The Cade Museum is one local institution trying to stem the dropoff in local tourism revenue. (WUFT News file photo)

The tourism industry has been hit hard during the pandemic, but Alachua County is working to combat the harsh effects locally.

A discussion during a tourist development council meeting Wednesday afternoon spotlit those efforts.

A statewide drop in tourism contributed to a 66% sales tax revenue decrease at this point in 2020 compared to the same time in 2019, the largest of any Florida industry, according to Alachua County Tourism Manager Jessica Hurov. In Gainesville, sales tax revenue dropped 49%, though Gainesville and Tallahassee have the lowest tourism unemployment rate at 8.7%. The news locally may also be trending more positively, Hurov said, as over 82,653 hotel room stays were sold in the county in June , a steady increase since April.

Hotel stays are attributed mostly to people on long drives passing through and needing a place to stay, she said. Youth baseball and softball have returned to Champions Park, helping the hotel stay figures, according to Gainesville Sports Commission executive director Joleen Cacciatore.

Despite increases in tourism since the onset of the pandemic in March, overall demand might not fully recover until 2023, according to state predictions.

The worst, though, is believed to be in the past, Hurov said.

The council and Visit Gainesville are using information from Skift Research to plan ahead for guests.

Research shows that 65% of people’s first trips are predicted to be in a car and within 100 miles of their home. Because of this, efforts have been made to target residents of places like The Villages to visit Alachua County, according to Elizabeth Reyes, who is Visit Gainesville’s sales and marketing manager.

Residents of the Villages are often visited by grandchildren during the summer months and likely have free time and disposable income to travel, making them the perfect target market, according to Reyes. Print, radio, tabloid and possibly television ads will be used to attract these visitors.

Efforts are also being made to advertise in Florida Gator Magazine as a way to encourage university alumni to vacation in Gainesville, according to Reyes. Gainesville tourism is often heavily influenced by UF and its football season, so future planning is dependent on the UF Reopening Plan, which is to be released Friday, and the football plan — to be released later this month.

The uncertainty around the future makes planning for tourism difficult, but places like the Cade Museum for Creativity and Invention is introducing exhibits to help drive visitors.

Visitors can learn about “cool” inventions from Florida like the air conditioning and refrigerator as part of the “Science of Cool” exhibit available until August 23, according to marketing director Sue Draddy. The exhibit also features an artificial ice rink. Other exhibits to come include “Moon to Mars” through October 31 and “Brain: The World Inside Your Head,” which debuted at the Smithsonian Institution, starting in September.

Visitors are only 30% of what they were last year, but a lot of other organization benchmarking shows visitors down 95%.

“We feel we’re starting to gain momentum and our hope over the next few weeks with all these exhibitions is to increase our traffic,” Draddy said.

Cade Museum is implementing a program called Playcation in conjunction with Visit Gainesville, according to Draddy. The program launches in August and is meant to highlight local attractions in Gainesville to draw visitors. Cade has also partnered with Aloft hotels, where guests receive special rates on hotel rooms and free museum passes with their stay.

Tourists may also be looking to spend more time in Gainesville’s natural places. According to Sean Plemons, Tourism Content Manager at Visit Gainesville, the top webpage on the Alachua County website is the open parks and trails page. The page has an average four-minute viewing time.

Rachel is a reporter for WUFT News who can be reached by emailing news@wuft.org or calling 352-392-6397.
Previous Trump Points To Being ‘Flexible’ On Convention
Next The Point, July 9, 2020: With RNC Planning Underway, Jacksonville’s Safety Net Hospital Is Running Out Of ICU Space

Gov. Ron DeSantis on Thursday downplayed aspects of the Jan. 6, 2021, storming of the …