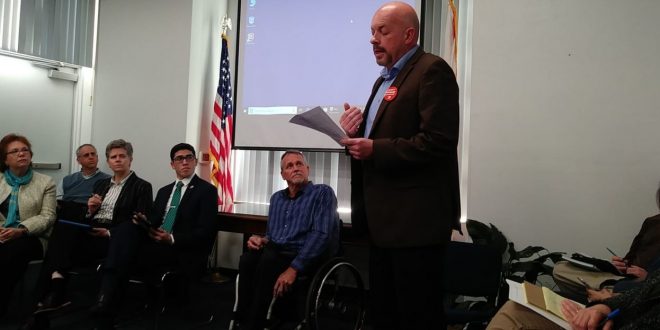 Professor Glenn Hayes speaks in front of the Santa Fe College Board of Trustees in January. Hayes is one of many adjunct professors trying to unionize. (Camille Graham/WUFT News)

Four adjunct professors from Santa Fe College gathered Tuesday night at the Emmanuel Mennonite Church to voice their concerns about unlivable wages and unfair treatment. The meeting, sponsored by the Alachua County Labor Coalition, was part of an effort by the professors to unionize and advocate for higher wages and better working conditions.

The four professors, alongside dozens of other Santa Fe College (SFC) professors, filed for official union recognition from the Public Employees Relations Commission in Tallahassee. As of Tuesday night, they had not yet heard back from the commission.

The ACLC is working with Service Employees International Union, SEIU, which has started a campaign called Faculty Forward to help form unions at more than 60 college campuses in the country.

If successful, SEIU would represent more than half of all adjunct professors in Florida’s colleges.

For the 2018-2019 school year, SFC raised the salary of full-time workers to $12 an hour while part-time employees and adjunct professors received no raise. Those at the meeting discussed the next steps they can take toward gaining fairer pay and better conditions.

Santa Fe College pays adjuncts about $2,000 per class per semester. Adjuncts cannot work more than 30 hours a week, limiting the number of classes they can teach. Many adjuncts teach at multiple universities online to supplement their income.

Glenn Hayes, an adjunct SFC professor in the department of natural sciences, works for five universities, teaching up to 15 classes a semester. He said he joined the union efforts when he realized that his department only transitioned one adjunct professor to full-time in the 10 years he has been there.

The union campaign was impacted by Santa Fe College President Jackson Sasser’s recent announcement that he intends to retire February 1, 2020. Adjunct professors say the remaining months of Sasser’s term and the selection of the next president will affect their course of action.

Leila Frye, SFC director of Human Resources, has permission to speak on behalf of President Sasser about salary disputes and unions. She said the college is more focused on increasing funding through the legislature than addressing the union.

“Regardless of whatever that [union] effort is of those adjuncts,” Frye said, “this is an inclusive community, and there are already mechanisms in place for people to share what’s important to them.”

Hayes said he hopes Sasser emphasizes to the next president the importance of better conditions for adjuncts.

“I hope he or she knows that it’s not an us versus them mentality,” he said. “We’re all on the same page. We all want to make school better and invest in students better, but we (administration and adjuncts) aren’t ending up on the same page.”

Murray said she wants an adjunct professor or a member of the Alachua County Labor Coalition to be on the search committee for Sasser’s replacement. She hopes the next president provides improved treatment and better compensation for adjuncts.

“If you respect our experience and credentials as instructors enough to have us teach classes,” Murray said, “you should respect us as much as you respect the people that you pay an actual living wage to.”

Camille is a reporter for WUFT News who can be reached by calling 352-392-6397 or emailing news@wuft.org.
Previous Employees’ Right To Speak To Media Protected By First Amendment And National Labor Relations Act
Next Feb. 27, 2019: Afternoon News in 90