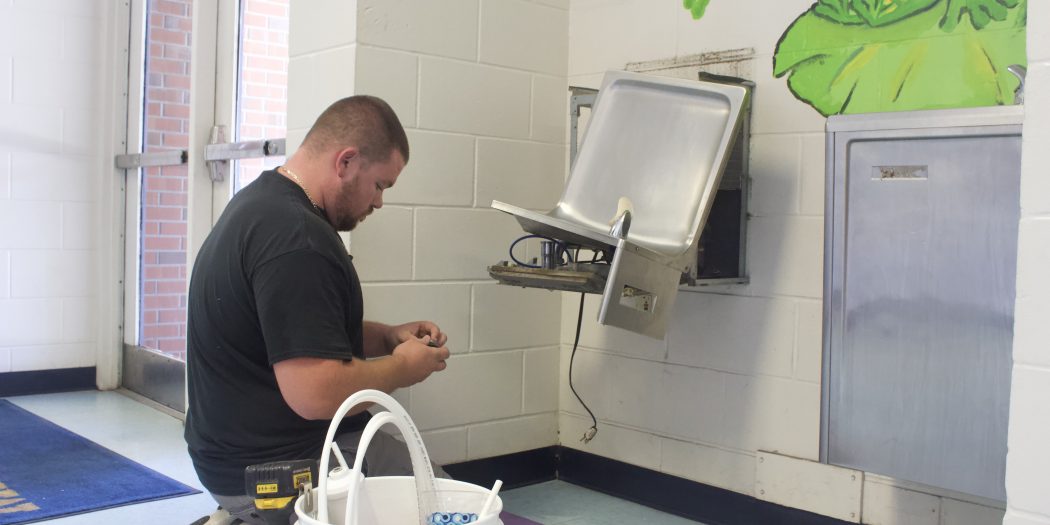 When Kathy Anderson learned about water testing in Hillsborough and Leon counties during a Florida PTA convention in July, she naturally wanted to share her findings with parents and staff at Foster Elementary School for the upcoming school year.

The school’s PTA president had previous knowledge on the subject, having pressed principal Lisa Peterson and the Alachua County School Board to conduct testing with Gainesville Regional Utilities (GRU) in June.

“I learned about all this information about lead testing over the summer and did not want to start the school year with [parents] not knowing,” Anderson said, stressing that she wanted to inform parents without causing panic.

Anderson’s attempts to request water testing in Foster Elementary were not addressed by the school board’s facilities department – which handles engineering and construction issues – for over three weeks, according to a series of school board emails from July 11 to Aug. 2.

By August, Anderson decided to take matters into her own hands.

An Aug. 2 email by Peterson details Anderson’s plan to inform Foster Elementary parents of her findings and persuade them to bring bottled water with their children on the first day of school. According to Anderson, the facilities department contacted and informed her afterward that the school district would install filters in Foster Elementary as a preventative measure before any water testing was done.

The school board is installing Omnipure K5615-KK filters certified by the National Science Foundation to reduce contaminants that pose a health risk in water. Each filter has a one-year lifespan and is designed to reduce lead levels below the Environmental Protection Agency’s “action limit” of 15 parts per billion.

“It was frustrating not having a response from facilities or kind of getting a few new different answers on who would be the point of contact for certain things,” Anderson said.

A Swift, Quiet Transition to Filters­

Filters have been installed at Foster, Idylwild, Littlewood and Shell elementary schools, as well as Duval Early Learning Academy; the district is currently installing filters at High Springs Community School and Metcalfe Elementary School. District spokeswoman Jackie Johnson said the school board plans to have filters installed in all district schools by March.

A public records request revealed the school district’s timeline for installing filters in its schools.

A public records request revealed the school district’s timeline for installing filters in its schools. All 36 public schools – and nine learning centers – have been categorized into zones with implementation dates.

The process began more than a year after WUFT reported the school board had begun working with GRU to develop a district-wide protocol for lead testing.

“We decided, ‘Why not go ahead and put all of the resources – both the time and the money – into just going ahead and installing [filters] in all of our schools?,” Johnson said.

Still, a July 12 school board email between Superintendent Karen Clarke and the board’s facilities department showed that board members were indecisive on how to test Alachua County’s schools as late as July.

Since then, GRU has declined to comment on the district’s decision to install filters. Water specialist Tony Cunningham noted that some GRU customers may have to deal with piping issues if lead problems occur in their own internal plumbing.

Why Filters Over Testing

Johnson said there is no issue between the utility and school district, only that the school board was determining the best way to approach lead testing. The spokeswoman cited financial costs and a lengthy testing process as reasons for transitioning to water filters, based on GRU’s testing of Meadowbrook Elementary School. GRU’s testing of the county’s newest school (built in 2012) contained false positives that forced the district and utility to reassess its testing protocol, according to the school board.

“It was definitely a learning experience,” Johnson said. “That’s why we just decided ‘y’know, let’s just go ahead and – even if we don’t know whether or not there is a problem, this guarantees that there won’t be.’”

“If the filters are properly installed and maintained at all drinking stations – including faucets, bubblers and fountains, where kids, teachers and nurses get drinking water from – I think it is a worthwhile endeavor,” Roy said.

The school board has not made an official announcement regarding the district’s change to installing filters. Johnson said it was important to preemptively install filters to allay any concerns about drinking water.

“I think we went ahead and just didn’t wanna take any chances and make sure we got this done, even though we haven’t found any lead in the water yet,” Paulson said. He emphasized: “We have not found lead in the water, but we’re just not taking a chance.”

Still, Anderson felt as if her plan to inform parents of concerns about water testing prompted the school board’s response to quickly install filters at Foster Elementary.

“I feel like if I shared the news to my community in my first [PTA] meeting, or at a county board meeting, that Foster was done [with testing], that ACPS would have to move faster on public schools because it’s a public concern,” Anderson said.

Dr. Ronald Saff, a Florida State University College of Medicine professor in Tallahassee, last year tested water in Leon and Wakulla schools. He said school districts need to install filters as soon as possible to protect the health of children.

“School boards and superintendents are just dragging their feet and putting politics ahead of children’s brain health,” Saff said. “There’s no good reason that these schools should not be filtered already.”

‘We’re Not Letting This Down’

At least 4 million households have children exposed to high levels of lead, according to the Center for Disease Control. Lead can severely affect mental and physical development, especially in children younger than 6 years old.

Out of 36 public schools in Alachua County, 29 were built before 1986, when Congress enacted the Safe Drinking Water Act – prohibiting the use of pipes that were not “lead free” in facilities providing water for human consumption.

Out of those 12 schools, two schools – Finley Elementary and Williams Elementary – were built before 1940.

This map presents all 36 Alachua County public schools – excluding learning centers, detention centers and online programs – categorized by the year in which they were built. Schools with a red marker were built before 1986, when the Safe Drinking Water Act was enacted by Congress. Schools with this marker have a greater chance of containing lead in pipes that provide water for human consumption.

“We know that just about anywhere where you’re gonna have an old school – built before 1986 – you can pretty much count on the fact that there’s gonna be a lead problem,” Saff said, “because lead is more prevalent in pipes and plumbing in schools than any kind of construction before 1986.”

Saff said lowering children’s exposure to lead will help reduce cases of ADHD, reduce incarceration for aggressive behaviors and cultivate a smarter population. He said parents are obviously in agreement when they do not want their children losing brain cells and IQ points as a result of exposure to lead contaminants.

As the filter installation proceeds, Johnson said the school board is also reaching out to inform voters of the Half-Cent for Schools initiative on the November ballot. The sales tax, expected to raise $240 million over a decade if passed, would help repair aging district facilities by levying a half-cent sales surtax.

The enactment of the half-cent initiative could raise up $22 million in revenue for ACPS each year, according to Johnson.

“In many cases, in many schools, we’d actually be knocking down buildings and building new ones,” Johnson said. “So, in that process, we’d be able to do a lot of work on the plumbing and piping.”

Although Anderson supports the half-cent initiative, she will continue to push the school board to address water testing in each Alachua County school upon receiving funds.

“We’re not letting this down,” Anderson said. “I think once the half-cent initiative goes through – even though they’re putting filters into the school system – they should still test and go with the older schools first that invest that money, because that’s what it’s there for.”

April Tisher, who is running against Paulson for his school board seat, also wants to see testing done, though she does agree with the district’s filtering strategy. Tisher said water testing was one of the first topics she heard about when she began running for office.

“I would like to see some tests from all the schools just to see what maybe we were filtering out, that actually specifically target lead,” Tisher said.

According to Book’s legislative assistant, Jeff Scala, the bill would impose a stricter monitoring of drinking water in Florida public schools. The bill would promote transparency by allowing the public to look up where each county stands on testing and identify the water sources used by each district’s public schools.

Water testing is not required by Florida school districts under federal law. Regardless, eight states have requirements that schools test for lead in water, according to the Environmental Protection Agency. Scala hopes to get a better idea of the bill’s progress after the November midterm elections and have a vote during the legislative session between March and May of next year.

“When I talk to parents, they don’t think it’s okay for their child to lose any IQ points,” Saff said. “When parents understand the situation, they want the schools to take action.”

Although filter installations were completed in Foster Elementary prior to the beginning of the school year, Anderson wishes the school board could’ve sent her a confirmation that the installation was complete.

“It would’ve been nice to have a follow-through after it was done,” she said, “to just kind of reassure us they had taken care of everything.”

Angel is a reporter with WUFT News and the Production Manager for GHQ – a top-40 radio station based out of the University of Florida. Angel can be reached at 813-810-6742 or by emailing angel.kennedy@ufl.edu.
@mrkennedya
Previous Operation Airdrop Brings Food, Supplies To Hurricane Michael Victims
Next Oct. 17, 2018: Afternoon News in 90