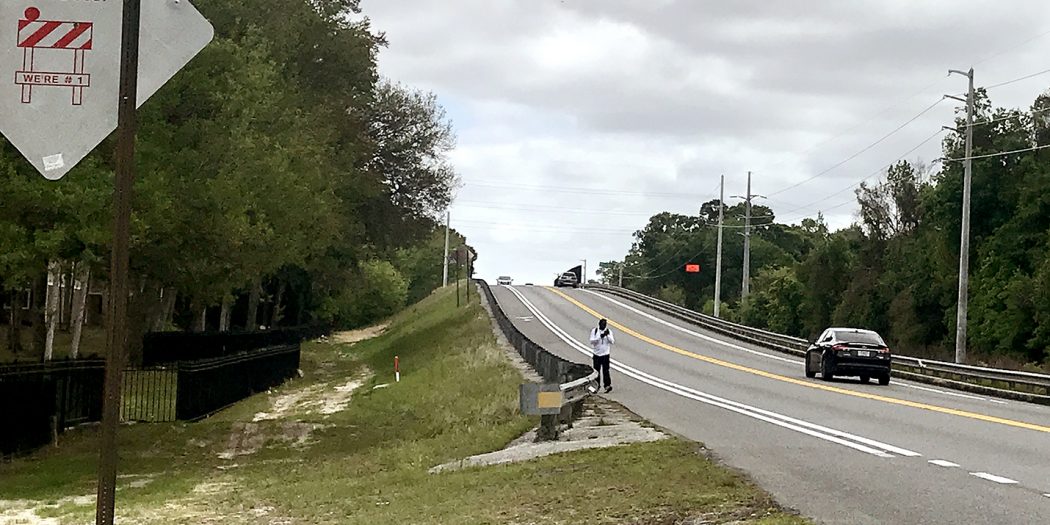 The I-75 overpass for Southwest 20th Ave. lack a sidewalk, which the Florida Department of Transportation I-75 project aims to address. (Zindzi Hamilton / WUFT)

State and county officials are conducting research to improve conditions along Interstate 75 within Alachua County, which is expected to address concerns regarding travel along the Southwest 20th Avenue overpass.

The Florida Department of Transportation is working on a multi-district study that seeks to identify areas on I-75 between Wildwood and the Florida/Georgia state line where roads can be expanded to alleviate traffic congestion, said Troy Roberts, communications specialist for FDOT.

With an FDOT I-75 project proposed,  Alachua County officials anticipate the replacement of the I-75 overpass on Southwest 20th Avenue, wrote Brian Singleton, contracts and design manager of Alachua County Public Works, in an email. The development cannot begin, however, until the I-75 expansion project concludes its research phase.

Because the I-75 project is still in the early stages of development, there is no scheduled start date for construction, and it could take more than five or 10 years to begin, Roberts said.

Southwest 20th Avenue is a highly traveled road that amasses an average of 17,500 commuters each day, according to the FDOT 2016 annual average daily traffic (AADT) report.

Frequent commuters from surrounding communities have expressed their concerns about the safety of the overpass, many noting the lack of sidewalks.

“I drive it every day, and I see people walking it every day, and it doesn’t seem to be the safest situation for walking along the road,” Megan Kimmel said. “It seems like it’s a major avenue for people to commute by foot.”

“I travel this road many times a week! There are bus stops but not sidewalks. How do they think the people get there?” Rhea wrote in a Facebook post. “Safety is important! Put in sidewalks!”

Singleton says the project will aim to construct a sidewalk as well as on-street bike lanes and streetlights. While not finalized, the cost is expected to be between $10 million and $13 million.

“Gainesville is continuing to grow, so obviously if there is anything that we can do to improve traffic and congestion for motorists and allow it to flow more freely, and it’s something we believe is feasible to do, then we will work toward that,” Roberts said.

While the logistics behind the overpass project are still pending, other road improvement measures on Southwest 8th Avenue have begun.

The plan will provide an alternate route to Newberry and Tower Road and has a budget of $12.6 million, Singleton said. The restoration began March 7 and is scheduled to take 30 months to complete, creating sidewalks, bike lanes, streetlights and on-street parking at the SW Advocacy Group Center (SWAG).

Residents along Southwest 8th Avenue and Southwest 61st Street will experience lane closures and detours throughout the duration of the construction; however, those closures will not impact the morning and evening rush hour traffic, he said.

Zindzi is a reporter for WUFT News who can be reached by calling 352-392-6397 or emailing news@wuft.org.
Previous Women’s Shooting League Builds Fellowship, Empowerment
Next March 28, 2018: Afternoon News in 90