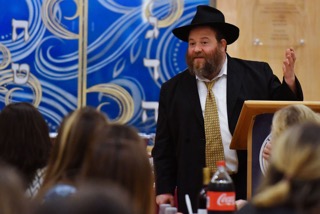 Rabbi Berl Goldman (pictured) and other members of Gainesville's Jewish community are preparing for white nationalist Richard Spencer's visit to the University of Florida, including by meeting with law enforcement. (Photo courtesy Berl Goldman)

For Rabbi Berl Goldman, preparations for white nationalist Richard Spencer’s visit to the University of Florida have been going on for a while.

Goldman, the rabbi at the Lubavitch-Chabad Jewish Student and Community Center in Gainesville, said that hundreds of students and parents have contacted him expressing their anger and fear regarding Spencer’s appearance, scheduled for Oct. 19.

“It’s not a matter of if we are going to be affected,” Goldman said. “We are affected. I believe all of humanity — decent people of all religions, races, colors, men, women and children — are affected by this.”

Goldman said he specifically has been in touch with the Gainesville and university police departments as well as federal law enforcement. He said UF and its president, Kent Fuchs, have also been proactive during the past few months in preparing.

Chabad has multiple cameras installed throughout its building to monitor activity on a daily basis. The center is putting in place additional security measures, but they are known only by members of the internal staff.

“We take this extremely seriously,” Goldman said, “because we know we are a target.”

Chabad is a safe haven for many students, and it will continue to be so throughout the event, Goldman said.

“We hope to overwhelm darkness with light,” Goldman said. “Each person can do something to counter this in the right way.”

Goldman said he prefers to not call Spencer by name, and he refers to Spencer’s organization, the National Policy Institute, as the “group coming to campus.”

When a man wearing a swastika was on campus in January, Goldman said he felt it was his responsibility to help students and faculty channel their feelings in a way that would not cause more harm.

Goldman said that, on the other hand, some will perceive not protesting as accepting the National Policy Institute’s messages.

Norman Goda, UF’s Norman and Irma Braman Chair in Holocaust Studies, described Spencer as an educated man who styles himself as a legitimate scholar and who does not act randomly.

“He claims that his conclusions are based on solid empirical research,” Goda said. “They’re not. It’s completely bogus scholarship.”

Goda said that it is unclear how many followers Spencer has, but he did attract a large number in August to the Charlottesville, Virginia, white nationalist rally, to which three deaths were linked. He said the amount of people who attended should be worrisome to Jews, minorities and anyone who believes in a pluralistic society.

He said he thinks Spencer is targeting certain universities because they have difficulty legally saying no.

“Not one of the student organizations wanted him here,” Goda said. “He had to resort to a legal loophole to get himself on campus.”

Goda said he thinks UF’s size and reputation gives Spencer a large platform on which to speak.

“He’s using our reputation and our seriousness to burnish his reputation so that he looks serious,” he said. “I don’t think we should allow him to do that, but we are a public institution.”

UF student AviChaim Snyder said that when he saw the man with the swastika on his jacket in UF’s Turlington Plaza in January, he snapped a photo, and the situation then gained traction in the media.

Regarding Spencer, Snyder said he was concerned when he heard people were trying to prevent him from speaking on campus.

Snyder plans to stay home during Spencer’s appearance. He said he thinks that protesters on both sides may end up causing violence.

“We have one of the largest Jewish populations in the country for a public school,” he said. “I don’t think this event will define us.”

Madeline is a reporter for WUFT News who can be reached at 301-768-8614 or mharlow@ufl.edu.
@@maddie_harlow
Previous UF Law Student Returns Home After Injury In Las Vegas Shooting
Next Gainesville Mostly Spared As Card Skimming Climbs In Florida