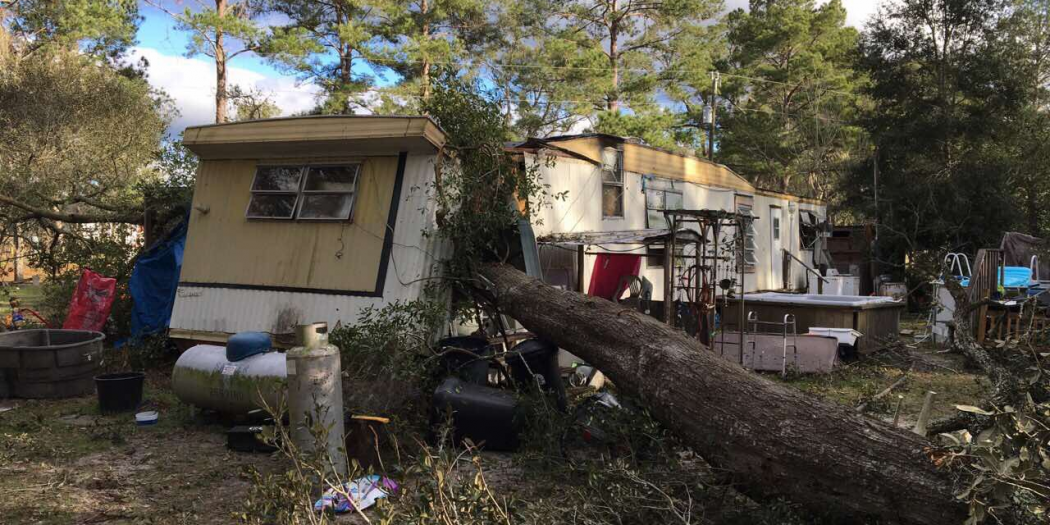 A tree split a home in half in the Lake City area. Photo courtesy of Columbia County Emergency Management.

The storm system that caused destruction across the Southeast also downed trees and power lines around Florida. In a statement, Tallahassee officials said electricity had been restored to over 23,000 customers by early Monday.

Forecasters said the storms hadn’t caused as much damage as Hurricane Hermine in September. Minor flooding was reported across Florida’s Panhandle, and areas of North Central Florida experienced wind gusts as high as 50 miles per hour and pea-sized hail.

A fatality was reported in Columbia County after a large tree split a home in half in the Lake City area near Interstate 10 and U.S. Highway 41.

In Alachua County, crews worked on power lines near I-75, and the Gainesville Police Department directed traffic at Clark Butler Blvd. and Windmeadows near Archer Road where signals were down.

The Hilton Garden Inn, 4075 SW 33rd Place, was left without power in Gainesville. The hotel’s guests were moved next door to Homewood Suites for the remainder of the storm.

Additionally, branches and debris littered the streets, and a tree fell on a house near the Campus Church of Christ on SW 2nd Ave.

No further major damage has been reported. However, the National Weather Service of Jacksonville has issued a wind advisory for Alachua County which will be in effect from 10 a.m. to 6 p.m. Monday evening.

The National Weather Service has reported Alachua County is no longer under a tornado watch.

#Alachua Co #Gainesville now in the clear of the severe weather this evening. pic.twitter.com/LeRYYyzqYN

The National Weather Service has issued a tornado watch for the surrounding counties until 8 p.m.

A tornado watch has been issued for parts of Alabama, Florida and Georgia until 8 PM EST pic.twitter.com/N4wnO8upbR

TORNADO WATCH for all of #NFla and parts of #FLPanhandle until 8 pm. Per @NWSSPC, this is a “particularly dangerous situation”. #flwx pic.twitter.com/JTSJiMLVlN

The National Weather Service in Tallahassee is warning there is a high risk of severe thunderstorms today across North Central Florida.

The threat for long-track tornadoes, damaging winds and hail is high, particularly in the afternoon. Storms are currently moving through South Central Georgia and into the Florida Panhandle. They will continue to develop over the Northern Gulf and move inland across the Florida Peninsula throughout the day.

The weather service is reporting this is rare and should be taken seriously.

This is rare and should be taken seriously. The @NWSSPC has placed North Florida under a “high risk” of severe t-storms today. #flwx pic.twitter.com/3JdEZAyDjJ

The Associated Press reported eleven people were killed and 23 were injured after severe weather struck southern Georgia on Saturday, according to officials.

Catherine Howden of the Georgia Emergency Management Agency said the deaths occurred in Cook, Brooks and Berrien counties in southern Georgia near the Georgia-Florida line.

She said the deaths were related to severe weather but could not specify whether tornadoes were the cause. Tornado warnings had been issued for parts of Georgia overnight.

Local officials are still assessing the area. No other information was immediately available.

The southeastern United States has been pounded by storms, high winds and unstable weather over the weekend. Four people died after a tornado with winds above 136 mph tore a 25-mile path across southern Mississippi before dawn Saturday.

This is a developing story compiled from staff and wire reports.  Check back for updates throughout the day.