By Ashlyn Reese and Joey Schatt

Three years ago Kylie Galloway Soto’s family noticed a lump in her neck.

What followed was a fight for her life.

Kylie, 9, was diagnosed with Hodgkin’s Lymphona, a form of cancer that attacks the lymphatic system and compromises the body’s ability to fight infection.

To make matters worse, Kylie has Lymphocyte Predominant Hodgkin Lymphoma, a rare form of the disease that only affects five percent of lymphoma patients. It tends to be in lymph nodes that can be more easily felt, rather than deep inside the body.

Kylie underwent surgery to remove the tumor and was declared cancer free.

Last December another lump began to grow rapidly. She was admitted into the hospital hasn’t been back to school since. She just completed her third round of chemotherapy.

If you passed by Idylwild Elementary School in Gainesville this morning, you may have thought it was spirit week. There was a DJ playing, students dancing, and an energy that lit up the courtyard.

In fact, the students were helping Kylie fight her battle against cancer.

Idylwild hosted a fun run this morning to raise money for her ongoing treatment.

Kylie’s grandmother, Deanna Nordstrom, said Kylie’s classmates and teachers have kept her at Idylwild in spirit through it all.

“They’ve sent Kylie cards, letters, blankets, prayers, calls. There’s rarely a day that someone doesn’t reach out, and she’s so happy that everyone cares about her and loves her,” said Nordstrom.

The school has sold “Team Kylie” T-shirts and bracelets that were donated by the Happy Hearts Foundation, and they’ve already raised more than $1,000.  First-grade teacher, Dena Robinson, came up with the idea of hosting today’s fun run: a noncompetitive run in support of charity.

“The kids look like they’re having a great time, and I’m glad that we were able to do it,” said Robinson. 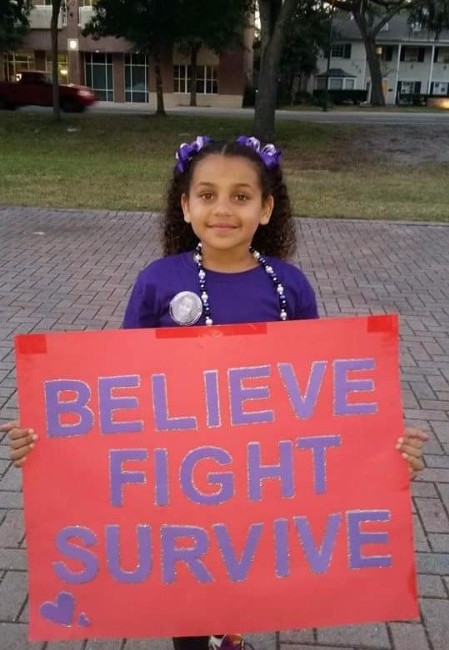 The event not only brought the school together as a community, but it also gave Kylie a chance to interact with her classmates; something she’s missed dearly.

“My favorite thing about today is just seeing everybody here,” said Kylie.

The school continued selling “Team Kylie” merchandise at the event to bring in more donations. Kylie’s family and family friends have two separate GoFundMe pages,  with a total of $1615 raised so far. Kylie also participates in other 5k fundraisers and hosts her own annual blood drive.

Kylie is scheduled for a PET scan next month to determine if the cancer is gone. If not, she will undergo more radiation and continue her fight.

Ashlyn is a reporter for WUFT News and can be contacted by calling 352-392-6397 or emailing news@wuft.org.
@AshlynReese_MMJ
Previous Gainesville Police Investigate Spike In Burglaries
Next Alachua County Libraries Are Expanding Programs To Meet Influx of Readers