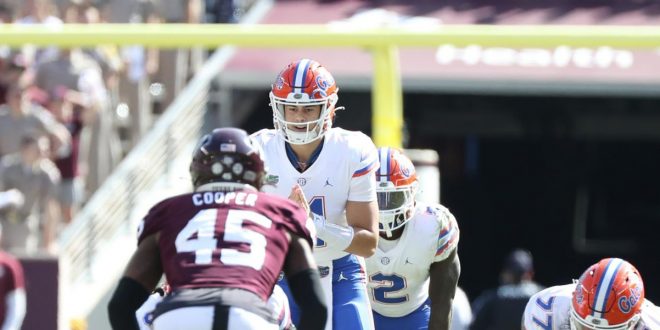 Florida Gators backup quarterback was released from jail on an $80,000 bond Thursday, hours after his first court appearance in a case involving five felony counts of possessing and distributing child pornography online.

According to newly disclosed court records, the case originated with a tip in June – months before the football season started – about an internet account ultimately traced to Jalen James Kitna, 19, of Burleson, Texas. Police said the account shared two images of what they described as underage, pubescent girls in graphic sexual positions.

It wasn’t immediately clear when University of Florida administrators or coaches were first aware that Kitna was a target in a criminal investigation. Gainesville police, who said they opened their investigation on July 8, arrested him Wednesday.

Disregarding his lawyer’s request to allow Kitna free without paying any bond, Alachua County Court Judge Meshon T. Rawls set Kitna’s bail amount at $80,000 and ordered the player not to use the internet and have no unsupervised contact with minors. If he were convicted on all charges, Kitna faces up to 45 years in prison and $35,000 in fines.

Kitna told police he had visited online chat rooms where child sexual abuse material was discussed and solicited, “but that he tries to shy away from it,” according to court records. He told police he was struggling with controlling his interests in child pornography and incest-related images. He said he prefers pornographic images close to his own age.

“He later clarified and advised that he doesn’t prefer anyone younger than 16,” according to court records. Police asked Kitna how he downloaded child pornography, and “he advised he might have accidentally clicked on a link he shouldn’t have,” court records said.

Kitna spent Wednesday night and much of Thursday in the Alachua County Jail – just days after making a brief appearance on the football field when starting quarterback Anthony Richardson was injured in Florida’s final game of a disappointing season, a loss to Florida State University.

His parents – including former NFL quarterback Jon Kitna – and pastor sat quietly in the courtroom. Appearing by video from the jail across town, Kitna was wearing a dark-green gown officials said signifies an inmate on suicide watch, not the county jail’s traditional green jumpsuit.

Kitna’s lawyer, Caleb Kenyon, said the images depicted pubescents and said it was difficult to tell whether they were 13 or 19. One image appeared to show one person kissing another on the cheek while gently cupping her breast, he said, suggesting that could be considered child erotica, which is not illegal.

Court documents described other images that were far more sexually graphic and were stamped “junior” as a warning that the teens in them were young. It wasn’t clear whether police knew the identities of the girls.

The court records also included chat transcripts that police said reflected Kitna and an unidentified internet user discussing pornographic images. At one point, one of them asked, “Are they under 18,” followed by “Bruh” and “Noooo.”

The State Attorney’s Office is expected to determine whether to formally file criminal charges – which ones and how many of them – against Kitna in coming weeks.

In court, Kenyon urged the judge to release Kitna without any bond because he said no one was directly victimized by Kitna’s alleged conduct.

“We’re talking about a crime that can be done with two clicks of a mouse,” Kenyon said.

Arguing that a high bond could be financially ruinous, he said Kitna had about $5,500 and lost unspecified income when the team suspended him this week. He did not address whether Kitna’s famous father, who played 15 seasons in the NFL, would be expected to help financially.

Defendants and their families who work with local bondsmen generally pay 10% of any bond and risk losing it if they fail to appear for future court hearings.

Bond amounts usually run between $10,000 and $20,000 per charge in such cases, according to a survey of the same specific criminal charges in the county. The judge set Kitna’s bond for the five charges collectively at $80,000.

On video, Kitna kept his head down for most of the hearing as four officers accompanied him in what appeared to be a jail holding room. He straightened when his parents testified in court. He lowered his head again and appeared to wipe his eyes after they spoke.

His parents, Jon and Jennifer Kitna, testified they would bring their son back to their Texas home and accompany him to any future court dates. They held hands throughout the 80-minute hearing.

Court officials recommended the judge prohibit Kitna from contacting minors or using computers or the internet. His lawyer requested that Kitna be allowed to contact minors with supervision, saying it would allow him to attend church and return home to his siblings, who are under 18. Kenyon also argued unsuccessfully that the player needed internet access to maintain his studies before final exams, which start next week.

The Gators said Wednesday they suspended Kitna from the team indefinitely. In a statement, the team said it was “shocked and saddened” over the case, adding that it had zero tolerance for such behavior.

Kitna was arrested Wednesday morning at his off-campus apartment complex in what witnesses said was a flurry of police activity. About eight police cruisers arrived in the parking lot about 7:40 a.m. and presented Kitna with a search warrant, said witnesses who spoke on condition of anonymity. They led Kitna away after about 30 minutes, and he was formally booked into the jail about 3:20 p.m.

Under Florida law, possessing at least three such images is considered “prima facia” evidence – meaning a judge would accept it as correct until proved otherwise – of intent to promote child pornography.

Like other social media platforms, Discord said its service automatically scans every image shared among its users and compares its characteristics against a comprehensive database of known child pornography. The system, known as PhotoDNA, alerts Discord’s trust and safety team to investigate. Confirmed cases are forwarded to the National Center for Missing and Exploited Children, which notifies local law enforcement agencies.

Gainesville police said in a statement it received a tip July 8 from the center, and Det. Donna Montague traced the online activity over Discord to Kitna’s apartment, which he shares with other Florida football players.

Police said the person online with whom Kitna shared the images has not been identified and was not being prosecuted because this person did not request illegal content and immediately expressed disapproval. Police said there was no reason to believe the person was a teammate or classmate.

Many details about the criminal investigation emerged more than 24 hours after Kitna’s arrest . In an unusual move, the sheriff’s office – which operates the county’s jail – declined Wednesday to share with journalists the underlying booking paperwork that it routinely provides in other cases. The booking records were made available before noon Thursday.

Sheriff’s officials took extra time to review the paperwork before releasing it publicly to censor sensitive details in the case because of the football player’s high profile and the nature of the charges, said Alachua County Sheriff’s Office spokeswoman Capt. Kaley Behl.

“They wanted an extra level of review,” Behl said. She said the booking records included details about the online sites Kitna visited and other information that might interfere with the investigation and thus could be withheld under Florida’s public records law. “They have the right to do that,” she said.

Kitna is studying public relations in UF’s College of Journalism and Communications.

Kitna, whose father played for the Cincinnati Bengals, Detroit Lions, Seattle Seahawks and Dallas Cowboys, played limited amounts in four games this season. He was expected to take a larger role on the team, depending on whether Richardson were drafted into the NFL before next season. He completed 10 of his 14 passes for 181 yards and rushed one time for six yards this season.

This story was produced by Fresh Take Florida, a news service of the University of Florida College of Journalism and Communications. The reporter can be reached at juliacoin@freshtakeflorida.com. You can donate to support our students here.

Julia is a reporter for WUFT News who can be reached by calling 352-392-6397 or emailing news@wuft.org.
Previous Gainesville police locate car involved in Monday’s fatal hit-and-run
Next Solar-powered trash cans are coming to Gainesville city streets