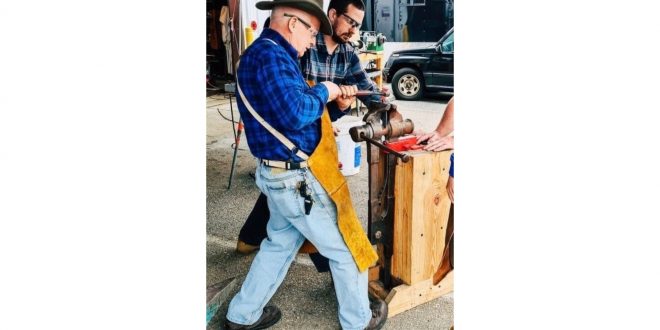 David Sandlin did not set out to be a blacksmith, and he certainly didn’t set out to be the president of the Florida Artist Blacksmith Association (FABA). Even so, he will be busy Nov. 4-6 overseeing the FABA Conference in Gainesville.

“I held my hand too close to the fire for a minute too long,” Sandlin said, jokingly referring to his brief and unopposed presidential campaign.

The conference will be held at the Best Western Gateway Grand Hotel and Conference Center. There will be classes and demonstrations throughout the day, with special events taking place in the evening.

Registration for all-day passes, special events and classes can be found online.

Sandlin, alongside his son, Christopher, owns and operates Traditions Workshop in Fort Walton Beach, Florida. While their business is more focused on furniture repair than blacksmithing, the sometimes centuries-old furniture that they have to work on requires materials that must be handmade.

Sandlin’s smithing experience began when, as a 16-year-old, he damaged the family car.

Sandlin gained more experience during his years in the military, as traveling around the world taught him new techniques in each location. He learned to work with stained glass in the United Kingdom, and to do woodworking in Germany, he said.

Christopher Sandlin, now the director of operations at Traditions Workshop and of the Far West region of FABA, began his career as a welder before coming back to join his father in business.

“You read the stories of something that happened in the past, and you have to sit there and go, ‘How did that work? How did they manage to make it function?’” Christopher said of blacksmithing.

He said that this mystery of the craft was one thing that drew him into smithing as a career, despite not having a singular moment of realization that it was what he wanted to do. Even with reference guides, the craft is so old that it is very difficult to determine how certain items were forged.

Christopher used the lance as an example of this phenomenon.

Jousting with lances went out of style centuries ago. But while the sport was prevalent, the crafting of lances was so commonplace that nobody bothered to write down the process.

Christopher is working on becoming a Journeyman Blacksmith, a term that denotes the highest professional standard for a field that was last officially recognized by the U.S Department of Labor in 1934.

The process of becoming a journeyman entails four years of work in the trade, as well as adherence to a set of 26 standards of safety and proficiency.

“It’s a license to learn; it doesn’t mean you know everything… There is something new to learn every day,” David Sandlin said of being a journeyman.

The Florida Artist Blacksmith Association was founded in 1985, when the craft seemed like it was beginning to die out, Sandlin said. While the meetings were not always referred to and marketed as conferences, the smiths from the different FABA regions have been gathering to learn from each other since the beginning of the association.

In addition to classes and demonstrations, the conference will also feature special events, one of which is the annual auction. Funds raised at the auction will go to support the different forges and smithies that are involved with FABA.

David Sandlin will be offering a tool chest inspired by a famous artifact in the world of blacksmithing.

The auction will be held immediately after the annual banquet, which will begin at 6:30 p.m. in the ballroom. The cost of admission for the banquet and auction is $30.

Another fundraising event is the weekend challenge. Although the challenge is usually a part of the conference, the winner’s reward takes on a new purpose for the first time this year.

When the winner of the weekend challenge is declared, he or she will get to pick the organization that will receive the proceeds. Suggested causes include museums and smithies that were affected by Hurricane Ian.

Beginning directly after the conference, smiths and apprentices in the Gainesville area will have a local smithy to call their regional home.

FABA is divided into regions, with each region having a forge, a blacksmith acting as the director, and a smithy to serve as the central meeting location. Regional directors also provide materials and teaching to blacksmiths in the area and arrange monthly meetings for FABA members.

Jordan Borstelmann, owner of Crooked Path Forge, will be the director of the new Gainesville region.

“Gainesville…has a lot of draw for artists in general,” Borstelmann said when asked about the choice to make Gainesville the central location. He also said that classes at his forge filled up quickly, and that many in the local area have shown interest.

Matt Shoemaker, a UF student and FABA conference volunteer, is one of those Gainesville residents.

He said that he enjoyed traveling to the more Eastern regions for FABA meetings because it allowed him to see friends from across the state, but that having a region here will be convenient.

After receiving a set of tools as a gift, Shoemaker taught himself for several years, before reuniting with FABA leadership and becoming a member. This will be his third time volunteering at a FABA Conference.

“My first time teaching blacksmithing was at Philmont Scout Ranch in 2021… It kinda helped not only me to get a better understanding of the material, but also spreading the knowledge, spreading the wealth, and getting (new) people involved, getting them behind a hammer and making some cool stuff,” Shoemaker said.

He will be teaching at this year’s conference, where attendees will be taught to make a spatula.

When asked why he thought blacksmithing ought to be “taught and preserved,” as FABA’s motto reads, Shoemaker said that even though most metalworking can be done very efficiently, those relatively new processes are all based on old techniques.

“I think that it also plays a vital role in our culture, not only through art but also through industry,” he said.

Pete Braspenninx of Michigan will be one of the featured smiths at the conference. His demonstration will feature 2 different metal sculptures. These pieces will demonstrate the way that old techniques can be applied to modern styles.

“I come at it from a little more of a fine art approach than a utilitarian, tool-making approach,” Braspenninx, whose background is in fine jewelry, said.

This will be his first time attending a FABA conference, but Braspenninx said it is fairly common for smiths to travel and share knowledge with each other. He looks forward to seeing alligators.

“Our community is pretty tight-knit, even around the country and around the world. So we travel and see each other a lot at conferences,” he said.

About blacksmithing as a whole, Braspenninx said that preservation and learning is made easier by the fact that smiths frequently share information — like tools, techniques and breakthroughs — with one another.

“We have the luxury of having a long legacy with blacksmithing — kind of a continuation of craft,” he said.

Joanna is a reporter for WUFT News who can be reached by calling 352-392-6397 or emailing news@wuft.org.
Previous The Point, Nov. 1, 2022: Your voter guide
Next UF selects Sasse as its next president; conservative U.S. senator pledges ‘political celibacy’