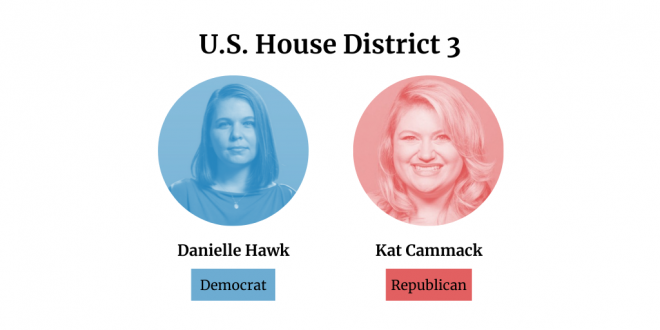 Democratic candidate Danielle Hawk is challenging Republican incumbent U.S. Rep. Kat Cammack for Florida’s 3rd Congressional District. Here is what voters need to know about them as they prepare for Election Day on November 8.

WUFT spoke to Danielle Hawk about her campaign but was unable to hear from Cammack or her campaign despite multiple attempts to do so by email and phone because of scheduling conflicts. Cammack’s campaign did not respond to a request to answer questions over email as an alternative.

Cammack is the current representative for Florida’s 3rd Congressional District, having been elected for the first time in 2020. Prior to being elected, she served as deputy chief of staff to her predecessor, Rep. Ted Yoho, from 2013 until 2019.

As WUFT has previously reported, Yoho said in a 2020 statement that Cammack was “demoted” in 2013 as his chief of staff and “reassigned” from Washington to a Florida district office for “reasons not to be disclosed.” The statement was later deleted from Yoho’s campaign Facebook account.

She is originally from Colorado, where she was raised on a cattle ranch. Cammack said her family lost the ranch because of the Obama administration’s Home Affordable Modification Program in 2011, leading to her involvement in politics and opposition to government overreach, which remains one of her main platforms.

Cammack is the second-youngest woman in Congress and serves on the Homeland Security and Agriculture committees. She serves as the ranking member for Homeland’s subcommittee for Emergency Preparedness, Response, and Recovery, which includes hurricane response.

The incumbent, along with Florida’s other 15 Republican congressional representatives, recently came under fire for voting against a bill for more federal aid relief funds in the aftermath of Hurricane Ian. The relief bill was part of a larger spending bill that included funding for the war in Ukraine, of which many Republicans criticize the United States’ level of involvement.

Cammack has sponsored a collection of 14 bills, resolutions and amendments while in office, none of which have passed the House, according to congress.gov.

Some of these include a bill to give the Secretary of Homeland Security the authority to contain migration surges, a bill to amend the Natural Gas Act to expedite approval of exports of small volumes of natural gas and a bill to amend Chapter 8 of Title 5 of the United States Code to provide that major rules of the executive branch shall have no force or effect unless a joint resolution of congressional approval is enacted into law.

Cammack’s recent votes include voting to pass the Fairness for 9/11 Families Act and voting against the Affordable Insulin Now Act.

Cammack is an avid supporter of former President Donald Trump and in her first week in the House objected to Congress’ certification of the 2020 presidential election’s electoral votes on Jan. 6 and voted against creating an independent commission to investigate the Jan. 6 attack on the Capitol.

Danielle Hawk is a community activist originally from Pennsylvania. Hawk has spent her life volunteering at organizations working toward various social causes, particularly regarding child poverty and educational opportunities, in Florida, Pennsylvania and Central America.

While Hawk values the volunteer work she has done, she said volunteering is only a temporary and insufficient solution to larger and persistent national issues which need to be addressed by the nation’s leadership.

“All of those things were just a bandaid to the systemic issues that we were having, and that we have in our country. And clearly, they’re not getting fixed. And I am tired of being represented by career politicians who do not have the political will to get these things done because they don’t affect them,” Hawk said. “And in order for all of those, all of the things that I was doing in my community, I saw what the consequences were and decided that I wanted to fix it.”

Hawk has been very active in organizing protests in Gainesville, including the North Central Florida March for Reproductive Freedom and Justice following the overturning of Roe v. Wade by the Supreme Court. Hawk said restoring a woman’s right to receive an abortion is her top priority should she become elected.

Hawk has had no experience in government compared to Cammack’s decade-long experience in Washington. Hawk said this is one of her strengths.

Hawk said there is no more relevant experience than being an everyday American.

“I just have normal people experience. I just have the regular American experience that many of these people who have been sitting in Congress for decades and decades, they can’t even comprehend what it’s like anymore to just live life as an American,” Hawk said.

Hawk and Cammack fall into common Democratic and Republican ideology.

Hawk’s primary issues, besides her top priority of restoring a woman’s right to an abortion, is abolishing child poverty, expanding pre-K in public schools and reducing gun violence.

Hawk said she aims to reduce child poverty by re-implementing the temporary child tax credit put in place during the COVID-19 pandemic, which Hawk said cut child poverty in the United States by 40%. Hawk has criticized Cammack for voting against making the tax credit permanent.

Hawk said she aims to reduce gun violence by eliminating background check loopholes for every gun sale and transfer, which she says has the support of 84% of Americans.

Cammack is a vocal opponent of abortion and gun control, and previously voted against making the pandemic-era child tax credit permanent.

Cammack won office on a conservative platform of growing jobs, securing our southern border, standing up for law enforcement, defending our Second Amendment, promoting fiscal responsibility, and defending life, according to her campaign website.

Hawk’s largest source of funds is ActBlue, an online Massachusetts-based platform widely used for fundraising from small-dollar donors by Democratic candidates across the country, from which she received $5,126. Hawk’s largest single donation is from Kevin Rowe of California-based K Rowe Investments L.L.C. who contributed $2,900.

Hawk said that the fundraising gap had always been anticipated by her campaign.

“That’s just the way that it is when you are willing to take money from literally anybody. And I’m not willing to take money from just anybody. She takes money from gun lobbyists, from phosphate mining companies, from people who are actively working against the things that we need here,” Hawk said. “And her votes show you that that’s who is important to her. I don’t have millionaires in my pocket, because that’s not who I’m prioritizing. And that’s not who I work for.”

Cammack won 57% of the vote in 2020. Republicans have held the 3rd District since Yoho’s election in 2013. Democrats are expected to lose the House of Representatives to Republicans, following the trend that the party of a sitting president loses seats. President Biden has long been criticized for rising inflation across the country.

Christensen in 2020 won reliably Democratic Alachua County with 86,857 votes compared to Cammack’s 52,914. Cammack won the other five counties included in the district. This election is the first since the district’s redistricting that occurred after the 2020 census. Whoever wins the election will represent the redrawn district.

Danielle Hawk is looking toward the future with optimism.

Despite long-standing gridlock in Congress, Hawk said she believes both political parties can still come together to pass legislation that genuinely benefits the average American citizen.

“They were able to find common ground and work together in order to save lives,” Hawk said. “So it is possible, but people like my opponent will continuously vote against bipartisan common-sense legislation, because their special interest donors are telling them to.”

Cammack voted against the bill.

Silas is a reporter for WUFT News who can be reached by calling 352-392-6397 or emailing news@wuft.org.
Previous 2022 midterm elections: U.S. House races
Next Race to the bench: Sean Brewer and AuBroncee Martin go head-to-head for open 8th Circuit judge slot