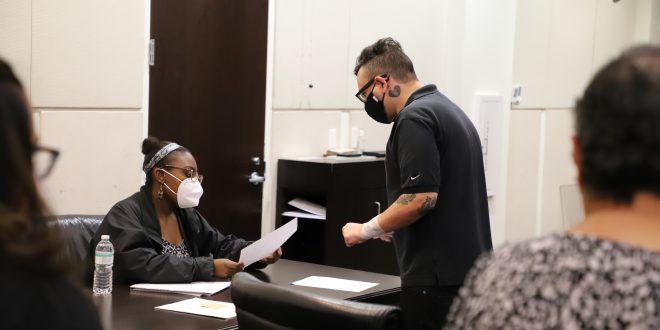 At the end of the court hearing on Monday, Joshua Figueroa signed documents accepting the pre-sentence investigation. Judge Phillip Pena said he hopes the investigation can be completed in two weeks, although that is sooner than typical. (Katie Delk/WUFT News)

A judge on Monday rejected a plea deal in the criminal case stemming from a University of Florida student’s 2020 hit-and-run death in Gainesville.

Around 100 people, 60 in an Alachua County courtroom and 40 on Zoom, gathered to learn defendant Joshua Figueroa’s fate. Figueroa’s defense attorney, Robert Rush, said Figueroa was accepting responsibility for Maggie Paxton’s death and the hit-and-run that caused it. Rush presented the outcome of a plea negotiation between the defense and state attorney’s office for the minimum mandatory sentence of four years and 10 years of felony probation.

However, Circuit Judge Phillip Pena said: “This does not appear to be a minimum case.”

Instead, Pena ordered a two-week pre-sentence investigation on Figueroa. The court will reconvene on April 20 to resolve the case.

“This is somewhat a little bit atypical, but I have a host of people on both sides that are hopeful and wanting to come to some closure and some resolution to the matter at hand,” he said. “From the court’s perspective, I have to get to a point where I believe that the resolution is just based on all of the facts and circumstances.”

On Dec. 10, 2020, at 1:40 a.m., James Paxton heard loud knocks on his door. When he answered, he saw two Jacksonville sheriff’s officers with solemn expressions. They asked to speak to Lisa Paxton, Maggie’s next of kin.

At the court hearing on Monday, he said his heart sank at that moment. It was a nightmare, he said. When Lisa Paxton found out moments later that her daughter had died along University Avenue, she crumbled.

Their younger daughter, Holly, awoke to gut-wrenching screams. She walked out of her room. Her mother was laying on the floor. James Paxton cradled her, arms enveloping his wife.

“I couldn’t breathe, think, or move. I was paralyzed. I was in denial and shock,” Holly said at the courthouse in between sobs. “My sister was dead. How can this be?”

The four people who were closest to Maggie Paxton during her life, including lifelong friend Kylie Borg, spoke on lasting trauma in their victim impact statements. Many nights, images of their daughter bleeding on the streets ravage James and Lisa’s sleep, the parents said. Holly Paxton sometimes feels physically ill and is too overwhelmed to enter her room, a space she and her sister shared.

As they spoke, Joshua Figueroa, 31, who was charged with leaving the scene of the accident involving a death, leaned back in his chair and gazed at the ceiling. Paxton’s family members called Figueroa a coward.

“He chose to run, hide and lie for seven months to conceal his felony,” James Paxton said.

“For those in his inner circle, you know who you are,” she said turning to and pointing at Joshua’s father Miguel Figueroa and mother Ivonne Vasquez. “To be complicit with this cowardly and illegal action is equally inexcusable.”

The couple remained silent. Neither responded to a cell phone call for an interview.

The facts of the case

Authorities tracked Figueroa’s car using images from automated license plate readers, according to police reports. When detectives found it in the local auto repair shop that the Figueroas own, it was marked with Maggie’s blood, damaged on the right side, and faded. But it was wedged between other cars, police files said. When investigators asked Miguel Figueroa to see the car on Dec. 15, 2020, he refused.

On Dec. 17, 2020, investigators returned with a search warrant and discovered Joshua Figueroa’s stashed papers in the car. And after inspection of Joshua’s phone records, received on Feb. 5, 2021, police saw he was in the area of the crash as it happened. Fifteen minutes after the accident, he called a friend, Marc Painton. Police interviewed Painton on June 29, 2021, four months after uncovering the phone records. Two days later, they arrested Joshua. He pled not guilty after he was arrested and was held in jail for two days.

After seven months, Figueroa on Monday changed his plea from not guilty to no contest.

Deborah Rothenberg, the prosecutor, initially called the plea deal appropriate. The 10-year probation, she said, is not part of any mandatory sentence. However, the Paxton family asked for it, and she said the defense agreed to it.

“I think for somebody with no criminal history, it’s kind of the defendant’s chance to prove is this somebody who is a decent person who made a bad choice that ultimately resulted in the loss of an amazing young life, or is it somebody who has gotten away with a lot in their life and happened to get caught this time?” Rothenberg said. “And I think ultimately with 10 years of probation, he’ll be able to prove to this court and this community and everybody in this room, what kind of person he is.”

The felony followed eight citations for Figueroa, including for speeding, careless driving and a crash on June 24, 2012, court records show.

After Rush announced the plea deal and Rothenberg responded, she discussed it further with the Paxton family. When the family returned to the courtroom, Pena said the court had difficulty accepting the negotiation.

At the conclusion of Monday’s proceeding, Pena rejected the deal.

The friends and family in attendance

Several of the court attendees included Kappa Kappa Gamma sisters, a sorority of which Maggie was a member.

Others attended Fletcher High School with Maggie in Neptune Beach.

Both went to high school with Maggie and got tattoos of “sexy” in Maggie’s handwriting a few days after the accident. They collected her lettering from her old homework notes, a testament to James’s comment that Maggie stayed up all hours of the night to assist friends with school. They said she always finished assignments a week in advance. She was also a “hype man,” Booker said. She blasted the song “Sexy” by JoeVille and told them they were sexy and could do anything.

Booker played lacrosse with Maggie and worked with her at RP’s Fine Food & Drink, where she saw Holly working recently.

“It was a huge loss because she connected to all of us no matter who you were, all of the dishwashers, all the kitchen guys, hostesses, all of us,” Booker said.

The pair said they would return on April 20.

Jack McKinney, 20, a UF acting student, also went to high school with Maggie. After the accident, he helped form the group Not One More to advocate for changes to University Avenue. He said he believes Joshua showed indignation at the hearing, which contributed to the denial of his change of plea.

“When the family were giving their impact statements, it was some of the most impactful words I’ve ever heard and he was slouching in his chair, showing no remorse,” McKinney said. “I think the judge picked up on that. And I think that’s part of the reason why this is gonna last another two weeks because he deserves a longer sentence.”

Darry Lloyd, the chief investigator with the Office of the State Attorney, said the family and friends who attended sought closure.

“They’re seeking justice, and I’m not sure any matter of our time will give them that justice. But they want to make sure that they are present there to see the person that’s been accused of killing their loved one is held accountable,” Lloyd said. “ I believe we’ll see the same thing April 20.”

Katie is a reporter for WUFT News who can be reached by calling 352-392-6397 or emailing news@wuft.org.
Previous Florida Gov. Ron DeSantis signs ‘Don’t Say Gay’ bill
Next The Lede || Season V Episode II: One with nature