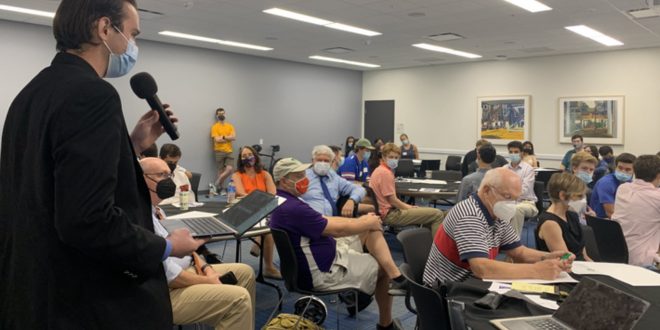 Mark Merwitzer, Florida Not One More President, addresses the group in person and on Zoom. (Isabella Leandri/WUFT News)

Gainesville city officials, concerned citizens and University of Florida students all gathered around tables in one room to discuss the reality of pedestrian safety on and around UF’s campus and the wider Alachua County area.

Florida Not One More on Saturday held a Pedestrian Safety Roundtable for citizens and city officials to talk about their expectations and plans for the future of University Avenue.

Over 50 individuals attended the event at the Reitz Union in person and another 25 participated virtually via Zoom.

The Florida Not One More student-led advocacy group was started at the University of Florida in January following the pedestrian deaths of UF students Maggie Paxton and Sophia Lambert.

The president of Florida Not One More, Mark Merwitzer, described the event as friends in a room trying to solve a problem.

“We are all coming together because we have a fundamentally shared belief that we must shatter the status quo of University Avenue,” Merwitzer said.

Elisabeth Staten, vice president of community organization for Florida Not One More, created the meeting with Merwitzer to make community engagement meetings accessible to all.

“Let’s pick a Saturday where there’s not a home game and let’s try to get as many people here as we can to talk to our local officials and see what people do want on the future of University Avenue and what the current concerns are and safety fears are,” Staten said.

Poe addressed the group on Vision Zero, which is a strategy that calls for zero deaths or serious injuries on any roads and prioritizes road safety for every user. It incorporates education, enforcement, engineering and technology.

Poe said citizens must be completely inclusive in their advocacy and take it everywhere and not just in the corridors directly outside of UF.

Michael Escalante spoke on behalf of the Metropolitan Transportation Planning Organization for the Gainesville Urbanized Area. Escalante said the purpose of the MTPO was to enable local input for the expenditure of federal transportation dollars.

Linda Dixon, the director of planning for UF, presented the university’s bicycle and pedestrian safety update. The update included high visibility and special traffic enforcement from UFPD on and around the university’s campus, focusing on University Avenue. Some engineering aspects have been completed, including special emphasis on crosswalks, tree trimming for light and visibility, temporary speed tables at four locations, new safety signage and reducing the speed limit on University Avenue to 25 mph.

“If you are a top-five university, you want parents and families to think you have top-five safety,” Charlie Lane, UF senior vice president and chief operating officer, said.

Posterboards were given to each table for attendees to write their specific asks and plans for traffic and pedestrian safety which will be mailed to the Florida Department of Transportation.

At the end of the meeting, citizens were able to comment and speak their concerns.

Emily Hind, a professor at the university, rides her bike to and from work each day. She said the speed limit on University Avenue should be lowered from 25 to 20 mph and that the temporary speed tables should remain permanent.

“I’m terrified I’m going to get killed,” Hind said. “It is so terribly uncomfortable.”

Jack McKinney, vice president of student organization affairs for Florida Not One More, urged the city to speed up their redesign plans.

The first draft of the University Avenue and 13th Street redesign is planned to come before the city commission on Oct. 21.

Elisabeth Staten, Florida Not One More VP of Community Organization, speaks on her passion for transportation planning and her ideas behind the roundtable event, as well as how she felt about its outcome. (Isabella Leandri/WUFT News)

Isabella is a reporter for WUFT News who can be reached by calling 352-392-6397 or emailing news@wuft.org.
Previous To understand how to save more birds, these Florida volunteers are collecting thousands of dead ones
Next Judge refuses to reconsider Florida mask ruling