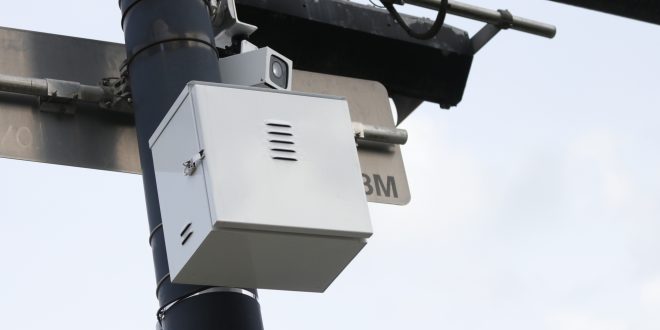 Four license plate recognition cameras have been installed at the intersection of Waldo Road and Eighth Avenue in northeast Gainesville. (Kalia Richardson/WUFT News)

Three of the largest law-enforcement agencies in Alachua County have installed license plate recognition cameras to help them better respond to vehicle-related accidents and crimes.

The Gainesville and University of Florida police departments and the Alachua County Sheriff’s Office say the cameras – known as LPRs – are used to determine “vehicles of interest.”

But the LPRs are also used for Amber and Silver Alerts – involving missing children and senior citizens, respectively – as well as crash and hit-and-run investigations, stolen vehicles, etc.

An LPR was used to identify the BMW involved in the incident in which University of Florida freshman Maggie Paxton was killed on University Avenue in December.

“It’s giving us information where there wouldn’t otherwise be eyes on the ground,” GPD public information officer Graham Glover said.

Thanks to $140,000 in federal grant money received last year, GPD installed a LPR at each of the four local exits off U.S. Highway 75, and four more at Waldo Road and Eighth Avenue in northeast Gainesville. The cameras are in heavily populated and high crime areas, Glover said.

UF spent $1.3 million to add 61 LPRs at 16 campus entry points last fall, Joseph Souza, the university’s physical security director, wrote in an email. They include spots on Archer Road, University Avenue and Southwest 13th Street, Southwest 16th Avenue and Southwest 34th Street. UF anticipates adding 40 cameras at 15 more locations in the fall, wrote Souza, who added that the additional cost is as of yet undetermined but could be about $700,000.

The sheriff’s office has four LPRs deployed across its jurisdiction as needed, according to a spokesperson, Lt. Kaley Behl.

LPRs scan tags 24/7 and are used in real time or during investigations, Glover said.

Above: Listen to our daily podcast, The Point, for a discussion with the reporter who wrote this story.

When a camera recognizes an Amber Alert, for example, GPD is notified. Next, an officer verifies that the tag is correct and decides whether to pursue the vehicle or disregard an incorrect image. GPD does not use the technology to give speeding tickets, Glover said, adding that the data is stored for a year, shared within a national database and used for police purposes only.

While GPD and some Gainesville residents look positively to the installation, others have raised concerns about 24/7 surveillance and possible racial targeting.

Chad Marlow, a senior advocacy and policy counsel with the American Civil Liberties Union, said that surveillance technology like LPRs is often deployed in marginalized communities.

“If it turns out that this is just a technological way to even further extend the over policing of communities of color, you have a problem,” said Marlow, who is based in New York.

Then-City Commissioner Gigi Simmons, who represented East Gainesville and downtown, raised initial concerns about the location of the cameras, in a January general policy meeting.

“There may be some unintended consequences behind this,” said Simmons, who was defeated in her bid for reelection in March. “I don’t think that’s a great approach.”

Stolen vehicles and hit-and-run accidents occur predominantly within the east, according to Gainesville’s open data portal DataGNV. Policing has historically focused on communities of color, Marlow said, explaining the higher rates of crime within those demographic regions.

The federal grant money could have been directed toward preventive measures like recreational activities, after-school care and job programs rather than spying on and jailing people, he said.

“You create an environment in which small infractions, which would go completely unnoticed in whiter and wealthier communities, are going to lead to police interventions in communities of color,” Marlow said.

Boisy Waiters, the community engagement and diversity outreach coordinator in the UF College of Veterinary Medicine, said surveillance technology like LPRs and body cameras worn by police officers can be beneficial if used properly.

“If you’re targeting people because they drive a certain type of car, or you suspect them or something, then I think that’s not necessarily the proper way,” Waiters said.

Waiters said, however, that he wants to see how LPRs work before GPD decides to buy more.

Marlow said storing the data for extended periods of time allows the authorities to keep a record of doctor’s appointments and what political meetings, and religious institutions someone attends.

Calling it an undue invasion of privacy, he asked, “Where is the assumption that every person in Gainesville needs to be surveilled as if they were a potential criminal?”

Norbert W. Dunkel interacted often with UFPD before retiring as the university’s associate vice president and chief operating officer for student affairs. He said he heard about LPRs when UF was looking to increase security at its college football and basketball games.

“If you can acquire that level of additional security, particularly through a grant, I think it’s worthwhile,” Dunkel said.

While Dunkel said he leaves his car locked and in the garage in his Hidden Pines neighborhood in Gainesville, the cameras will bring investigators one step closer to resolving a crime.

“I think it’s something as citizens we need to support,” he said. “It’s not intrusive at all.”

Glover said GPD has been transparent with body worn cameras and will do so with LPRs.

Marlow said he wasn’t so sure. “Police love free toys,” he said. “Just because they’re free doesn’t mean there’s not a cost to owning them.”

Kalia is a reporter for WUFT News who can be reached by calling 352-392-6397 or emailing news@wuft.org.
Previous Gainesville’s Residential Water Usage Two-Thirds Of What It Was 25 Years Ago, Despite Population Growth
Next Ocala Woman Speaks Out Against Domestic Violence