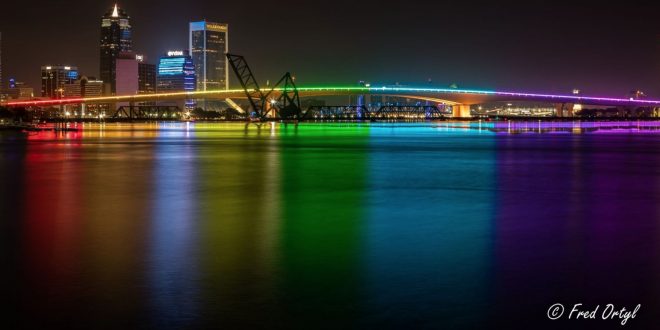 Distancing himself from a controversial order from the state Transportation Department to turn off a Pride Month light display on a Jacksonville bridge, Gov. Ron DeSantis said he isn’t personally involved in such decisions.

“I’m not involved in bridge lighting,” he said last week.

There is evidence that contradicts the governor: In 2019, a Republican former business executive asked DeSantis to consider pink lights for Tampa Bay’s Sunshine Skyway, in honor of breast cancer awareness month.

Janet Cook, the former president of Estee Lauder North America, said the governor’s office directed her to reach out to FDOT with its blessing and separately sent a message to a maintenance engineer in the Transportation Department to follow-up on Cook’s request.

The incident in Tampa was confirmed in an interview this week with Cook and was originally reported in 2019 by the Tampa Bay Times.

That example doesn’t dispute the governor’s statement that he was not involved in the Jacksonville decision, which was widely regarded as the latest sleight by his administration against the LGBTQ community in Florida. Yet it fueled suspicions – voiced so far without evidence – that the department moved against the Pride Month display in ways the governor’s politics would have favored.

The governor’s office, Florida Transportation Department and Jacksonville Transportation Authority have not yet fully responded to public records requests to release internal records, including emails, that would lay out what happened behind the scenes during last week’s bridge decision.

So far, the official explanation offered was this: The Transportation Department received five phone complaints, then ordered the Jacksonville Transportation Authority to take down the display, citing permit violations. After criticism, the rainbow lights returned the next day, as “it is obviously a matter of broad community interest,” the department said.

The incident highlighted the deep divisions in Florida between DeSantis, an ardent conservative who’s increasingly tackled social and cultural issues, and the state’s LGBTQ community, which as a voting bloc skews heavily Democratic.

On June 1, the governor signed the “Fairness in Women’s Sports Act,” which restricts young transgender women from playing on women’s sports teams. The next day, DeSantis vetoed $1.5 billion in line-items from the state budget, including $1 million set aside for two Orlando LGBTQ organizations. Following the bridge lighting controversy, his administration said it wasn’t singling out the LGBTQ community.

The governor is a leader for all Floridians, spokesperson Christina Pushaw said, and that includes the LGBTQ community. “Framing his actions to benefit the entire state, as though they’re attacks on a specific group, is a baseless political narrative.”

Cook said she believed the governor decided to help her because he is a family man. She said she made another request to turn a bridge blue for Earth Month, but it was denied.

When it comes to the trans athlete bill, the governor’s office said it is anti-discriminatory toward cisgender women. The governor, Pushaw said, doesn’t want women and girls to lose opportunities for recognition “because they’re competing against biological males who they have no chance to compete against.”

Pushaw acknowledged that complaints about this are rare in Florida but said DeSantis wants to prevent it from happening here the way it happened to the young Connecticut athlete, Selina Soule.

Soule, who spoke at the press conference for the bill signing, said that allowing trans women to compete caused her to lose opportunities in high school track competitions.

Pushaw said Desantis didn’t sign the bill on June 1 – the first day of Pride Month – to send a message. “It was because it was the first day [Soule] could join us.” Her lawyer confirmed there were scheduling conflicts earlier.

To Jon Harris Maurer, the public policy director of Equality Florida, the timing made no difference. This is the first explicitly anti-LGBTQ law passed in Florida in 24 years, he said, and DeSantis did not meet with trans youth before signing it. Muerer said one woman from Connecticut shouldn’t make this a legislative priority in Florida.

Democratic state Rep. Carlos G. Smith said the bill was cruel and unnecessary, and there was an opportunity cost in time spent debating it.

Smith is the state’s first Latino and openly LGBTQ representative and serves east Orlando. He has championed progressive causes, especially ones that affect the LGBTQ community. In the time spent on the trans athlete ban, Smith said lawmakers could have focused more on important policy issues like affordable housing and lowering private insurance rates.

“By banning trans girls from competing on girls teams, they are taking away opportunities from trans girls to be part of a team, to be able to learn from their peers, to feel included.”

Orlando resident Joél Morales said that in 2019, DeSantis visited the Pulse Night Club Memorial and promised the crowd he would always support survivors. On a message board at the ceremony, the governor wrote, “Florida will always remember these precious lives.”

As a gay Puerto Rican man, Morales was deeply impacted by the largest attack on LGBTQ in the history of the country. Of the 49 lives lost on June 12, 2016, 90% were Latinx and more than half were Puerto Rican. An anti-terrorism grant helped the community estbalish crisis and trauma centers, including the city’s LGBTQ Center. Morales works there at the Orlando United Assistance Center, where he’s been helping since Day One.

DeSantis’ vetoes amounted to $1.5 billion, with the lines for the Orlando organizations making up only .06% of the cuts. Pushaw said there will still be a $212 million increase in funding towards community-based mental health service, for a total of over $1 billion.

“That funding that was requested as an earmark this year was new, not something that was part of the organization’s operating budget in previous years and then removed,” she said.

The budget also includes funding for safe affordable housing and homelessness crisis prevention. LGBTQ organizations, along with any other in the state, may apply through those channels, Pushaw said. The Zebra Coalition could find funding through the Department of Children and Families.

“If you see a headline that says DeSantis vetoes funding for Pulse survivors, it’s just a gut punch emotionally,” Pushaw said.  “So I understand … why it’s been used to portray him as some, you know, terrible homophobic person, but that’s not the case.”

Smith said that the suggestion that general funding for mental healthcare was sufficient is “an extremely callous attitude to take towards an extremely vulnerable group of people.” Pulse survivors need culturally competent care, he said.

There’s no guarantee that the organizations will be approved for the funding, Smith said. DCF made news in 2016 for rolling back protections for LGBTQ youth in foster care. They reinstated them after lobbying from LGBTQ groups like Equality Florida. Smith said having to apply is just another bureaucratic hurdle.

As far as the Acosta Bridge controversy, the Democrat said that for anyone who doesn’t believe DeSantis was involved, “I’ve got a bridge to sell you.” FDOT answers to DeSantis, he said.

For now, the trust has been broken. The LGBTQ Center will attempt to raise money from the community to extend its services and hire more mental health counselors. Fred and Maria Wright, parents of one of the 49, pledged $25,000 in a campaign to raise money for the center.

Morales believes they will reach their goal, because he doesn’t want to think about the alternative. He believes the governor can still help, if he’s willing to talk and have conversations.

This story was produced by Fresh Take Florida, a news service of the University of Florida College of Journalism and Communications. The reporter can be reached at avaloomar@ufl.edu.

Ava is a reporter for WUFT News who can be reached by calling 352-392-6397 or emailing news@wuft.org.
Previous The Point, June 18, 2021: A Syrian Asylum Seeker Has Spent Nearly A Decade In Gainesville, Waiting In Limbo
Next Gainesville 4 All Announces Plans For Innovative Family Learning Center