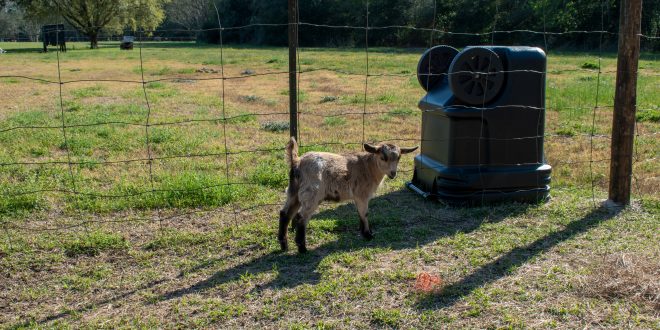 This is the goat that fell into a sinkhole in High Springs on Monday afternoon. (Santiago Chacin/WUFT News)

A nine-week-old goat fell into a sinkhole over 40 feet deep in High Springs on Monday afternoon.

Both High Springs Fire Department and Alachua County Fire Rescue were dispatched to the scene.

Jason King, the owner of the goat, is unsure how the animal fell into the sinkhole. He thinks the baby may have been nibbling on a grass root too near to the edge and lost balance.

At around 4:51 p.m., King was washing the walls of his house outdoors when he heard the stress cry of the goat mother. He proceeded to call 911 for animal rescue.

Upon arrival, firefighters worked to develop a rescue plan that would ensure the safety of the animal and themselves.

While this was happening, the goat mother was running around in distress, according to King.

After about two hours, High Springs Fire Department Lieutenant Kevin Pearson descended into the hole to rescue the goat.

Eleven minutes later, the baby goat was safely pulled out of the sinkhole and reunited with its mother, uninjured.

Speaking of the rescue, King was astonished by the work of the firefighters.

“It was beyond what I imagined,” King said. “They got right down to it and were able to pull the baby back up.”

“While we never want to get these types of calls, the timing of Monday’s event was perfect,” High Springs spokesperson Kevin Mangan said.

According to Mangan, the firefighters from both agencies are in a weeklong rescue class being held in High Springs.

“Calls like these are the exact reason our crews spend countless hours together every year, training, learning and adapting,” Mangan said.

Santiago Chacin is a general assignment reporter for WUFT. He can be reached at news@wuft.org or (352)294-6397
Previous As COVID-19 Cases Decrease In Alachua County, Vaccination Rates Climb
Next The Point, March 10, 2021: The Good News About Coronavirus Numbers In Alachua County