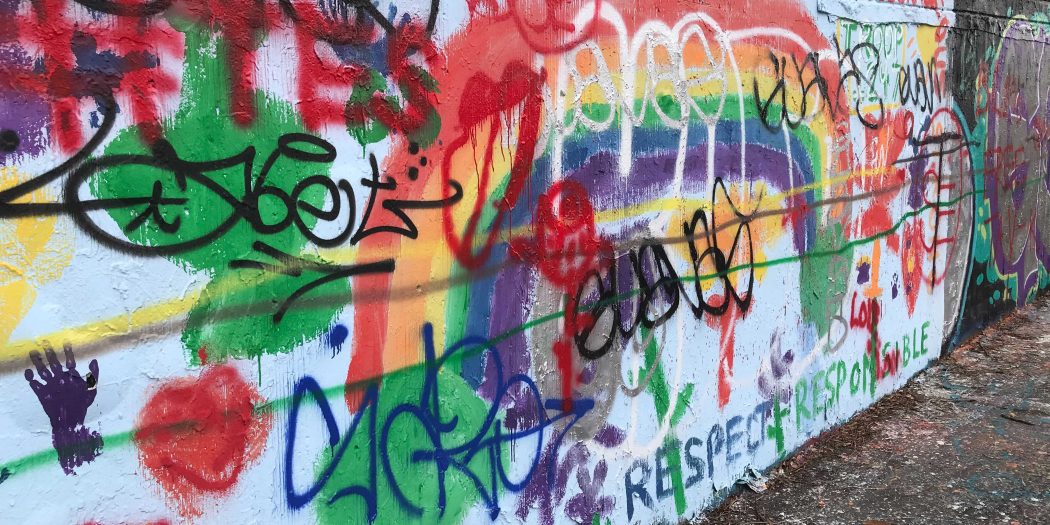 After a graffiti surge in 2012, the city of Gainesville launched graffiti abatement programs that, nearly a decade later, appear to have succeeded, even as the line between graffiti and art begins to blur.

The purpose of the graffiti abatement program is to remove graffiti as quickly as possible. Gina Hawkins, executive director of Keep Alachua County Beautiful, said removing graffiti and blight quickly decreases the chance of similar crime spreading. It reduces the impact of other criminals seeing the graffiti and being motivated to do the same.

According to the Bureau of Justice Statistics, graffiti is the most common type of vandalism, accounting for 35% of all reported acts. Additionally, almost 90% of graffiti is done by people with no affiliation to gangs.

In 2018, Keep Alachua County Beautiful received a $5,000 grant to help combat graffiti removal. These funds helped them afford the equipment and materials to remove the paint from various surfaces. These materials can be anything from brushes, paint, primer, and specialized pressure washers, depending on where the paint needs removing.

Graffiti removal is not always as simple as painting over words. If you do not lift the masonry before repairing the graffiti, the paint can either remain on the surface or seep into the masonry further. The masonry paint remover used to carefully remove the paint can cost $60-$70 per gallon.

But not all paint is destined for removal.

The Southwest 34th Street wall is an example of graffiti being done in a way that’s less costly.

“We support the expression on 34th Street wall,” Hawkins said. “It’s a perfect outlet for people to express themselves.”

The 34th Street wall has become known for its various depictions of graffiti art in a safe and approved way. The wall varies in content from social justice expressions to intricate artistic creations.

The wall emphasized another point made by Hawkins: If people ask permission, they will protect the wall.

The city gives grants to artists who want to make murals or other wall art. The artists provided the materials and Keep Alachua County Beautiful provided the wall.

Pam Valcante, a retired art teacher and local muralist, received the 2020-2021 Alachua County Major Grant for Artists and intends to use that money to create a new mural.

It’s for that reason that many people are drawn to street art as a way of artistic expression. Large outdoor work can form messages and leave a bigger impact on the community than indoor and smaller art.

The key difference between murals and graffiti is that one is legal and the other illegal. Muralists are often commissioned for their work and ask permission before painting on walls.

But other than legality, the differences between the two are beginning to become unclear.

Graffiti is only found on murals on rare occasions. Usually, graffiti artists will leave murals alone in preference of buildings and public transit.

Valcante said that historically the differences are in terms of contextual information. Graffiti artists would usually spray paint symbols or words and would never sign using their real name, preferring to have a tag.

But street art is beginning to change. Now graffiti artists are not only using spray paint or markers but creating more intricate designs. And muralists sometimes are not signing their own names, also preferring to use nicknames.

“A lot of graffiti artists are now becoming more muralists,” Valcante said. “The boundaries between graffiti street art and muralists are blurring.”

The legality of street art then becomes an issue. If graffiti is not coming from gangs, then it is perceived by the police department to not be a problem.

Graham Glover, public information officer at the Gainesville Police Department, said that the graffiti surge in 2012 was due to two or three “taggers” in the city. The police department has not seen that level of graffiti since then.

Glover said that there were no recent arrests for graffiti. The methods of enforcement then are reliant upon self-reporting and the graffiti abatement program removing the vandalism before others see it.

Keep Alachua County Beautiful also provides graffiti education programs for middle school and high school students. This program, called Graffiti Hurts, is used as a way to educate young people on the destructive nature of vandalism and its implications on the community.

But this cycle of graffiti creation and removal, while sustainable for now, may need further evaluation as artistic expression begins to change street art in Alachua County.

Natalie is a reporter for WUFT News who can be reached by calling 352-392-6397 or emailing news@wuft.org.
Previous Gainesville Launching New Recycling Inspection Team
Next Traffic Changes Planned To Make University Avenue Safer For Pedestrians