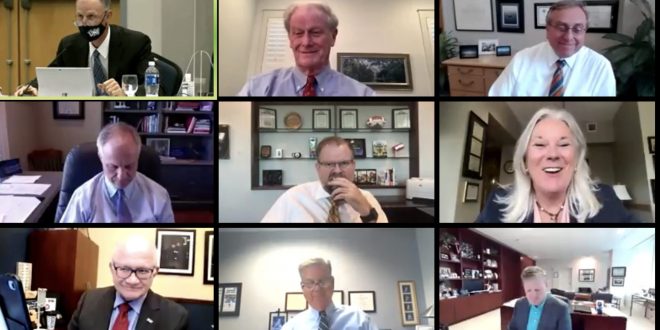 - The Board confirms the University of West Florida’s presidential reappointment of Dr. Martha Saunders: “Thank you for your trust. I’m honored to serve another year, “ Saunders said. “We’re doing meaningful work here at UWF, a part of the state that doesn’t always get a whole lot of attention, and we’re moving forward as proud members of the state university system.”

During a meeting at the University of North Florida on Thursday, the Florida Board of Governors heard presentations and voted on topics ranging from COVID-19 related research projects across the state university system to the effects of student wellness and success.

The board’s Drugs, Alcohol and Mental Health Task Force is responsible for identifying the best practices to inform the development of system-wide recommendations for effectively addressing the most critical issues for students.

Between March 2018 and March 2019, campus experts from across the system delivered presentations to the task force. They provided national and state-level data related to student use and abuse of drugs and alcohol and student mental health status. During this time, three critical issues emerged as the system’s highest priorities because of their direct and adverse impact on student academic performance.

First was the need to prevent, diagnose and treat misuse of alcohol and drugs. The second was the need to prevent poor mental health when possible and provide treatment as needed. Finally, the task force identified a need to coordinate care for students across the institution and within the community since universities have limited resources for treating students with severe substance abuse and mental health issues, England said.

The Board heard presentations on evidence-based research and national best practices regarding education, treatment and the continuum of care relative to student wellness. In March, the task force explained the short-term and long-term consequences of drug use among college students. Some include a reduced capacity for learning, memory loss, falling behind academically, a lower GPA and even death.

As a result of task force efforts, universities in the state system have been working to solve some critical issues.

One strategy that would impact student substance abuse and mental health was implementing a mental-health literacy program by a company called Kognito. England said the program can train faculty and staff to increase their awareness and build their knowledge and skills related to mental health and suicide prevention.

According to England, more than 50,000 faculty and staff across the state university system have taken Kognito training so far.

A second recommendation from the task force report would involve using metrics to monitor student mental health and drug and alcohol use across all 12 universities. To do this, the Council for Student Affairs identified specific metrics from the American College Health Association National College Health Assessment, which can assess and measure the initiative’s impact over time among students.

“The goal is to make healthy choices the easy choice,” said the Vice President of Student Affairs at Florida Agricultural and Mechanical University, William Hudson Jr.

With this assessment tool, the task force can calculate the frequency of alcohol, marijuana, and other drugs and mental health issues as reported by students. They can also look at how students are receiving treatment for mental health issues over twelve months. Due to COVID, some universities were unable to administer the assessment, while others had implementation disrupted.

“COVID-19 has had a significant impact on students, faculty, and staff. It’s important that we as a system and individually as institutions keep an eye on student mental health,” Hudson said.

After a presentation from the dean of the Florida Agricultural and Mechanical University College of Education, Traki L. Taylor, the Board approved a cognitive neuroscience doctoral program at Florida International University that will begin by fall 2021.

Taylor said the program would provide graduate training in various areas with broader STEM-related skills that would help better prepare graduates for both lab and field-based work. This, she said, would provide graduates with more opportunities for careers as managers, psychologists and post-secondary psychology teachers — jobs that are seeing growth both within the state of Florida and nationally.

“We see this as a collaborative arrangement with Florida Atlantic University who has a strong cognitive neuroscience program,” Florida International University Provost Kenneth Furton said.

For psychology majors, this would give them “a degree that is more productive, more competitive,” he said. “It’s really redirecting the students in our current program as a secondary track within the psychology degree in giving it a title of cognitive neuroscience.”

Separately, the board appointed Marsha Powers and Chris Corr to the University of Florida Board of Trustees.

Lamb said Powers has served well on the 13-member board and motioned for her reappointment, which passed without opposition.

Powers was named in 2019 by Becker’s Hospital Review as “one of the women leaders of hospitals and health systems to know.” The Florida Board of Governors appointed Powers in 2016.

Board of Trustees members serve for five years.

Following Power’s reappointment approval, Lamb recommended that Chris Corr, a previous board of trustees member, fill the remaining spot. Lamb said Corr currently serves as senior vice president of real estate and public affairs for Rayonier. He was the senior manager of community development for Walt Disney Imagineering and served as the Florida state representative from 1990 to 1992. Corr was also the executive vice president of AECOM, a civil engineering firm.

Lamb said Corr is also chair on the board of directors for Council 100 Florida, a private non-profit organization of business leaders who advise Florida’s state governor.

“Chris has, as you recalled, served on the Board of Governors as well as served our great state in many capacities,” Lamb said during his recommendation.

Corr’s appointment was also unanimously approved by the rest of the governors.

Both Powers and Corr must wait for the Senate’s confirmation and attend an orientation trustee training and an annual summit.

The two trustees, if approved by the Senate, will begin their terms on Jan. 7.

The next Board of Governors meeting is scheduled for Jan. 26 and Jan. 27 at the New College of Florida in Sarasota.

Mari is a reporter for WUFT News who can be reached by calling 352-392-6397 or emailing news@wuft.org.
Previous On Election Day, Democracy Rested In His Hands
Next The Point, Nov. 6, 2020: Weekend Recount Planned For Alachua County Growth Management Area Amendment