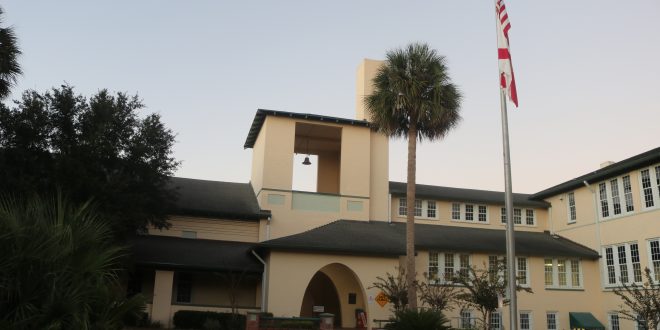 More than a dozen people waited outside the School Board meeting room at the county’s district office on East University Avenue to give their input on a wide range of issues from Buchoolz’s athletic facilities to the spread of COVID-19 among bus drivers. The room sat a limited capacity of people to comply with social distancing measures. (Marlowe Starling/WUFT)

Buchholz To Receive Athletic Facility Funding Amid Tensions Over Elections, Equity And Health

Tensions ran high Tuesday night at the Alachua County School Board district office on East University Avenue as the last voters cast their ballots at the polls.

The meeting began with words of praise for School Board Chair Eileen Roy, who is retiring this month, making Tuesday’s School Board meeting her last. Diyonne McGraw was recently elected to the School Board and will assume her role later this month.

Several speakers expressed disappointment that the meeting was being held on election night.

“There is no reason that anyone should be in this room on election night during a pandemic while major decisions are being made as a new school board member is about to take office,” said community activist, Chanae Jackson.

“They matter,” repeated one citizen after listing the names of Black Americans who have been killed: George Floyd, Trayvon Martin and Alton Sterling among them. “There’s some of us in the school district that feel like we do not matter. Please make us feel like we matter.”

Others referenced their personal losses of loved ones to COVID-19, including the recent death of Alachua County bus driver Ricky Davis, who was among the drivers sterilizing buses.

She implored board members to mandate COVID-19 testing every two weeks, noting the large number of bus drivers currently quarantining and lack of social distancing on buses.

“This is why it’s spreading,” she told board members. “Today is my birthday and I’m here because this is important to me. Help us. We don’t even want to come to work.”

Her 22-year-old son, a student at Bethune-Cookman University in Daytona Beach, has COVID-19 and pneumonia, she said. Her three grandchildren and other family members are also quarantining with the virus. She said she gets tested as often as she can and has not yet tested positive.

“I said, ‘God, you’re keeping me healthy so I can take care of everybody,’” Phillips told WUFT News.

Bus driver Mary Benson echoed concerns about the spread of the coronavirus among students and drivers, questioning the effectiveness of existing contact tracing efforts.

“We are the first people who open that door in the morning,” she said. “Somebody needs to talk to us.”

The School Board also voted to proceed with plans to rubberize the asphalt track, among other renovations at Buchholz High School. This despite concerns from some board members and citizens.

Funding for the improvements would come from the 1.5 millage rate on property taxes, which allows spending for athletic facilities. The total cost of the improvements will tentatively be upwards of $1.3 million and could take about a year to complete.

“We don’t have an issue with Buchholz’s track being paved; we have an issue with it being done now,” Jackson said to the board. “It benefits, yet again, the people who already have the resources. This is an equity issue, it’s lack of effective leadership, and this should not be done until November the seventeenth.”

The funding will not impact the general fund and will be funded over a two-year period, board member Gunnar Paulson said.

“We cannot afford to go in this direction at this time,” School Board vice chair Leanetta McNealy said.

The decision will be voted on again at the Nov. 17 meeting for possible rescinding.

Citizens and members of the Buchholtz community have asked for a rubberized track since before 1980, said Buchholz track and field coach Michael Lehning. Students currently have to “pay to play,” he said, requiring $200 per student to pay the cost of busing them to track meets elsewhere.

“It is unheard of in this state for a school the size and caliber of Buchholz to still have an asphalt track,” he said to School Board members Tuesday night.

Lehning, who has coached at Buchholz for three years, said he has coached track and field for the past 40 years in nine different Florida counties, all with better track conditions than Buchholtz. He called the asphalt track “unsafe and inappropriate.”

Alachua County School Board member Gunnar Paulson said the renovations won’t cost the county a dime once the funds are reimbursed through school revenues. Paulson was a longtime teacher and coach for football, wrestling and track and field at multiple schools, including Buchholz High School, Gainesville High School and the University of Florida.

“It’s a project that will pay for itself,” he said.

There are currently about 1,000 seats in the existing bleachers, Paulson said. The improvements would relocate the existing bleachers and add more, allowing the school to host its own track meets and attract greater turnout at games. Among the sports that are played on the field are football, track and field, soccer and lacrosse.

Paulson added that the light poles on the field were funded completely through fundraisers and donations from the Buchholz High community. He said Buchholz students deserve better athletic amenities, pointing to Gainesville High School’s expensive athletic amenities, including a tennis court that cost about half a million dollars.

Other community members and teachers strongly opposed funding athletic facilities during the pandemic, drawing attention to repairs and improvements needed in classrooms, such as HVAC systems for proper ventilation.

Board members closed the meeting with an intention to schedule a special meeting to discuss COVID-19 and regular testing of the district’s bus drivers.

Marlowe is a reporter for WUFT News who can be reached by calling 352-392-6397 or emailing news@wuft.org.
Previous Nov. 4, 2020: Evening News In 90
Next Florida Supreme Court Hears Darnell’s Case That Could Affect Sheriffs’ Budgets Statewide