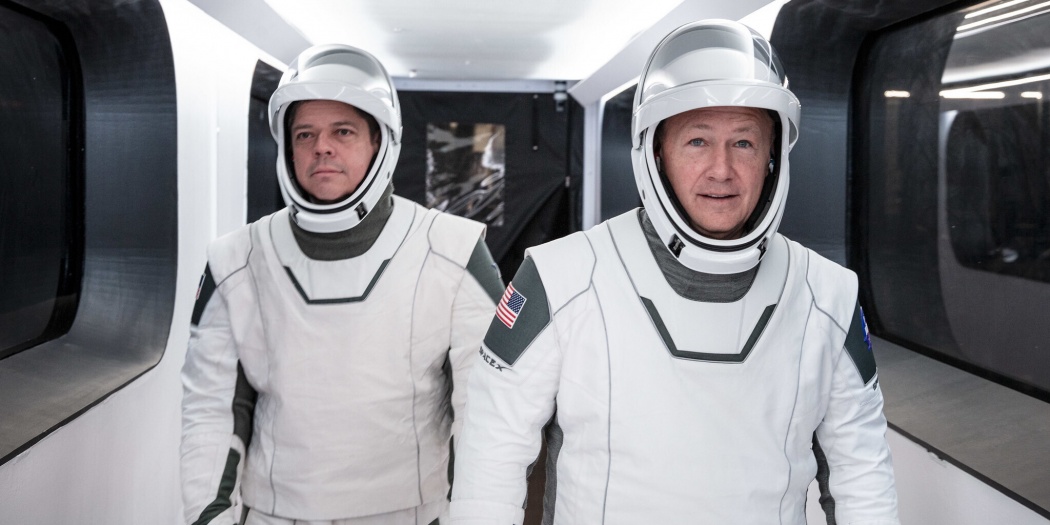 Astronauts Robert Behnken and Douglas Hurley test out their new space suits ahead of ahead of lasted year's unmanned launch. Behnken and Hurley will attempt to pilot the Crew Dragon capsule to the International Space Station on May 27, 2020. (Photo courtesy of NASA)

For the first time in nearly a decade, two NASA astronauts will strap in Wednesday for a rocket launch from Florida’s Space Coast, a significant milestone for a region hit hard by the retirement of the space shuttle.

The launch is targeted for 4:33 p.m. at the Kennedy Space Center. It’s the final test flight for the SpaceX Crew Dragon capsule. Two veteran NASA astronauts, Bob Behnken and Doug Hurley, will guide the craft to the International Space Station. The coronavirus pandemic complicated launch plans, forcing both NASA and local governments to issue new guidance for those hoping to view the launch in person.

For many along the Space Coast, the return to crewed flight — even amid the fear and uncertainty of a pandemic — brings back the excitement of past missions.

Merritt Island resident Mike McClure worked on the space shuttle for 22 years, a job he started within weeks of earning an engineering degree from the University of Florida. After nearly nine years of watching only unmanned launches, he’s excited for Wednesday but admittedly apprehensive.

“I was sick to my stomach every time. You’re just hoping and praying that everything goes well,” McClure said. “Launching rockets without people, sure, they cost a lot of money if they blow up, but it’s not the end of the world. Once you put people on board it’s a totally different ball game.”

Pedro Medelius, chair  of the National Space Club Florida Committee, says with the inherent risks comes the opportunity to reinvigorate the business of space exploration.

“It inspires the kids,” Medelius said.  “You saw that after the lunar landing, after probes landed on Mars – these were significant events where kids got very interested in STEM areas, science, technology, engineering and math.

This renewed spotlight on space promises to attract huge crowds — despite calls from some officials for people to stay away.

“We are asking people to join us in this launch, but to do so from home,” NASA Administrator Jim Bridenstine said at a May 1 news conference. “When we look back to the space shuttle launches, we had hundreds of thousands of people that would descend on the Kennedy Space Center… the challenge we’re up against right now is we want to keep everybody safe.”

Rather than traveling to Brevard for the launch, NASA has created a website where people can be a “virtual guest” for the launch.

“We are not going to keep the great Americans that want to come watch that from coming here,” Ivey told the press. “If NASA is telling people to not come here and watch the launch, that’s on them. I’m telling people what I believe as an American. And so NASA has got their guidelines, and I got mine.”

A Port Canaveral statement released May 20 says, “Due to the COVID-19 pandemic, and in alignment with federal and state guidance to minimize the potential for virus spread, access to popular launch viewing points at Port Canaveral will be limited, and traffic in and around the Port will be controlled.”

Wednesday’s launch will mark the start of Crew Dragon’s second and final demonstration mission. DEMO-2, as it’s called, was initially planned as a two-week round trip, but NASA later extended the mission in order to assist the short-staffed space station crew.

Behnken and Hurley could now spend anywhere from a month to 119 days on the space station, before their planned splashdown inside the Crew Dragon capsule about 24 nautical miles off the coast of Jacksonville.

After its return to Earth, NASA and SpaceX will conduct a thorough review with the goal of certifying Crew Dragon to ferry more astronauts to the International Space Station, ending U.S. reliance on Russian Soyuz rockets as the only path to the scientific outpost since the shuttle program ended.

While SpaceX — founded by CEO Elon Musk — hopes to get the honor of being the first to end the drought, competitor Boeing is just one uncrewed test flight away from launching astronauts to the space station with its Starliner capsule. This renewed competition between aerospace companies means a rocket launches from the Space Coast roughly every two weeks.

The future of the aerospace landscape will be, in part, determined by the success or failure of Wednesday’s launch. Space Coast locals, and space enthusiasts across the state and country, are anxiously waiting for the launch countdown clock to reach zero.

“With this crazy virus it’s kind of complicated, but normally Brevard County would be loving all the people coming to town for the launch,” McClure said. “I gotta believe it’ll be a definite boost for the economy here in Brevard County. All this private competition could lead to bigger and better things down the road, and this is a first step in that direction.”

Houston is a reporter for WUFT News who can be reached by calling 352-392-6397 or emailing news@wuft.org.
Previous The Point, May 26, 2020: Federal Judge Rules Against Florida’s Felon Voting Rights Law
Next One-Time Busboy Challenges Florida Governor’s Emergency Powers In Pandemic Dispute